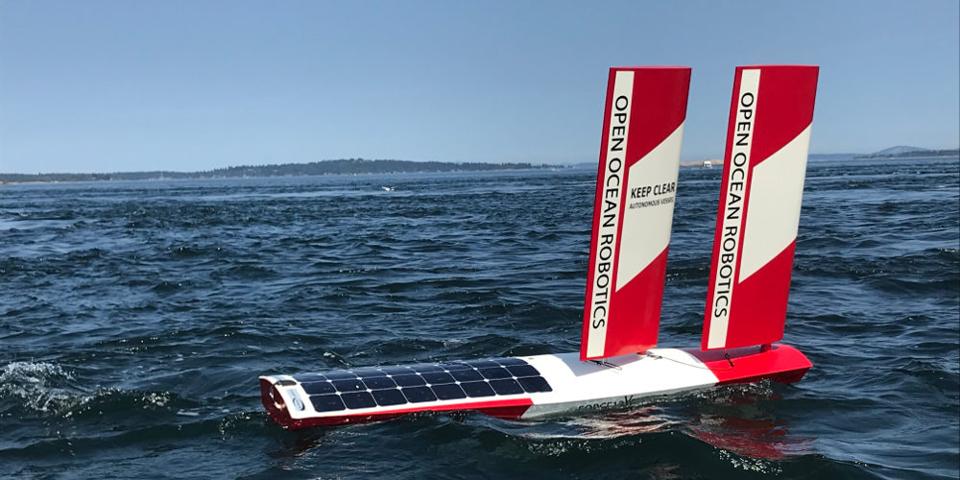 Prototype of the Force 12 Xplorer being tested near Victoria, British Columbia.
It uses a rigid wingsail for propulsion
photo : Colin Angus

From Forbes by Jeff Kart

It’s been a great year for Open Ocean Robotics, a British Columbia-based startup that makes solar-powered drones that can gather environmental data in real time and help address a multitude of issues.

During 2019, Open Ocean Robotics won a most-promising startup award from the National Community for Angels, Incubators, and Accelerators; $100,000 in a Spring Impact Investor Challenge; and was a finalist in a New Ventures BC Competition, to name a few.

“This winter, we’ll conduct sea trials during big winter storms, where our boats could encounter waves that are 50 feet or larger,” says CEO Julie Angus.
“Our boat will repeatedly capsize during these conditions, but its self-righting design will enable it to continue operating.
“The boat is outfitted with a whole suite of sensors to measure its performance and how it handles these conditions, as well as the environment around it.
While we’ve tested its performance in simulated environments, there is no substitution for actually being in these epic waves and we’re excited to learn how it handles these waves.” 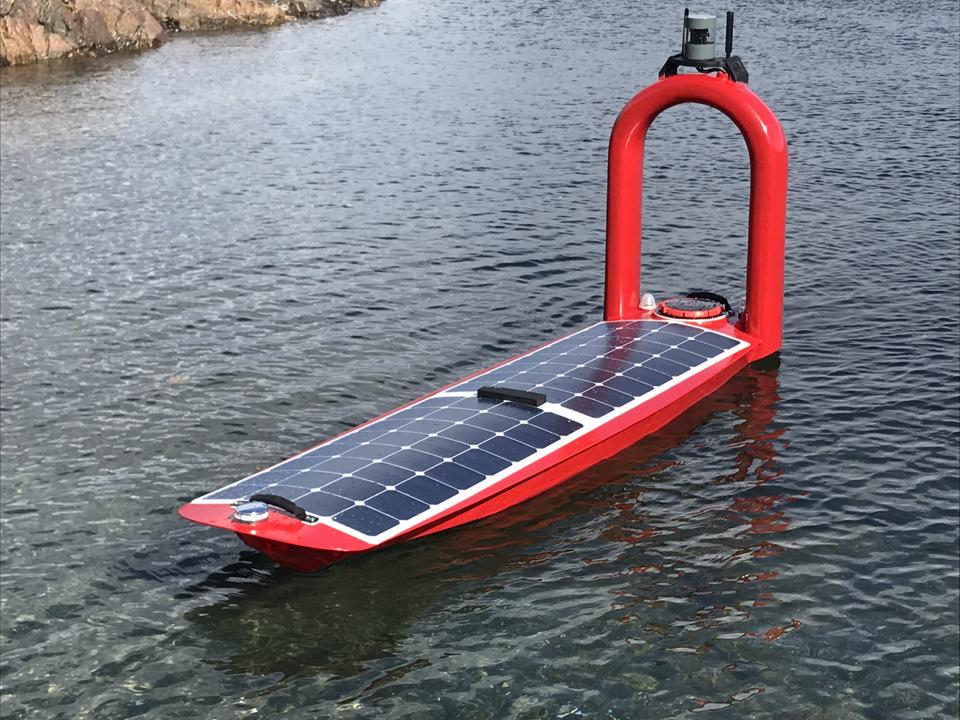 The startup’s ocean drones can be used to collect all kinds of ocean and environmental data.
They’re solar-powered, and can reportedly stay on the ocean for up to a year, continuously collecting data, and send it to a user in real time using satellite and other communication systems.

That translates to precise information on marine weather conditions and more accurate forecasts, which can help optimize ship routing, cut fuel use and in turn reduce greenhouse gas emissions.

The boats are equipped with 360-degree cameras, ship-tracking intelligence known as AIS and remote-sensing LIDAR (which uses lasers).

“Because our vessels are entirely solar-powered, they produce no greenhouse gases, noise pollution or risk of oil spills, and by using them instead of a diesel-powered ship, you can have a significant impact on emission reductions,” Angus adds.

So far, the Victoria, British Columbia, company has done testing in the Pacific Ocean near Vancouver Island.
The longest mission to date was a 54-hour, non-stop run totaling 74 kilometers (almost 46 miles), Angus says.
It occurred during the darker, rainy days of November, but 85% of the battery capacity remained at the end of the run.
Try that with your smartphone.
“We’ve demonstrated our vessel’s ability to voyage autonomously as well as remotely, go on multi-day missions, collect oceanographic data and transmit in by cellular or satellite communications,” she added.

Plans for 2020 also include collecting data for customers.

The first pilot project is with the Canadian Coast Guard, to use a boat for seafloor mapping in shallow waters, which is critical for navigational safety and understanding the oceans.
Angus notes that less than 20% of the world’s oceans are mapped and in some regions, such as the Canadian Arctic, only 1% is mapped to modern-day standards.

She says autonomous technology can play a significant role in helping map the oceans by making it safer, easier and more affordable to collect the data.
Other companies in the space include Saildrone, which launched its first Atlantic to Mediterranean mission in November.

Open Ocean Robotics also is working with partners including Oceans and Fisheries Canada to collect other data including information on weather, currents and temperature.


Besides being the CEO, Angus also is co-founder of Open Ocean Robotics, and an adventurer.
She was the first woman to row across the Atlantic Ocean from mainland to mainland, among other accomplishments.
Her partner and the startup’s co-founder Colin Angus was the first to circle the globe exclusively by human power.
To top it all off, Julie Angus is one of six women finalists in the Women in Cleantech Challenge, which came with $850,000 in support and the chance to win another $1 million prize to be awarded in the winter of 2020-2021.