Fukushima fishermen concerned for future over release of radioactive water 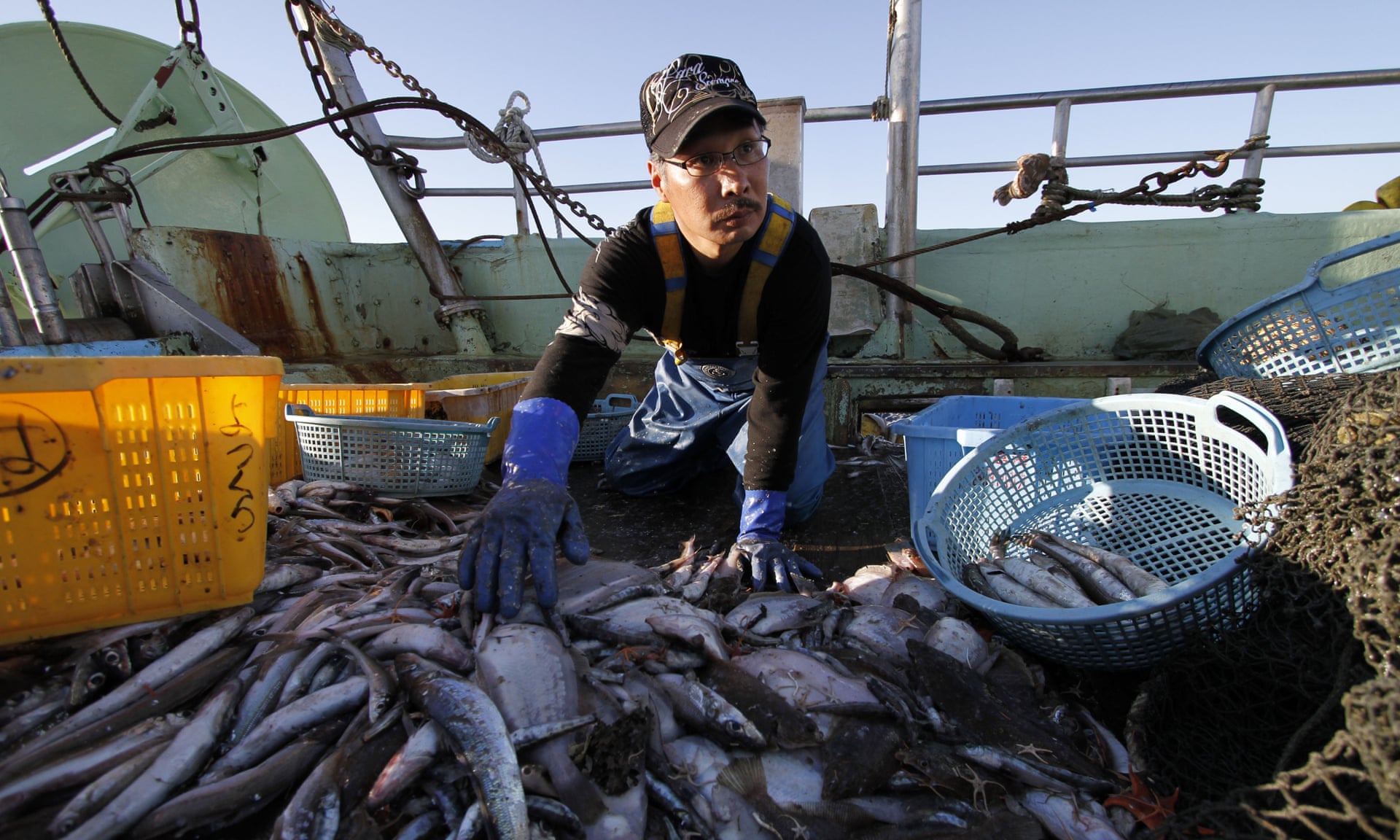 Last year’s catch was just 16% of pre-crisis levels, partly because of the Japanese public’s reluctance to eat fish caught off Fukushima due to the radioactive water.
Photograph: Koji Ueda/AP

From The Guardian by Justin McCurry

On the afternoon of 11 March 2011, Tetsu Nozaki watched helplessly as a wall of water crashed into his boats in Onahama, a small fishing port on Japan’s Pacific coast.

Nozaki lost three of his seven vessels in one of the worst tsunamis in Japan’s history, part of a triple disaster in which 18,000 people died.
But the torment for Nozaki and his fellow fishermen didn’t end there.
The resulting triple meltdown at the nearby Fukushima Daiichi nuclear power plant forced the evacuation of more than 150,000 people and sent a plume of radiation into the air and sea.

It also came close to crippling the region’s fishing industry.

Having spent the past eight years rebuilding, the Fukushima fishing fleet is now confronting yet another menace – the increasing likelihood that the nuclear plant’s operator, Tokyo Electric Power (Tepco), will dump huge quantities of radioactive water into the ocean.

“We strongly oppose any plans to discharge the water into the sea,” Nozaki, head of Fukushima prefecture’s federation of fisheries cooperatives, told the Guardian.

Nozaki said local fishermen had “walked through brick walls” to rebuild their industry and confront what they say are harmful rumours about the safety of their seafood.
Last year’s catch was just 16% of pre-crisis levels, partly because of the public’s reluctance to eat fish caught off Fukushima. 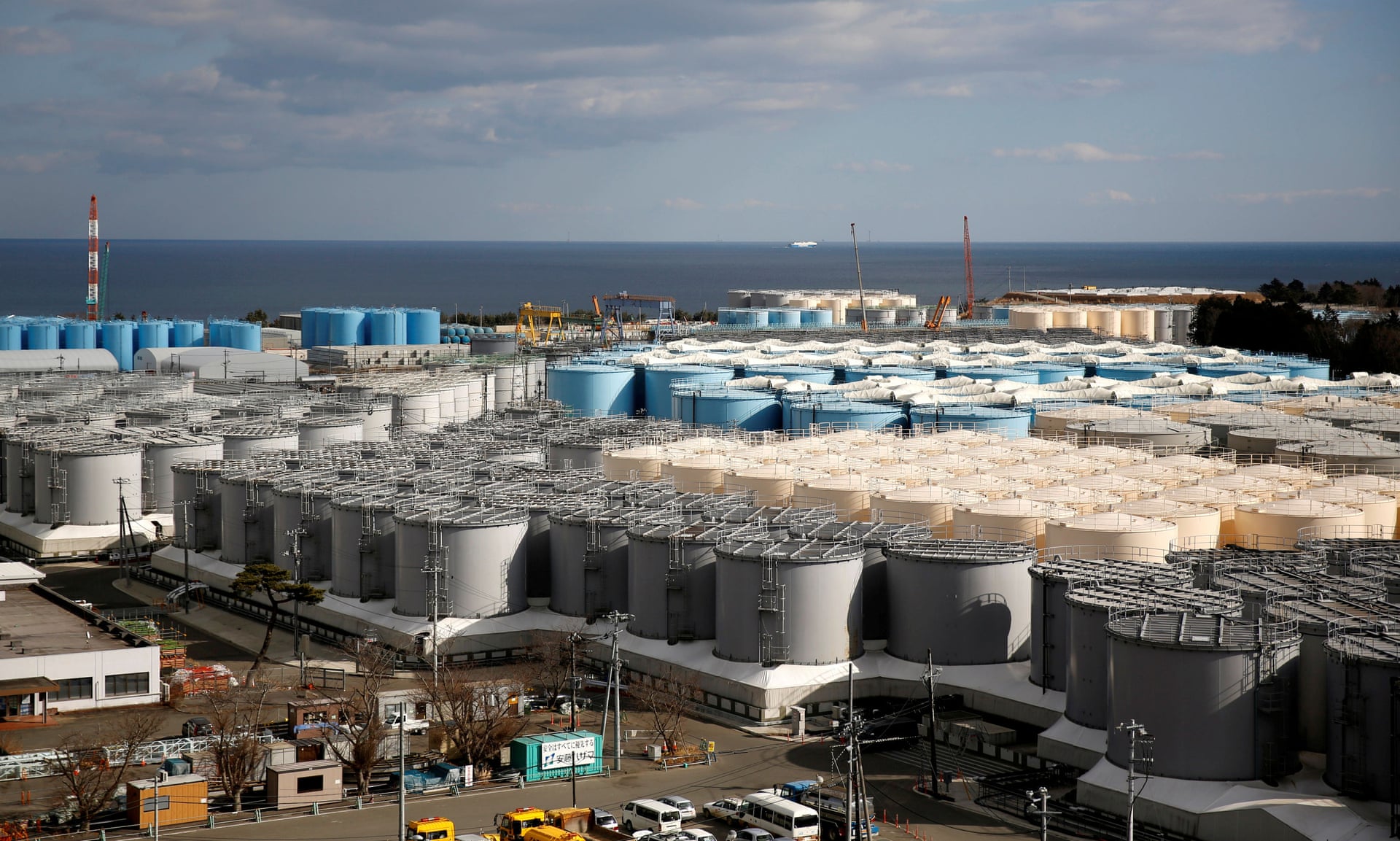 Currently, just over one million tonnes of contaminated water is held in almost 1,000 tanks at Fukushima Daiichi, but the utility has warned that it will run out of space by the summer of 2022.

Tepco has struggled to deal with the buildup of groundwater, which becomes contaminated when it mixes with water used to prevent the three damaged reactor cores from melting.
Although the utility has drastically reduced the amount of wastewater, about 100 tonnes a day still flows into the reactor buildings.

Releasing it into the sea would also anger South Korea, adding to pressure on diplomatic ties already shaken by a trade dispute linked to the countries’ bitter wartime history.

Seoul, which has yet to lift an import ban on Fukushima seafood introduced in 2013, claimed last week that discharging the water would pose a “grave threat” to the marine environment – a charge rejected by Japan.

Fukushima fisheries officials point out that they operate a stringent testing regime that bans the sale of any seafood found to contain more than 50 becquerels of radioactive material per kilogram – a much lower threshold than the standard of 100 becquerels per kilogram observed in the rest of Japan. 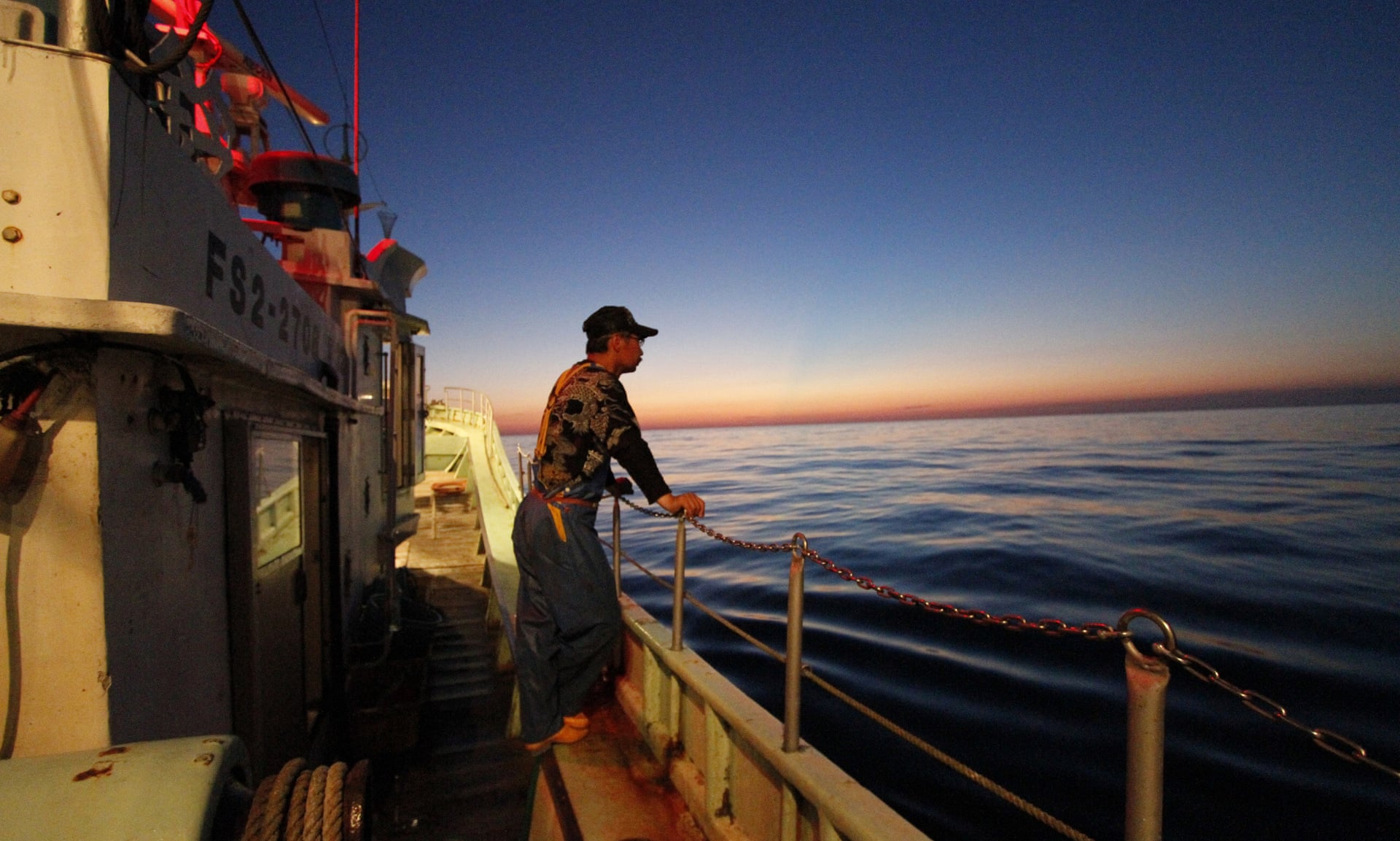 Just over one million tonnes of contaminated water is held in almost 1,000 tanks at Fukushima Daiichi.
Photograph: Koji Ueda/AP

At Onahama’s testing centre, just metres from where the catch is unloaded, eight employees conduct tests that last between five and 30 minutes depending on the size of the sample.
“Tepco has said that the water can be diluted and safely discharged, but the biggest problem facing us is the spread of harmful rumours,” Hisashi Maeda, a senior Fukushima fisheries official, said as he showed the Guardian around the facility.

Confirming Maeda’s fears, almost a third of consumers outside Fukushima prefecture indicated in a survey that dumping the contaminated water into the sea would make them think twice about buying seafood from the region, compared with 20% who currently avoid the produce.

Tepco’s Advanced Liquid Processing System removes highly radioactive substances, such as strontium and caesium, from the water but the system is unable to filter out tritium, a radioactive isotope of hydrogen that coastal nuclear plants commonly dump along with water into the ocean.
In addition, Tepco admitted last year that the water in its tanks still contained contaminants beside tritium.

Supporters of the discharge option have pointed out that water containing high levels of tritium, which occurs in minute amounts in nature, would not be released until it has been diluted to meet safety standards.

But Shaun Burnie, a senior nuclear specialist with Greenpeace Germany who regularly visits Fukushima, said a proportion of radioactive tritium had the potential to deliver a concentrated dose to cell structures in plants, animals or humans.
“Dilution does not avoid this problem,” he said. 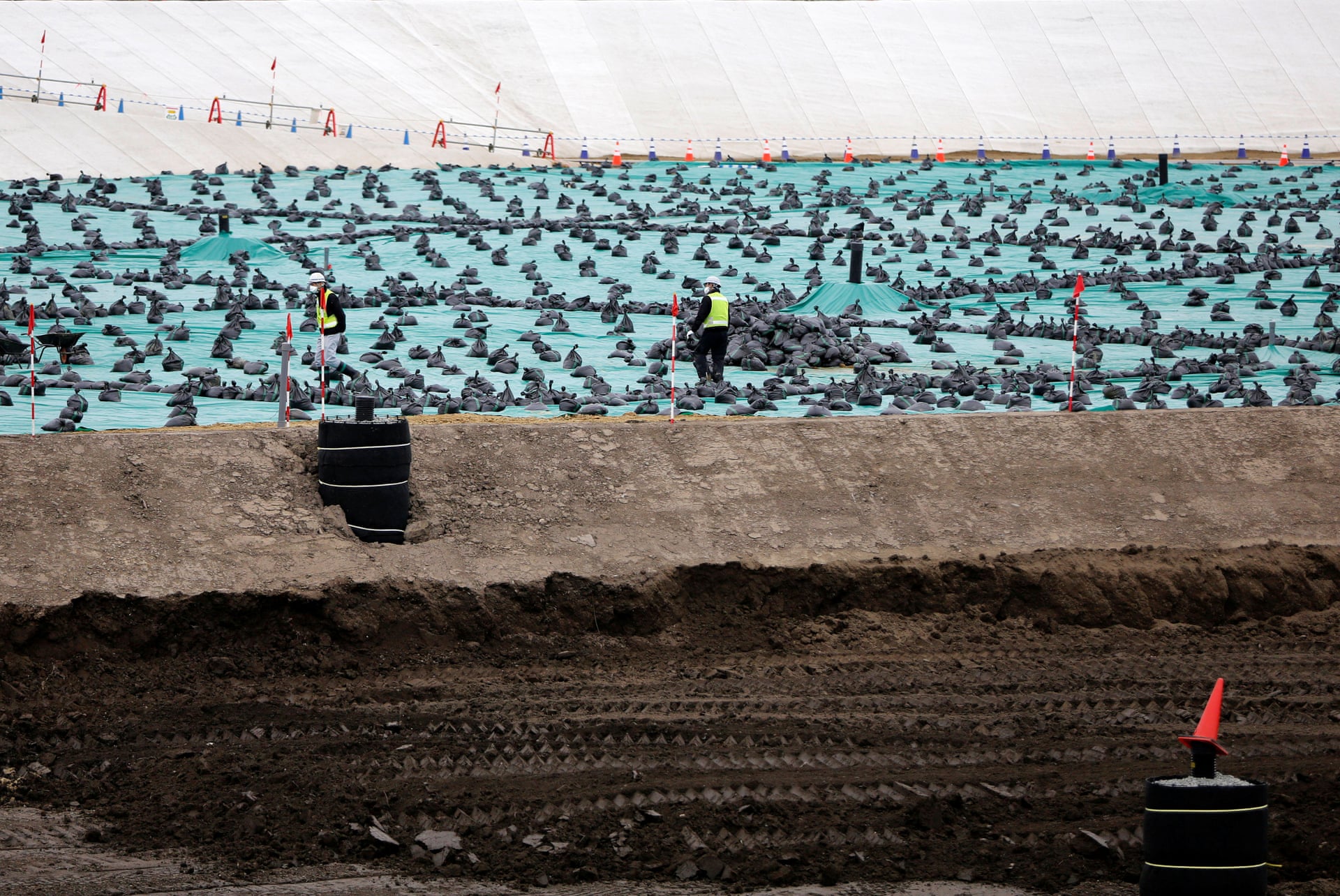 Rows of black bags at a soil storage facility in Fukushima.
Not a single location in the entire country has agreed to accommodate the toxic waste.
Photograph: Issei Kato/Reuters

Burnie believes the solution is to continue storing the water, possibly in areas outside the power plant site – a move that is likely to encounter opposition from nuclear evacuees whose abandoned villages already host millions of cubic metres of radioactive soil.

“There is no short-term solution to the water problem at Fukushima Daiichi, as groundwater will continue to enter the site and become contaminated,” Burnie said.
“A major step would be for the government to start being honest with the Japanese people and admit that the scale of the challenges at the site mean their entire schedule for decommissioning is a fantasy.”
‘No other option’

Government officials say they won’t make a decision until they have received a report from an expert panel, but there are strong indications that dumping is preferred over other options such a vaporising, burying or storing the water indefinitely.

Shinjiro Koizumi, the new environment minister, has not indicated if he shares his predecessor’s belief, voiced last week, that there is “no other option” but to discharge the water into the sea.

The International Atomic Energy Agency has recommended that Japan release the treated water, while Toyoshi Fuketa, the chairman of Japan’s Nuclear Regulation Authority, said a decision on its future must be made soon.
“We are entering a period in which further delays in deciding what measure to implement will no longer be tolerable,” Fuketa said, according to the Asahi Shimbun.

Putting off a decision could delay work to locate and remove melted fuel from the damaged reactors – a process that is already expected to take four decades.

Critics say the government is reluctant to openly support the dumping option for fear of creating a fresh controversy over Fukushima during the Rugby World Cup, which starts this week, and the buildup to the 2020 Tokyo Olympics.

Nozaki said he and other fishermen throughout Fukushima would continue the fight to keep the water out of the ocean.
“Releasing the water would send us back to square one,” he said.
“It would mean the past eight years have amounted to nothing.”