Levels of radioactive contamination in fish caught off the east coast of Japan remain raised, official data shows.
It is a sign that the Dai-ichi power plant continues to be a source of pollution more than a year after the nuclear accident.

About 40% of fish caught close to Fukushima itself are regarded as unfit for humans under Japanese regulations.
The respected US marine chemist Ken Buesseler has reviewed the data in this week's Science journal.
He says there are probably two sources of lingering contamination.
"There is the on-going leakage into the ocean of polluted ground water from under Fukushima, and there is the contamination that's already in the sediments just offshore," he told BBC News.
"It all points to this issue being long-term and one that will need monitoring for decades into the future."
Prof Buesseler is affiliated to the US Woods Hole Oceanographic Institution (WHOI).
His evaluation covers a year's worth of data gathered by the Japanese Ministry of Agriculture, Forestry and Fisheries (MAFF). 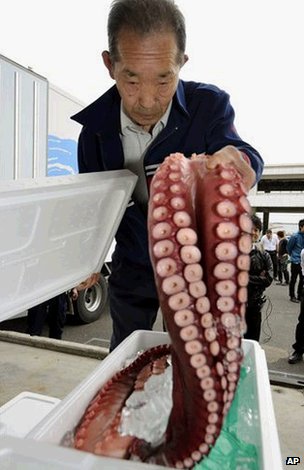 Its monthly records detail the levels of radioactive caesium found in fish and other seafood products from shortly after the March 2011 Tohoku earthquake and tsunami - the double disaster that triggered the Fukushima crisis.
The caesium-134 and 137 isotopes can be traced directly to releases from the crippled power station.
MAFF uses the information to decide whether certain fisheries along five east-coast prefectures, including Fukushima, shoul

The caesium does not normally stay in the tissues of saltwater fish for very long; a few percent per day on average should flow back into the ocean water.
So, the fact that these animals continue to display elevated contamination strongly suggests the pollution source has not yet been completely shut off.
He notes that although caesium levels in any fish type and on any day can be highly variable, it is the bottom-dwelling species off Fukushima that consistently show the highest caesium counts.

For the WHOI researcher, this points to the seafloor being a major reservoir for the caesium pollution.
"It looks to me like the bottom fish, the fish that are eating, you know, crabs and shellfish, the kinds of things that are particle feeders - they seem to be increasing their accumulation of the caesium isotopes because of their habitat on the seafloor," he explained.
Prof Buesseler stresses however that the vast majority of fish caught off the northeast coast of Japan are fit for human consumption. 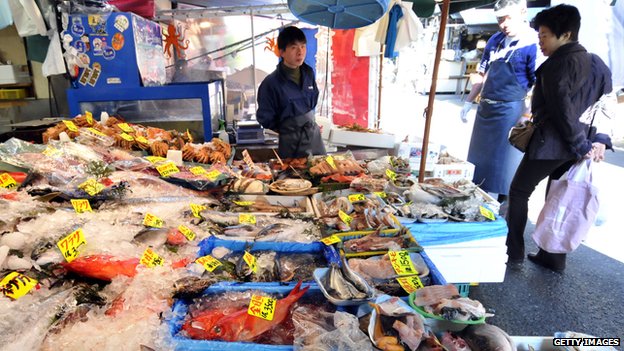 And while the 40% figure for unsafe catch in the Fukushima prefecture may sound alarming, the bald number is slightly misleading.
Last April, the Japanese authorities tried to instil greater market confidence by lowering the maximum permitted concentration of radioactivity in fish and fish products from 500 becquerels per kilogram of wet weight to 100 Bq/kg wet.
This tightening of the threshold immediately re-classified fish previously deemed fit as unfit, even though their actual contamination count had not changed.
It is also worth comparing the Japanese limit with international standards. In the US, for example, the threshold is set at 1,200 Bq/kg wet - significantly more lenient than even the pre-April Japanese requirement.

And Prof Buesseler makes the point that some naturally occurring radionuclides, such as potassium-40, appear in fish at similar or even higher levels than the radioactive caesium.
Nonetheless, the contamination question is a pertinent one in the Asian nation simply because its people consume far more fish per head than in most other countries.
"At one level, there shouldn't be any surprises here but on another, people need to come to grips with the fact that for some species and for some areas this is going to be a long-term issue; and with these results it's hard to predict for how long some fisheries might have to be closed," said the WHOI scientist.

Prof Buesseler, with Japanese colleagues, is organising a scientific symposium in Tokyo on 12/13 November to present the latest thinking on Fukushima and its impacts on the ocean.
The information will then be shared with the public in a free colloquium on 14 November.d be opened or closed (it is not a measure of contamination in actual market fish).