Plankton haven’t been the same since the industrial revolution

Planktonic foraminifera assemblage from Caribbean sediments that provide an accurate picture of the species community before human influence.
Each shell is less than one millimeter in size.
A clever study finds that communities of foraminifera, a hard-shelled kind of plankton, have transformed dramatically since the Industrial Revolution.
(Michal Kucera)

From The Smithsonian by Maddie Burakoff

As scientists scramble to figure out how warming ocean temperatures will affect marine ecosystems across the globe—from bleaching coral reefs to altered migration routes—one of the sea’s most ubiquitous organisms is helping researchers measure the changes that have already occurred.
Centuries of fossil records and live-capture data show that some marine plankton populations reflect a clear change in response to human industrialization and the warming oceans that have come with it.

Researchers found distinct differences between communities of planktonic foraminifera—tiny single-celled creatures that float in ocean waters—from before and after the start of the industrial era about 170 years ago, according to a study published this week in Nature.
The ratio of plankton species in these communities shifted in proportion to changes in sea temperature, indicating that ocean warming has deeply altered these populations and their wider marine ecosystems. 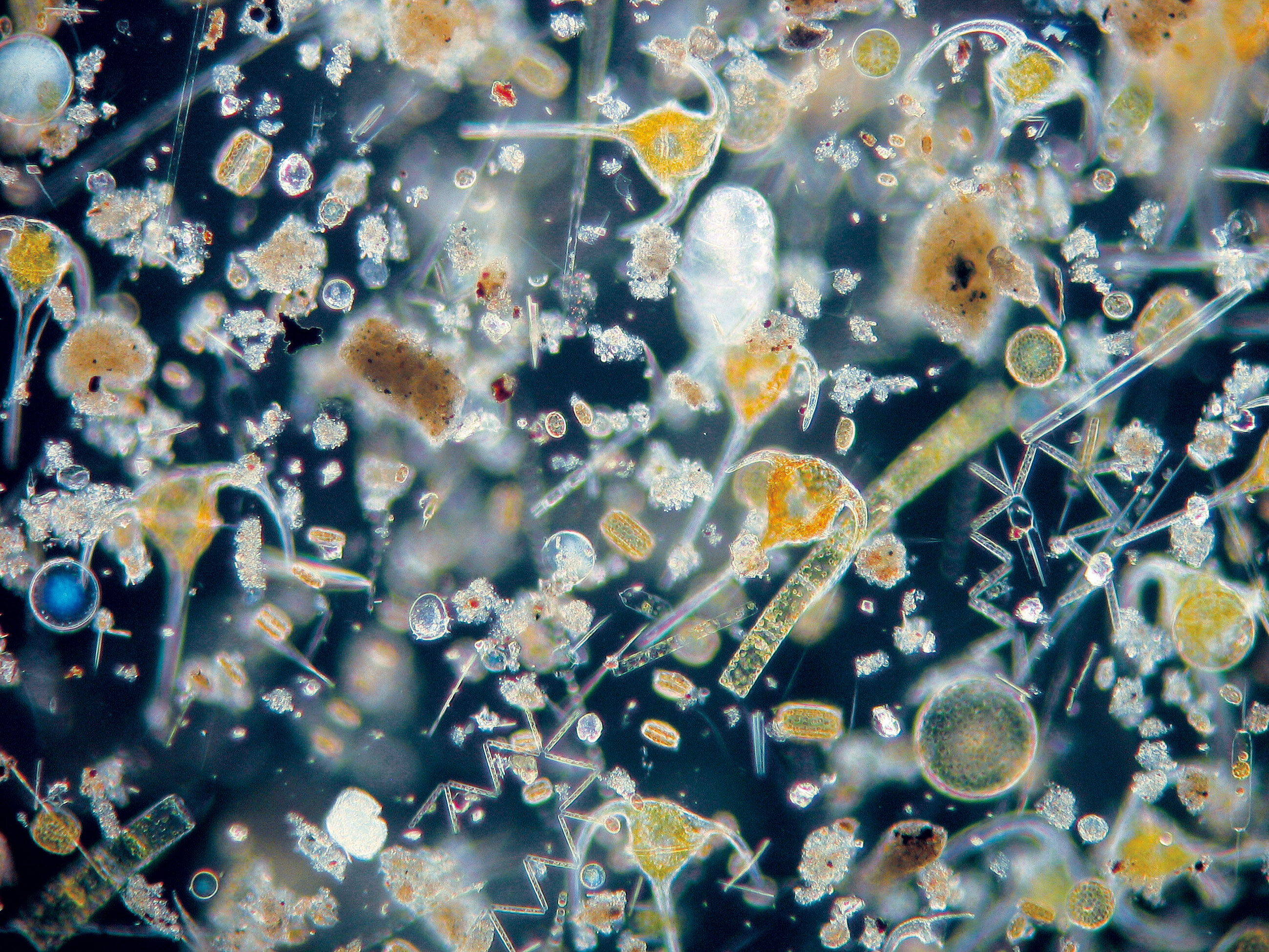 While the idea that climate change affects marine life isn’t new, the plankton study incorporates an unusually complete data set that spans the globe and cuts deep into past centuries to reaffirm humanity’s impact on the oceans.

Planktonic foraminifera provide a comprehensive fossil record because their hard calcite shells are preserved well in sediment layers at the bottom of the ocean, says lead author Lukas Jonkers, a paleontological oceanographer at the University of Bremen in Germany.
The organisms also populate waters all across the world.
Though rare in the surface ocean, planktonic foraminifera are abundant at greater depths, and in some places they carpet entire swaths of the sea floor, Jonkers says.

Recovery of a sediment trap on board the research vessel Meteor in the tropical North Atlantic Ocean. Such sediment traps provide information on modern planktonic foraminifera species communities, which were found to be systematically different from pre-industrial communities from sediments.
(Christiane Schmidt)

“We can really compare very well the distribution of the species in the modern [era] with the past,” Jonkers says.
“There's not so many zooplankton groups where the fossil records are so well preserved.
In fact, I don't think there's any.”

To understand the state of these communities before the industrial era kicked off, Jonkers and his team analyzed more than 3,700 previously collected samples from sediment layers on the bottom of the ocean.
Based on how fast sediment accumulates and mixes on the seafloor, scientists estimated that the top layer of sediment cores—basically “cylinders of mud” pulled up from the bottom of the ocean—would contain fossils that are couple of centuries old, Jonkers says, predating the industrial revolution.

The team then compared these pre-industrial samples with more recent data collected using sediment traps, which are funnels moored to the seafloor that grab anything falling down from the ocean’s upper layers (including the plankton that drift through the water).
Using information collected from 1978 to 2013, researchers discovered that planktonic foraminifera communities changed markedly during the time period between the deposit of the seafloor fossils and the organisms caught in sediment traps.

The shift, measured by comparing the relative abundances of dozens of plankton species within the samples, doesn’t appear to be random.
The amount of change in the plankton communities correlated with the degree of documented temperature change in the surrounding waters.
The direction of shifting communities also largely lined up with patterns of ocean temperature change, as authors found when they matched up seafloor fossils with their closest analogues in modern communities.

With the data showing a match in both the degree and the direction of change, Jonkers says he’s confident that temperature is the driving force for the shifts in planktonic foraminifera populations.
“I was expecting to see a difference and an effect of global change,” Jonkers says.
“But I hadn't expected that the signal would be so clear.”

The new study replicates on a global scale what other researchers have found in specific areas, says David Field, a marine scientist at Hawaii Pacific University who has researched planktonic foraminifera but was not involved in this study.
While scientists have yet to fully unravel why exactly plankton communities are changing, the evidence from this study and others clearly points to ocean warming as the likely cause, either as a direct influence or as an indirect driver of other aspects of the underwater environment, Field says.

Comparing sediment-trap samples to seafloor fossils might not be a perfect analogy—differences in preservation could be a possible influence on the data—but Field says the authors’ evidence provides compelling support for the huge influence of ocean warming on marine species.
“This indicates that warming began to have an effect on marine ecosystems a long time ago, even before we were keeping good records on it,” Field says.
“We can expect much more impact of ocean warming on ecosystems in the future.
Oceans are going to continue to change in ways we haven’t seen before.”

Planktonic foraminifera may not be as majestic as whales or sea stars, but the breadth of their fossil record provides a useful baseline to confirm a wider trend of ocean life changing in response to human activity.
Shifts in plankton communities are a concerning indicator of the “bigger picture” for marine ecosystems as ocean temperatures continue to rise at increasing rates, Jonkers says.“The question is, what will happen with climate change progressing?” Jonkers says.
“Even at one degree [of temperature change], we already see large changes in planktonic foraminifera, and probably also in other marine biota.
That means that all these species have to adapt, and at the moment, we don't know if they can, or if they can do so fast enough.