France has just one Riviera, but 36 coasts The mapmaker has tried to match the color on the map with the one referenced in the coastal names (e.g. the Côte d'Argent is silvery-grey, the Côte deJadee is green, etc.)
source : Reddit

Name one French coastline. Great.
Now name another. Can't?
Here are all 36. 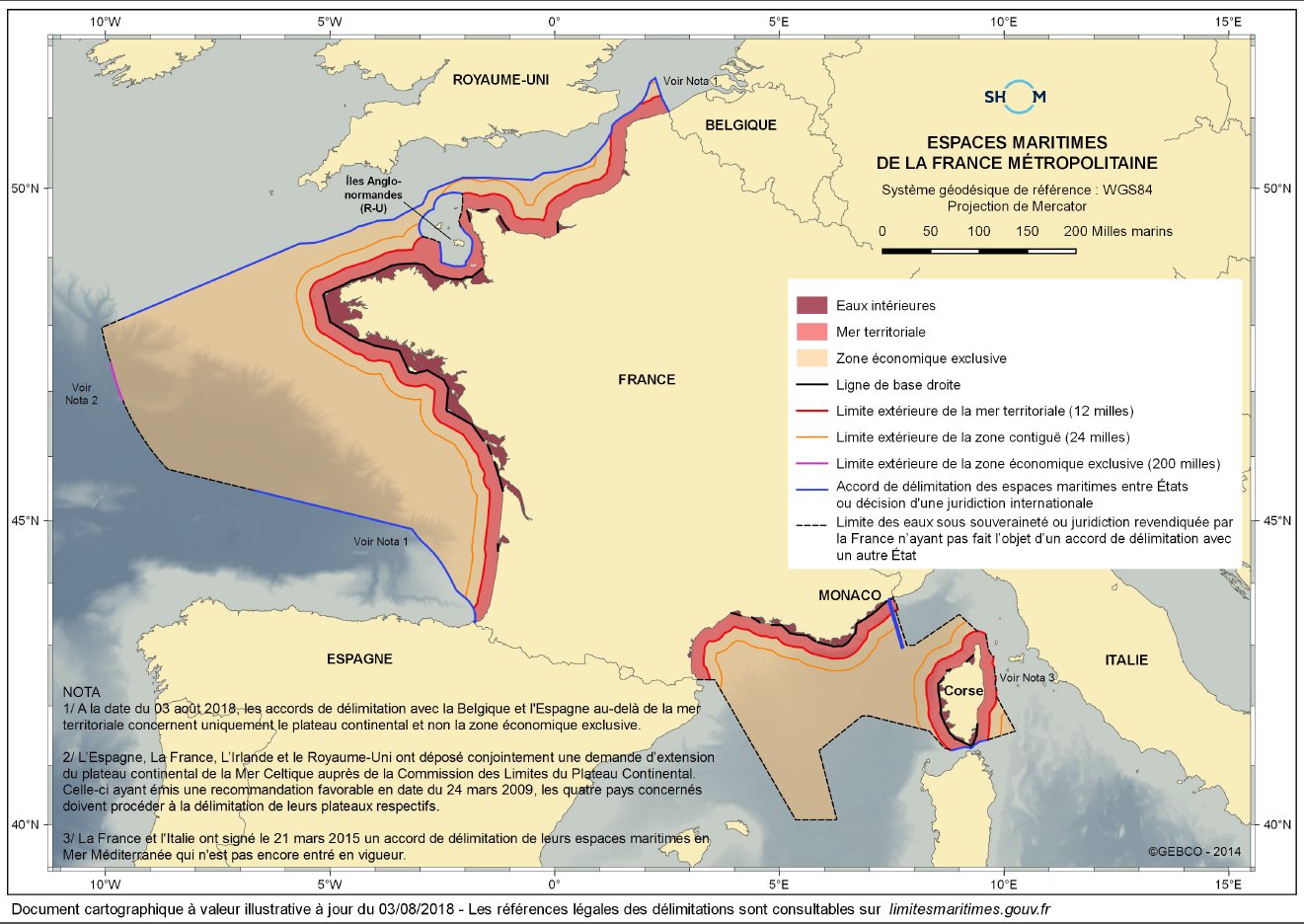 Despite a number of recent high-profile terrorist attacks, France remains the world’s most visited country.
The numbers are going up, in fact: last year, the French welcomed 89 million foreign tourists, 8% more than in 2016.

But how familiar are those visitors with the many splendors of France?
Here’s a test: quickly, name your favorite French museum, city, wine region and beach.
Most likely answers: the Louvre, Paris, Bordeaux (or Burgundy) and the Côte d'Azur.

Hot and glamorous, the Côte d'Azur is the jewel in the crown of French seaside tourism.
It’s also crowded and pricey.
However, as this map shows, it’s just one of 36 named coastlines stretching along the country’s Atlantic and Mediterranean shores.

Commonly referred to in English as the French Riviera, the Côte d'Azur covers the eastern part of France’s Mediterranean coast.
The term was coined by Stéphen Liégeard, who used it as the title for his 1887 book about his travels along the coast of the Provence in France and beyond, to Genoa in Italy.
'Azure' is the heraldic term for 'blue'; he was perhaps inspired by his home département of Côte d’or. 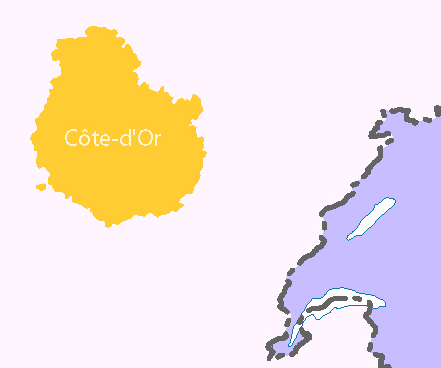 Côte also means 'slope', and in the case of the Côte d'Or, the color refers to the vines in autumn.
The Côte d'Or is in the wine-making region of Burgundy; its capital is Dijon.

'Côte d'Azur' quickly caught on, but only for the French part of the coast.

Hoping to emulate the success of their azure counterpart, many other French coasts were named soon thereafter, often after minerals, metals or colors.
Each has its own particular history, climate, geography and charm.

Below is a sample of some of the more remarkable stretches. 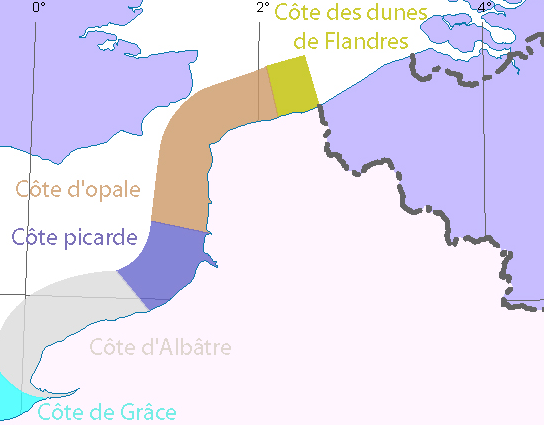 The Côte d'Opale (Opal Coast) was named in 1911 by local Édouard Lévêque, in homage to the region's changeable light.
Go here for two illustrious capes: Blanc-Nez ('White Nose') and Gris-Nez ('Grey Nose'), the closest point between Europe and England, only 34 km (21 mi) from the white cliffs of Dover.

The Côte Fleurie (Flowered Coast) refers to the flowering apple trees in the interior.
Dotting the coast are Deauville, Honfleur and other renowned seaside resorts – not forgetting Balbec, the fictional one from Proust's A la recherche du temps perdu.

The beaches of the Cote de Nacre (Mother-of-pearl Coast) are better known by their D-Day code names: Gold, Juno and Sword.

The Côte de granit rose (Pink Granite Coast) is one of three pink granite coasts in the world: the others are on Corsica and in China.

The Ceinture dorée (the Golden Belt) was so named applied around 1880, in reference to the region’s rich horticultural tradition. It's where the so-called johnnies come from: cross-Channel migrant workers who established the archetype of the French onion-seller in Britain. 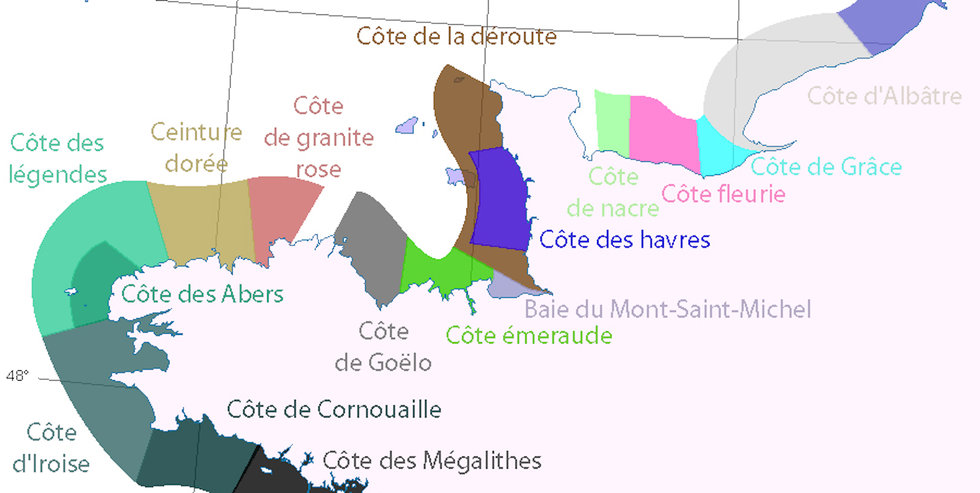 The Côte des Légendes (Coast of Legends): The legends refer to the family of giants that once lived here, and threw rocks around, resulting in the huge granite boulders that mark this coastline.

The Côte des Abers (Coast of Inlets): In 1978, the Amoco Cadiz sank in this area, creating one of the world's most notorious oil spills.

The Côte de Cornouaille (The Coast of Cornouaille): In the early Middle Ages, the region was settled by princes from Cornwall, hence the name.
Much later, Gauguin was a frequent visitor.
A spectacular outcrop, the Pointe du Raz is a Brittany's most visited natural feature.

The Côte d'Amour (Coast of Love): The name, chosen in 1913 by the readers of a weekly magazine, does not – as claimed by some – refer to the prevalence of love-making on the beaches.

The Côte de Jade (Jade Coast): Legend has it that the name was thought up by a local mayor, who suddenly noticed that his socks had the same color as the ocean. 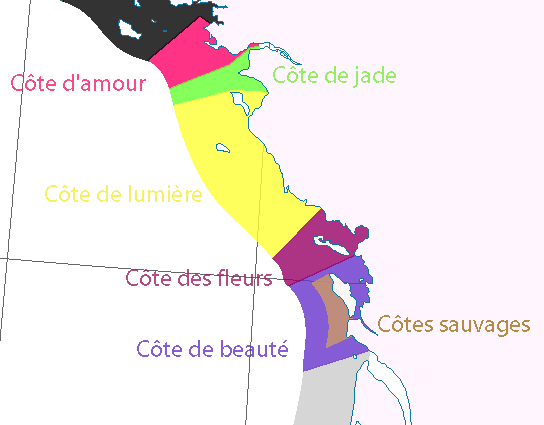 The Côte de Lumière (The Coast of Light): Location of Les Sables-d'Olonne, the only resort on France's Atlantic Coast endowed with not one, but two casinos.

The Côte de Beauté (Coast of Beauty): Named in 1931 in the course of a Miss Europe contest.

The Côte camarguaise (Coast of the Camargue): The Rhône river delta is Europe's largest wetland – a wild and undeveloped zone contested by land and water. 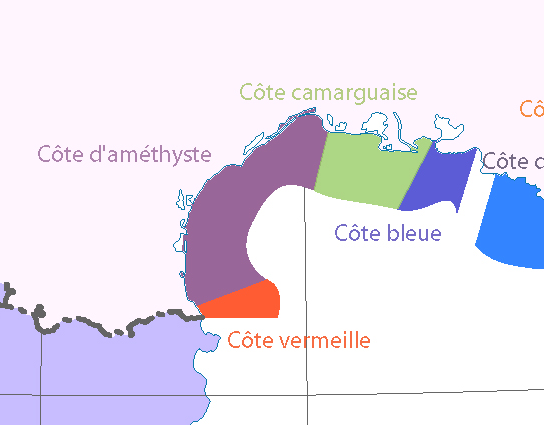