A post-sunset swimmer at Moonlight Beach in Encinitas, Calif., this month.
(Mike Blake/Reuters)

From WashingtonPost by Chris Mooney and Brady Dennis

The findings mean the world might have less time to curb carbon emissions.

The world’s oceans have been soaking up far more excess heat in recent decades than scientists realized, suggesting that Earth could be set to warm even faster than predicted in the years ahead, according to new research published Wednesday.

Over the past quarter-century, Earth’s oceans have retained 60 percent more heat each year than scientists previously had thought, said Laure Resplandy, a geoscientist at Princeton University who led the startling study published Wednesday in the journal Nature.
The difference represents an enormous amount of additional energy, originating from the sun and trapped by Earth’s atmosphere — the yearly amount representing more than eight times the world’s annual energy consumption.

In the scientific realm, the new findings help resolve long-running doubts about the rate of the warming of the oceans before 2007, when reliable measurements from devices called “Argo floats” were put to use worldwide.
Before that, differing types of temperature records — and an overall lack of them — contributed to murkiness about how quickly the oceans were heating up.

“We thought that we got away with not a lot of warming in both the ocean and the atmosphere for the amount of CO2 that we emitted,” said Resplandy, who published the work with experts from the Scripps Institution of Oceanography and several other institutions in the United States, China, France and Germany.
“But we were wrong. The planet warmed more than we thought. It was hidden from us just because we didn’t sample it right. But it was there. It was in the ocean already.”


The United Nations panel on climate issued a report warning of unprecedented temperature rise between 2030 and 2052 if global warming continues.
(Reuters)

Wednesday’s study also could have important policy implications.
If ocean temperatures are rising more rapidly than previously calculated, that could leave nations even less time to dramatically cut the world’s emissions of carbon dioxide, in the hope of limiting global warming to the ambitious goal of 1.5 degrees Celsius (2.7 degrees Fahrenheit) above preindustrial levels by the end of this century.

The world already has warmed one degree Celsius (1.8 degrees Fahrenheit) since the late 19th century.
Scientists backed by the United Nations reported this month that with warming projected to steadily increase, the world faces a daunting challenge in trying to limit that warming to only another half-degree Celsius.
The group found that it would take “unprecedented” action by leaders across the globe over the coming decade to even have a shot at that goal.

Meanwhile, the Trump administration has continued to roll back regulations aimed at reducing carbon emissions from vehicles, coal plants and other sources and has said it intends to withdraw from the Paris climate accord.
In one instance, the administration relied on an assumption that the planet will warm a disastrous seven degrees Fahrenheit, or about four degrees Celsius, by the end of the century in arguing that a proposal to ease vehicle fuel-efficiency standards would have only minor climate impacts. 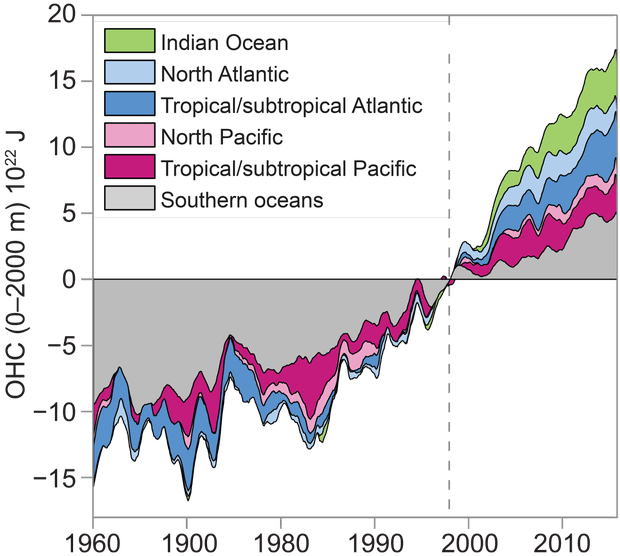 The new research underscores the potential consequences of global inaction.
Rapidly warming oceans mean that seas will rise faster and that more heat will be delivered to critical locations that already are facing the effects of a warming climate, such as coral reefs in the tropics and the ice sheets of Greenland and Antarctica.

“In case the larger estimate of ocean heat uptake turns out to be true, adaptation to — and mitigation of — our changing climate would become more urgent,” said Pieter Tans, who is the leader of the Carbon Cycle Greenhouse Gases Group at the National Oceanic and Atmospheric Administration and was not involved in the study.

The oceans absorb more than 90 percent of the excess energy trapped within the world’s atmosphere.

The new research does not measure the ocean’s temperature directly.
Rather, it measures the volume of gases, specifically oxygen and carbon dioxide, that have escaped the ocean in recent decades and headed into the atmosphere as it heats up.
The method offered scientists a reliable indicator of ocean temperature change because it reflects a fundamental behavior of a liquid when heated.

“When the ocean warms, it loses some gas to the atmosphere,” Resplandy said.
“That’s an analogy that I make all the time: If you leave your Coke in the sun, it will lose the gas.”

This approach allowed researchers to recheck the contested history of ocean temperatures in a different and novel way.
In doing so, they came up with a higher number for how much warming the oceans have experienced over time.

Quantification of ocean heat uptake from changes in atmospheric O

“I feel like this is a triumph of Earth-system science.
That we could get confirmation from atmospheric gases of ocean heat content is extraordinary,” said Joellen Russell, a professor and oceanographer at the University of Arizona.
“You’ve got the A team here on this paper.”

But Russell said the findings are hardly as uplifting.

The report “does have implications for climate sensitivity, meaning, how warm does a certain amount of CO2 make us?” Russell said, adding that the world could have a smaller “carbon budget” than once thought.
That budget refers to the amount of carbon dioxide humans can emit while still being able to keep warming below dangerous levels.

The scientists calculated that because of the increased heat already stored in the ocean, the maximum emissions that the world can produce while still avoiding a warming of two degrees Celsius (3.6 Fahrenheit) would have to be reduced by 25 percent.
That represents a very significant shrinkage of an already very narrow carbon “budget.”

The U.N. panel of climate scientists said recently that global carbon emissions must be cut in half by 2030 if the world hopes to remain beneath 1.5 Celsius of warming.
But Resplandy said that the evidence of faster-warming oceans “shifts the probability, making it harder to stay below the 1.5-degree temperature target."

Understanding what is happening with Earth’s oceans is critical, because they, far more than the atmosphere, are the mirror of ongoing climate change.

According to a major climate report released last year by the U.S. government, the world’s oceans have absorbed about 93 percent of the excess heat caused by greenhouse gases since the mid-20th century.
Scientists have found that ocean heat has increased at all depths since the 1960s, while surface waters also have warmed.
The federal climate report projected a global increase in average sea surface temperatures of as much as nearly five degrees Fahrenheit by 2100 if emissions continue unabated, with even higher levels of warming in some U.S. coastal regions. 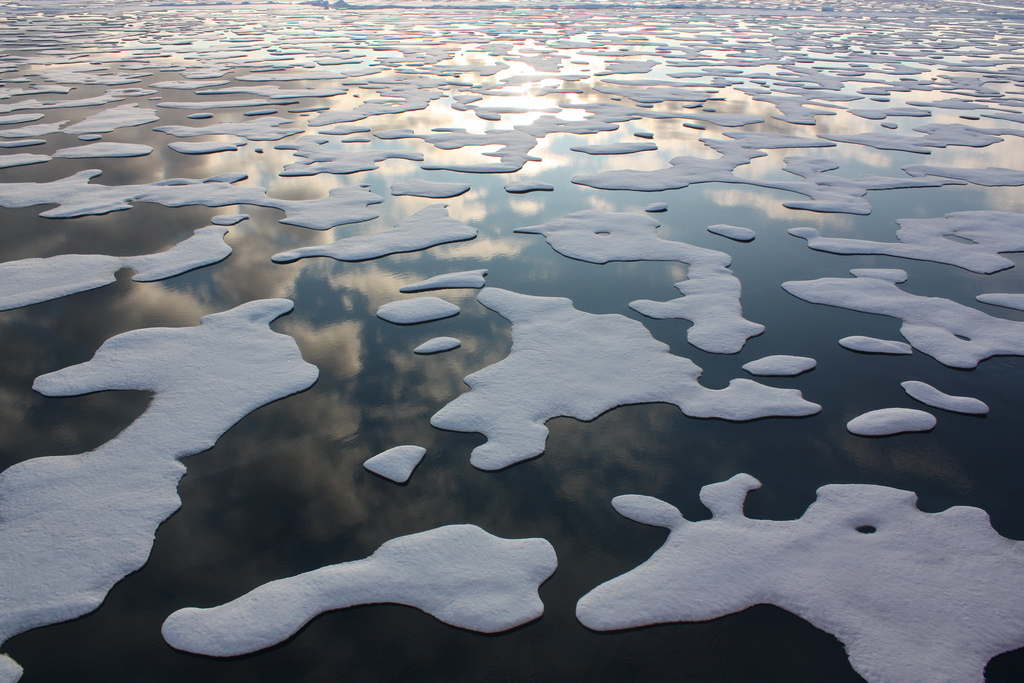 The world’s oceans also absorb more than a quarter of the carbon dioxide emitted annually from human activities — an effect making them more acidic and threatening fragile ecosystems, federal researchers say.
“The rate of acidification is unparalleled in at least the past 66 million years,” the government climate report stated.

Paul Durack, a research scientist at the Lawrence Livermore National Laboratory in California, said Wednesday’s study offers “a really interesting new insight” and is “quite alarming.”

The warming found in the study is “more than twice the rates of long-term warming estimates from the 1960s and ’70s to the present,” Durack said, adding that if these rates are validated by further studies, “it means the rate of warming and the sensitivity of the Earth’s system to greenhouse gases is at the upper end.”
He said that if scientists have underestimated the amount of heat taken up by the oceans, “it will mean we need to go back to the drawing board” on the aggressiveness of mitigation actions the world needs to take promptly to limit future warming.

Beyond the long-term implications of warmer oceans, Russell added that in the short term, even small changes in ocean temperatures can affect weather in specific places.
For instance, scientists have said warmer oceans off the coast of New England have contributed to more-intense winter storms.

“We’re only just now discovering how important ocean warming is to our daily lives, to our daily weather,” she said.