A sea change: how one small island showed us how to save our oceans 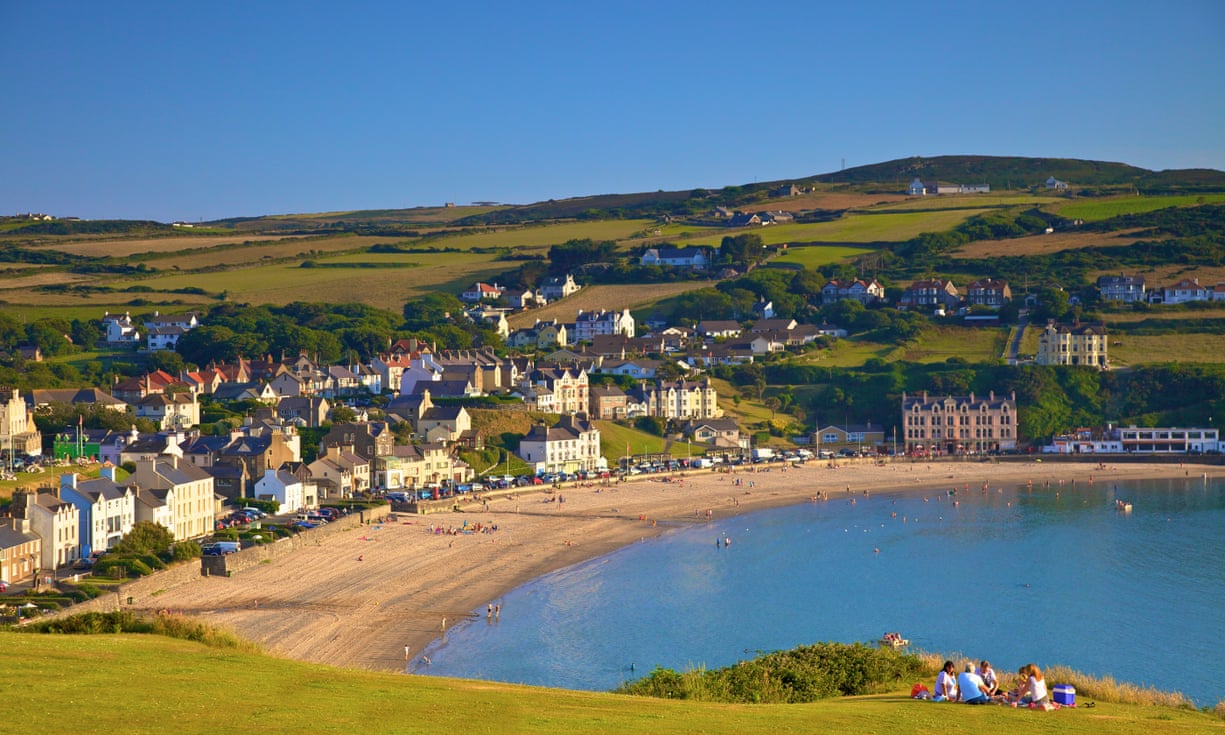 In just 10 years, the Isle of Man has rid its beaches of plastic and earned Unesco status as a world leader in ocean protection.
So how did it do it?

Standing on a windswept beach on the north-west coast of the Isle of Man, Bill Dale looked out on to plastic bottles, cartons and packaging forming a thick carpet covering the shingle.
It was 2007, the global plastic binge was already well under way, but the millions of tonnes of waste seeping into the oceans as a consequence had not reached the public consciousness.
“I was with a friend and we thought, ‘Let’s just clean up this one beach.’
We had no idea then of the scale of the problem.”

It took six weekends, working long hours, to collect all the plastic litter.
“We shifted 30,000 plastic bottles and large pieces of plastic,” said Dale.
“You would pick one piece up, and underneath was another and another in layers.
Some of the stuff went back 20 years.” 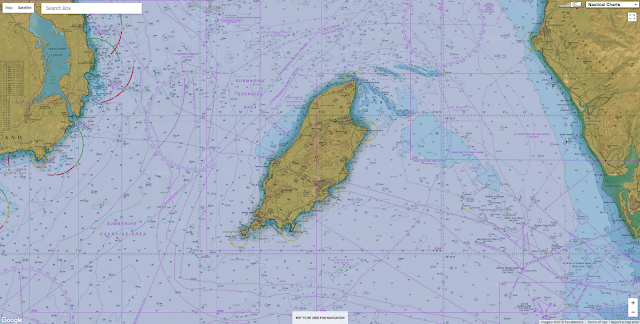 Isle of Man with the GeoGarage platform (UKHO chart)

Today, as Dale stands outside an Edwardian summerhouse in the west of the island at Niarbyl bay, he believes Manx beaches are the cleanest in Europe.
But the regular sweeps of the 100-mile coastline, conducted by his charity Beach Buddies, are just one facet of the island’s approach to ocean protection that makes it a global leader.

In the charity’s visitors’ book, alongside comments from schoolchildren, teachers and parents, there is a signature that stands out: that of Dr Han Qunli, a senior figure within the United Nations Educational, Scientific and Cultural Organisation (Unesco).
It was after his visit that the Isle of Man joined the likes of Mauritius, Menorca, Jeju in South Korea and Noosa in Australia in being singled out for a commitment to protecting and enhancing the coastal environment and biodiversity. 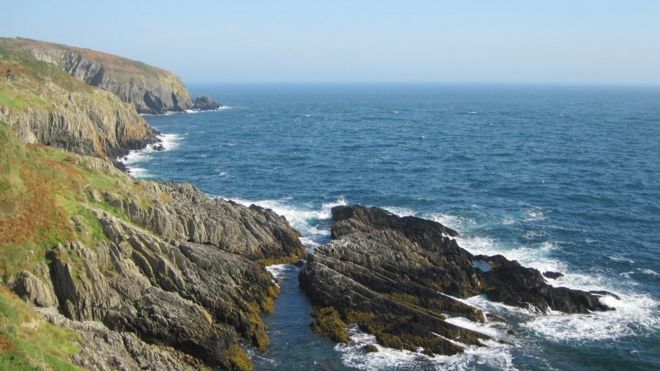 The island’s determination to protect the coastal environment from the multiple threats of plastic pollution, climate change and overfishing has earned it the status of a Unesco biosphere region, designated because it is an outstanding example of a place where people and nature work in harmony.
It is the only entire island jurisdiction to be granted the status.

One indication of the islanders’ commitment to a better marine environment is the numbers that turn out for Beach Buddies.
It has attracted 10,000 volunteers over the years – 12% of the Manx population.
Dale said: “We have kids who come with their schools to do a beach clean, then tell their parents: ‘Dad, I want to go and do a beach clean on Saturday,’ and they bring their parents here.
These beaches are virtually self-cleaning now.”

For marine biologist Dr Fiona Gell, who grew up on the Isle of Man, the grim reality of what is happening to the world’s oceans is all too familiar.
She has spent her life studying the damage being done to the sea’s flora and fauna, and has seen first-hand the devastation that means just 13% of the world’s oceans are untouched by the impact of humanity’s footprint.

Now a marine scientist at the Department for Environment, Food and Agriculture in the Isle of Man government, she heralds the steps being taken on the island as proof that all is not entirely lost.

In 2011, there were just two protected marine areas in the seas off the island.
But in the past seven years Gell and her team have been instrumental in throwing a protective ring around the island, increasing the number of marine protected areas to 10, which cover 50% of the inshore waters.
From the Calf of Man, a tiny island off the south coast where seals sunbathe on the rocks and basking sharks swim in the summer, to Ramsey Bay in the north, these marine nature reserves restrict trawling and dredging by fishermen and other damaging activities, in order to protect sealife habitats.

Looking out over Ramsey Bay, which in 2011 became a marine nature reserve covering 94 sq km, Gell points out the location of seagrass beds, horse mussel reefs and maerl beds that are once again thriving.
“Seagrass has declined globally in a really scary way, particularly in the UK, since the 1920s,” said Gell.
“It looks like a green meadow under the sea and has a really high level of carbon storage.
It is also really important for juvenile scallops.” 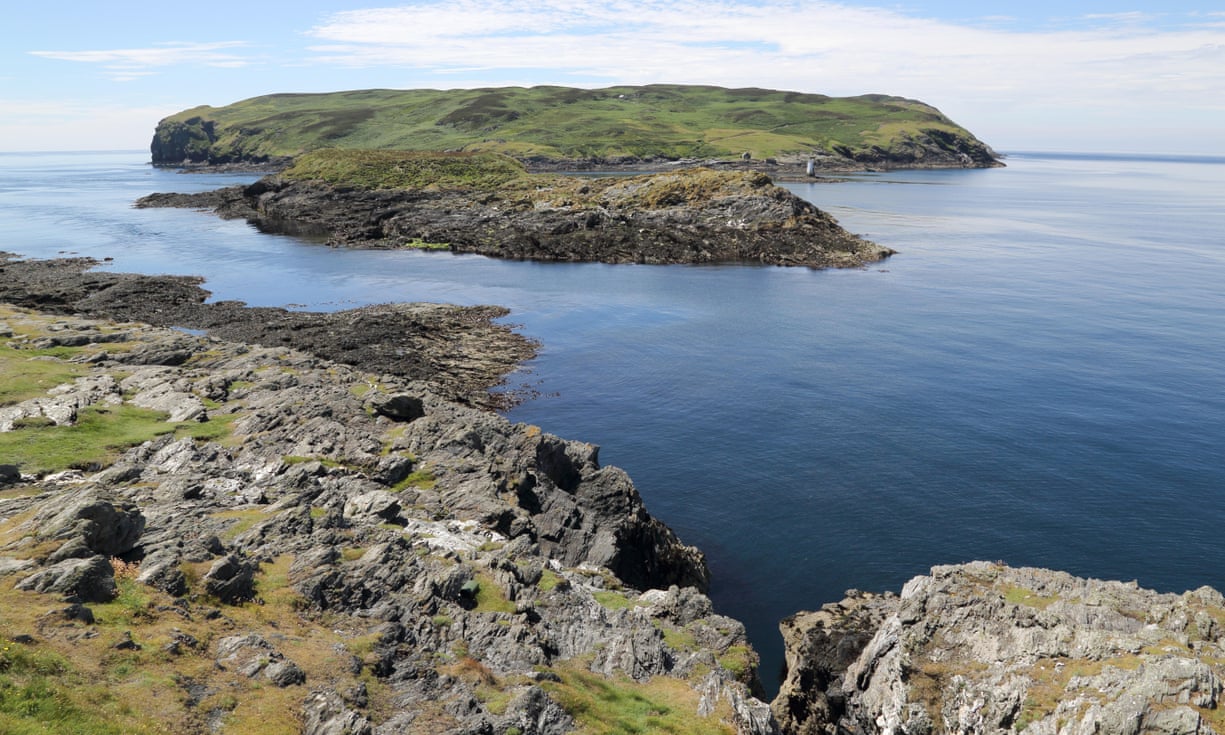 The Calf of Man, a small island on the Isle of Man’s south west coast, where seals sunbathe on the rocks and basking sharks swim. 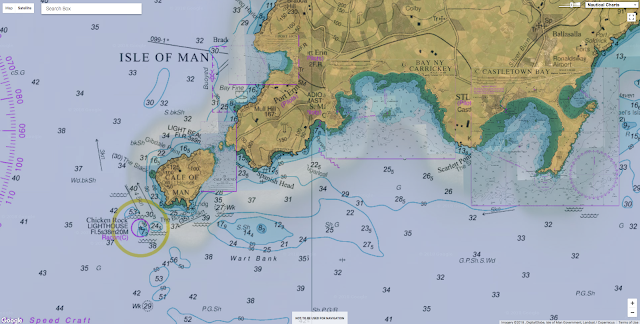 The Calf of Man island with the GeoGarage platform (UKHO chart)

Each marine feature being protected and enhanced by the reserve creates diverse habitats that allow scallops, juvenile cod, lobster and other fish to thrive.
And while in many areas the fishing industry finds itself at loggerheads with environmentalists, fishing businesses on the Isle of Man – which fish for king and queen scallops, brown crab, lobster and whelk – have been involved in drawing up the protective marine belt around the island, even if some had to be heavily persuaded at first of the case for the protection zone.

Dr David Beard, chief executive of the Manx Fish Producers Organisation, is also a marine biologist.
“Back in 2009, Ramsey Bay had been overfished, there was very little stock left in there and the industry volunteered that area to be closed for a period of time,” he said.

“It was an important source of both king and queen scallops from a value point of view and because the whole area supplies the spats [young scallops] to other areas in the Irish sea it affects the recruitment of the other stocks.”

The bay encompasses one of the most restricted fishing areas in the coastal waters, where dredging or trawling for scallops is banned throughout the year, except for two weeks before Christmas when up to 30 boats are allowed to go out.
Each year the fishermen carry out a stock survey, so by the time they are allowed to fish they know the location of the highest quantities of scallops.

“They get the highest value for the least impact,” said Beard.
“It is a very low-carbon action because they know where to go and they are allowed to trawl for 20 minutes maximum, and it means there is less impact on the seabed.
The fishermen know that if they destroy the seabed by overfishing you prevent the spat from settling, so you destroy the fishing, and it is a vicious circle.”

Gell has been instrumental in trying to bring the public and fishing industry along with the conservation efforts.
“We are trying not to impose from the top,” she said.
“Each marine protected area comes from a lot of engagement with the local people.
We go out all over the island to villages and towns and hold stakeholder meetings, with maps to discuss why an area needs to be protected, and to involve people and bring them onboard.
It is a slow process but when I look back to 2008 and see what we have achieved I think it shows that people working together in communities can make a difference.
“We have to stay optimistic. From my experience here over the past 10 years, I think we have shown people can get involved in a real community approach and can make a change.”

Isle of Man firm wins permission to search seabed for gas and oil (see BBC)
The area where surveys will be carried out spans 266 sq km (165 sq mile)
(Block 112/25, also called the "Crogga Field" is the area the company has the licence to search)
image via Crogga

As one of 52 Unesco island and coastal biosphere areas, the Isle of Man is focusing now with partners in Menorca, the Maldives, the Philippines and other islands on eliminating single-use plastic from their shores.

If that eventually puts Bill Dale out of a job, he could not be happier.