Where do we map next?

Mapping the world’s oceans is a tremendous task that would benefit from a prioritisation strategy.
In this article, an in-depth presentation of one such approach is given - a GIS-based analysis that identifies potential target areas for future mapping efforts in the North Atlantic Ocean.
The authors state that more knowledge about the seafloor could be significantly accelerated if all bathymetric data were publically available. 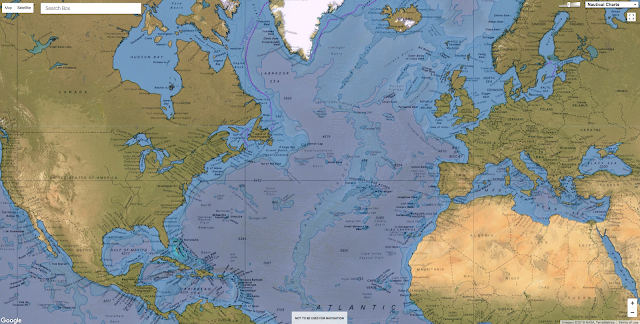 Bathymetry underpins the safe, sustainable and cost-effective execution of almost every human activity that takes place at sea, yet most of the seafloor remains virtually unmapped, unobserved and unexplored.
In fact, less than 15% of the depth of the world’s ocean waters have been measured directly and only about 50% of the world’s coastal waters (waters <200m deep) have ever been surveyed.
Knowledge of the seafloor is a crucial factor in using the oceans, seas and marine resources for sustainable development, and hence attaining the UN Sustainable Development Goal 14.
With so much ocean floor out there that needs to be surveyed, how do we choose where to begin?

A Strategy is Needed

Any mapping of the seafloor is likely to cover ‘terra incognita’.
So, it may not seem particularly important to choose where to go - any mapping will yield new results.
However, as global and regional campaign mapping initiatives (e.g. Seabed 2030) gain momentum, more strategic approaches will be needed to avoid costly duplicative efforts and keep potential mapping-related environmental impacts (e.g. ocean noise) to a minimum.

Furthermore, there are regions within the ocean that are of special interest to a variety of stakeholder groups - prioritizing mapping in these regions may have advantages in terms of the blue economy or developing sustainable ocean management plans.

An Idea is Born

The idea to analyze and identify seafloor mapping areas for future bathymetric surveys in the North Atlantic was initiated by the Atlantic Seabed Mapping International Working Group (ASMIWG), whose aim is to develop and implement a cohesive mapping strategy in the Atlantic Ocean.
This working group was established in association with the 2013 Galway Statement on Atlantic Ocean Cooperation that was signed by Canada, the European Union, and the United States to enhance cooperation and increase knowledge of the Atlantic through better coordination and collaboration in ocean observation efforts.

The working group set out to determine which areas should take priority, based on pre-defined stakeholder parameters, of every 400 x 400km square within the North Atlantic High Seas area, and identify the three areas with both the highest suitability and least amount of previous bathymetric data coverage.
The basic assumption was: the greater the number of stakeholder interest at a certain site, the higher its suitability.
The area size of 400 x 400km was chosen as being mappable within approximately 100 days using modern techniques, equivalent to a single cruise campaign involving three ships, one from each of the major Galway partners.
The North Atlantic study area was defined as lying between 23°N (Tropic of Cancer) and 66°N (Arctic Circle) - excluding both national EEZ and their granted or pending extended continental shelf claims.

The Selection of Parameters

A key step in the analysis was to first determine where bathymetric data already existed.
Perhaps surprisingly, this was not a trivial task as only a small percentage of existing multibeam data and associated geographic information is easily accessible through online portals such as the International Hydrographic Organization Data Centre for Digital Bathymetry, Global Multi-Resolution Topography Synthesis (GMRT) and EMODnet Bathymetry.
To determine the current data coverage in an area, multibeam swaths accessed from these databases were combined and displayed.
Where only ship tracks were available and the swath coverage was unknown, a buffer of 2.5km around the track was used (see figure above).
A single-beam density grid from NOAA, showing the number of soundings per 0.02° cell, was also analyses but not included in the data coverage calculations, due to the lack of significant spatial coverage of single-beam data in areas where multibeam coverage did not already exist.

The working group then identified a set of parameters based on the interests of various stakeholder groups (such as scientists, industry and environmental organizations) that factor in areas of public interest, sensitive marine areas, and areas with marine resource potential.

The following parameters were then included in the analysis:

Map of the study area showing the GIS parameter layers of category I
Environmentally-sensitive Areas (modified after Woelfl et al. (2017)).

The parameters were grouped into three categories:
These parameters reflect the attributes a potential target area could possess to increase its priority for future planned bathymetric surveys.
Which parameter they use depends on the individual stakeholder’s interest.

The target areas were defined using GIS techniques and included parameters of the marine environment as well as available information regarding data coverage.
The GIS analysis was performed with ArcGIS 10.4.
First, the three categories were integrated into the GIS as individual geospatial vector layers (shapefiles) and transformed into raster layers of 1 x 1km cells.
These layers were then combined using an overlay technique and an expression executed to add up the cell values.
The desired outcome of the analysis was to obtain information about the suitability of every cell as a target area by assigning it a suitability value.
Therefore, a value of one or zero was assigned to each cell for every raster layer, depending on the presence or absence of the respective category in the cell.
The result is a map showing the spatial overlap of the three categories.
The absence of all categories in a cell would result in very low suitability, one category occurring results in low suitability, two categories occurring equals medium suitability, and all three categories means high suitability.

Result map showing the suitability of the study area and the three selected target areas
(modified after Woelfl et al. (2017)).

For visualization purposes, the multibeam data coverage was classified into four bands (0-25%, 25-50%, 50-75%, and 75-100% of the area mapped with multibeam data) for each polygon.
The three regions of highest priority singled out by this analysis have not only a high occurrence of desired attributes, reflected in a high suitability class, but also a relatively low multibeam data coverage. 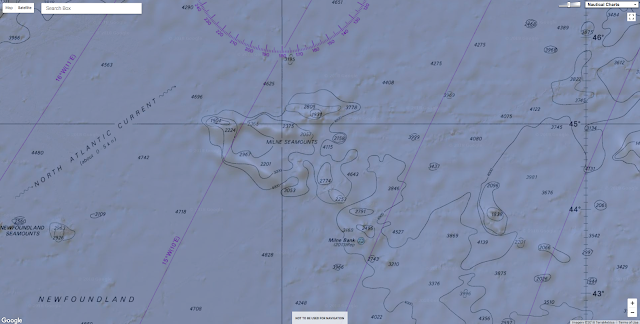 The first target area, in the north of the study region, includes the Milne Seamount located close to the continental slope and reaching abyssal depths of 6000m.
Milne Seamount is part of the Milne Seamount Complex, a Marine Protected Area.
Of this area, 13% was classified as highly suitable, the rest, of medium suitability, with all three categories represented.
Only 13% of this area has been mapped in detail. 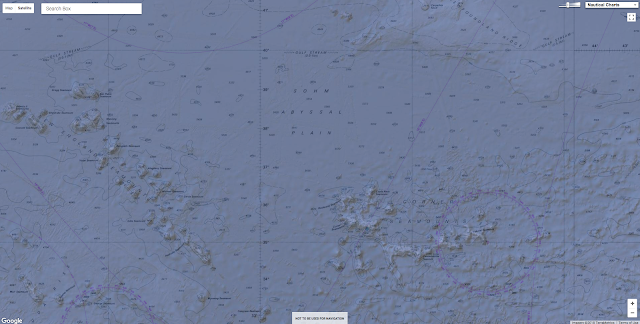 Southwest of the Milne Seamount Complex is the Sohm Plain Area.
With 24% of the area mapped, the seafloor has been characterised as being made up of abyssal plains and hills.
14% of the area is classified as highly suitable with all three categories occurring.
The remaining area shows medium and low suitability classifications.

Directly east of the US coastline and north of the Caribbean is the Sargasso Sea Area.
Almost half of this target area is highly suitable (45%), the other half, medium suitability with the presence of all three categories.
This area is mostly categorised as the abyssal plain although a small area likely reaches below 6000m water depth and into hadal regions and shows 26% data coverage.

Identifying the three target areas using a selection algorithm and a GIS-based overlay technique, is one approach to answering the question “Where do we map next?”.
However, we acknowledge that the interdependencies between some of the selection criteria (e.g.
data coverage density and the designation of Environmentally Sensitive Areas) can lead to the suitability of some areas being underestimated.
For example, many marine protected areas are designated based on knowledge of the seafloor (e.g.
data coverage).
Therefore, all presently unmapped regions warrant further study and may harbour features of particular stakeholder interest.
Changing this situation, and so gaining more knowledge about the seafloor, could be significantly accelerated if all bathymetric data were publically available and accessible to all.

The value of GIS analysis is that it can be easily adjusted and repeated to include new criteria depending on interest, or new data as it becomes available.
It provides an objective way to prioritize mapping areas.
We think that this approach can contribute to filling the large knowledge gaps in our oceans by highlighting unmapped areas and suggesting potential mapping targets.

From Pilot Analysis to Data Collection

On 12 July 2018, the NOAA Ship Okeanos Explorer left Norfolk, VA to conduct a 24 day exploratory mapping expedition in the Sargasso Sea Area.
The objectives of the first US-led mapping effort in support of the Galway Statement on Atlantic Ocean Cooperation were to collect critical baseline information about the unknown and poorly understood deep-water area.
The expedition mapped over 52,000 square kilometres (20,400 square miles), an area almost three times the size of New Jersey, and acquired multibeam bathymetry, backscatter, sub-bottom and water column sonar data.
More information on this expedition can be found on NOAA’s website.
Posted by geogarage at 1:13 AM