These examples are based on the IALA-B buoyage system that is used in the 50 states and the Caribbean.
In the IALA-A system, used in U.S. territories in the South Pacific, the square and triangle top marks shown on V-AIS aids are switched with each other.
Refer to the graphic at Q-130.1 in U.S. Chart No.1 for more information about IALA buoyage regions.

From The Marine Link by Charlie Judice

To recreational boaters, Aids to Navigation (ATON) are the familiar red and green buoys (and day markers) that line our inland waterways.
What they might not be aware of is that buoys have been around since the days of the Roman and Egyptian empires.
In the decades following the creation of our country, buoys in every shape and color began appearing in our waterways.
It wasn’t until 1850 that Congress harmonized their deployment, thereby encouraging the familiar “Red, Right, Returning” mantra.
Fast forwarding to the 21st century, in response to the terrorist attack in 2001, Congress authorized the USCG to develop a Nationwide Automated Identification System (NAIS) which is now operational in 69 major U.S. ports and waterways.
NAIS enabled a sophisticated, mobile digital network for ship-to-ship, ship-to-shore, and ship-to-ATON communications.
This network proved its worth in the aftermath of hurricanes Harvey, Mathew, and Irma when virtual ATON were energized long before physical ATON could be strategically positioned. 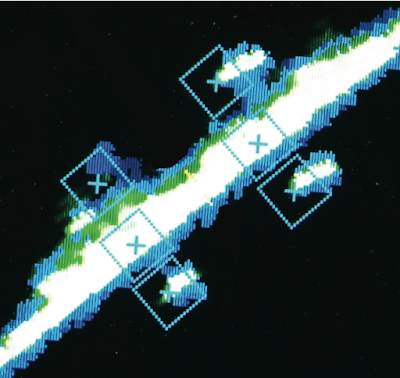 The USCG’s role in these advancements would not have been possible without the dedicated professionals in their Research and Development Center (RDC) in New London.
In my 40 years in the non-governmental R&D business I have never been more impressed by the breadth of technologies and focus on the customer as I have learned more and more about the USCG RDC.
Founded in 1972, the USCG RDC has had a broad mission with respect to improving the safety and security of our waterways.
From researching ecologically sensitive cables for anchoring buoys to the ocean floor to developing upper layer communication protocols for the existing Automated Identification System (AIS) Application Specific Message (ASM) set, RDC leverages its small workforce by cooperating with partners and engaging with relevant international standards associations. 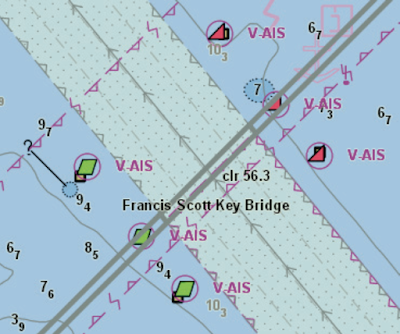 Non-AIS Enabled ECDIS Display of ENC
Note: On an AIS enabled ECDIS, the blue diamond target symbols seen in the image above would be displayed on top of the V-AIS AtoN symbols shown at left. 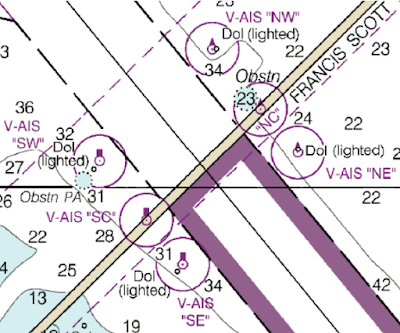 Paper Chart 12281 and ECS Display of Raster Nautical Chart
Note: This image and the EDCIS image above both show that the shore based AIS station is broadcasting the position of each of the outter virtual AIS AtoNs on top of (or nearby) the positions of each of the four lighted dolphins.

From the early days of RDC, projects were selected to help the Coast Guard perform its’ mission with respect to buoy placement.
Along with Aids to Navigation Information System (ATONIS) software, Differential Loran-C was developed and demonstrated as a positioning aid for setting buoys.
Eventually these techniques were superseded by digital GPS.
Over the years, also RDC did significant work regarding power and lighting capabilities, which are so vital for night time navigation.
Even before there was AIS, RDC was working hard on improving accuracy, reducing the cost of setting, maintaining, and managing the vast collection of buoys in U.S.
waterways.
These efforts served as a foundation for the center’s engagement in e-navigation.

The notion of e-Navigation, as defined by the International Maritime Organization (IMO), is only about a decade old, yet much progress is being made.
The Committee on the Marine Transportation System (CMTS) is using the eNAV definition to develop its strategy for eNAV advancements in the U.S.
Their goal is: “the harmonized collection, integration, exchange, presentation and analysis of maritime information onboard and ashore by electronic means to enhance berth to berth navigation and related services, for safety and security at sea and protection of the marine environment”.
RDC developed AIS architectures that are in alignment with those International Standards.
To be more specific about one aspect of design, the RDC followed the International Telecommunications Union (ITU) recommendation: [To those unfamiliar with AIS, here is a simple primer.
AIS is a data transmission system that uses VHF Channels 87 and 88 to transmit and receive data.
These two channels are broken into 2,250 time slots where data is placed either by the ship or a shore station.
Time slots are synchronized locally using the GPS timing function.
A ship reserves a time slot using a protocol called self-organizing (time division multiple accessTDMA which is very efficient and reliable. Originally AIS was designed to send or receive only 22 messages related to the ship’s identity, speed, direction, and other factors.
With the development of ASM, the sky (or earth’s surface) is the limit.
In the U.S., numerous ASM have been tested.
One such message is an environmental message that provides information on wind, tides, water levels, current, sea state, and other meteorological and hydrological data.
Another is a waterways management message containing information that could be used for drawbridge and lock operations.
A third ASM is a geographic notice that can define an area and provide information on precautions to be exercised in that area.
Additional ASM are in draft form or currently being tested.] AIS is chosen for its cost effectiveness and because the flexibility of the system not only allows for the marking of buoys sending light status information but also for the ability to integrate meteorological and hydrological monitoring in addition to the transmission of important lock and bridge status information.
courtesy of SRT Marine

RDC’s work in this area has been far ranging.
For example, a few years ago the RDC collaborated with the U.S. Army Corps of Engineers (USACE) to utilize the NAIS message set, routers, and servers to enable USACE to develop improved systems -- compatible with NAIS -- to enhance the safety and efficiency of operating inland locks.
Several standard ASMs were defined and methods have been developed for message creation, routing, queuing, transmission and monitoring.
Today, an AIS transmit architecture aligned with International standards has been developed to implement the efficient and robust transmission of these specific ASMs. 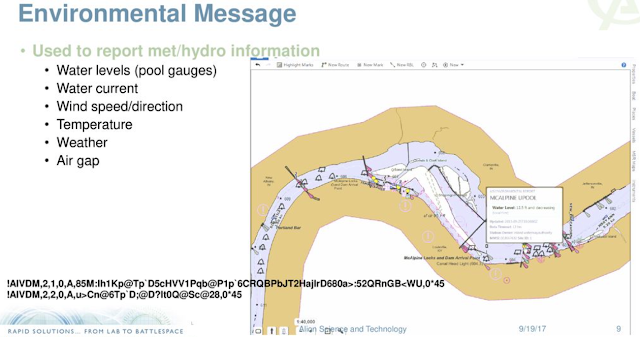 It is estimated that our nation’s waterways enable over $4.6 trillion worth of economic activity at 360 plus ports.
The Coast Guard has statutory responsibility to operate and maintain a system of maritime aids to facilitate navigation and to prevent disasters, collisions, and wrecks.
To fulfill this mission, the Coast Guard operates over 53,000 aids throughout the United States, Hawaii, Alaska and other US locations such as Guam and Puerto Rico.
However, this is not where the story ends.
Today, recreational boaters can download a few smartphone apps to: identify and contact nearby vessels; alert the USCG of deficient ATON, navigational hazards, and environmental pollution; and, most importantly, navigate more safely and with greater security.

As the software tools of e-Navigation become widely disseminated and third-party developers are able to build on the connectivity of NAIS assets, we will see significant advances in the role digital technologies play within the Maritime Transportation System
Consider the following scenario: You are sailing out of the Mayport, FL, Inlet and didn’t realize that a 30,000-ton car carrier is creeping up on your stern at 7 knots.
Your radar picked this up but you were too busy preparing to enter the sea.
Fortunately, your son was down below playing Fortnight on his iPhone when he got alerted to the impending disaster.
He tells dad and a catastrophe is averted.
This is possible today because of the flexibility and standardization of the NAIS High-Level Data Link Control (HDLC) ASM messaging packets and the reliability and universality of its network infrastructure.
Such an incident actually happened to a friend of mine (without the help of advanced AIS).

The collection of e-ATON, virtual ATON, Automatic Identification System/Application Specific Messages (AIS-ASM), Search and Rescue Transponder (SART), Satellite AIS (S-AIS) and more gives government, commercial, and private developers the tools to create new and exciting ways of improving vessel transport safety, security, efficiency, comfort, and enjoyment.
The situation today is not unlike the power that was unleashed in the computer industry when open source and interoperability was more than a goal but a reality.
This semester I will be encouraging my middle school STEM class to look for ways of allowing paddle boarders to advantageously use the AIS network.
The USCG RDC continues to lead the way in not just predicting the future but making it happen.