The Mysterious Belize Great Blue Hole is a large underwater hole off the coast of Belize.
It lies near the center of Lighthouse Reef, a small atoll 100 kilometers (62 mi) from the mainland and Belize City.
The hole is perfectly circular in shape, over 300 meters (1000 ft) across (diameter), 3140 feet circumference and 125 meters (410 ft) deep.
It was formed as a limestone cave system during the last glacial period when the sea level was 400 to 500 feet below present time and was dry land.
Last glacial period began about 120,000 years ago and end about 15,000 years ago.
Reaching the maximum extension 26,500 years ago.
At the end the ocean began to rise, the caves flooded, and the roof collapsed. 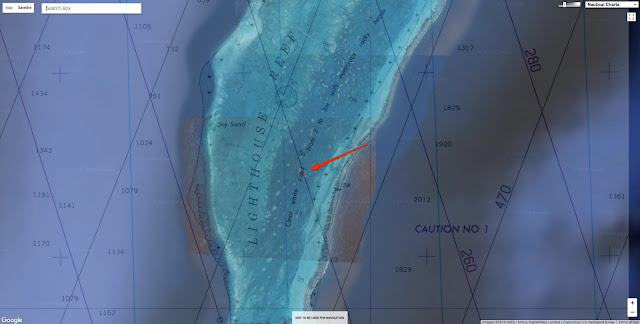 Blue Hole in Belize with the GeoGarage platform (NGA chart)

From 9News by Mark Saunokonoko

Situated 70km off the Belize coast, the giant Blue Hole is one of the world's leading scuba dive spots, and the UNESCO site is believed to hold clues to the mystery of how the Mayan civilisation collapsed between 800 and 1000 AD.

The bottom of the Blue Hole, which measures 124 metres deep, has been reached by divers before. But the environment, enveloped in total darkness, is inhospitable and divers are unable to linger for long periods.

It is hoped that powerful lighting and sonar rigged to a number of agile three-man submarines will expose the immense space which formed hundreds of thousands of years ago during the last Ice Age.

Expedition leader Harvey Flemming says the large team, which includes Branson and Fabien Cousteau, grandson of famed ocean explorer Jacques, don't really know what they will find.
"It's a wildcard … I'm excited to get there and jump in and see what it is all about," Flemming tells nine.com.au from the Aquatica submarine base in Vancouver, Canada.

Flemming says his submarines will be armed with sonar so strong it will be possible to detect if a coin on the hole's floor is facing heads or tails, from 15 metres away and in the dark.

When the mission is complete high-resolution maps will be rendered from the sonar scans, giving scientists and oceanographers an extremely precise, never-before-seen understanding of the hole and its cave system.
"We're really excited to see what we'll see. We don't really know for sure. Maybe a body, who knows? It is totally open for discovery."

Geologists on the team will gather evidence in an attempt to better understand the effect of climate change over the last 100,000 years.
The role of climate change in the development and demise of the classic Maya civilisation has long been debated and studied by researchers.

Potentially significant rock formations and tiny imperfections on cave walls deep inside the hole, which will be made clearly visible by sonar, could add further weight to theories drought triggered the collapse of the Mayans.

What is certain is Flemming's submarines will come across huge stalactites, dripstone sheets and columns inside the blue hole.
Geologists believe these structures formed when sea levels were much lower.
There is no oxygen at all in the water in the farthest reaches of the hole, so marine life is sparse in the anoxic and black conditions.

Flemming says his team will probably make two dives each day over a fortnight period, allowing them to methodically build out the resolution and complexity of the sonar map.
Branson, a known intrepid explorer with an interest in air and space travel, will pilot some of the submarine dives, Flemming says.


Ramon Llaneza diving rebreather explore stargate the entrance to alien underworld in Belize and Bahamas.
Watch more details about this exploration at https://youtu.be/mh49kkENw_Q .
Believed to be the world's largest feature of its kind, the Great Blue Hole is part of the larger Belize Barrier Reef Reserve System, a World Heritage site of the United Nations Educational, Scientific and Cultural Organization (UNESCO).
The hole itself is the opening to a system of caves and passageway that penetrate this undersea mountain.
In various places, massive limestone stalactites hang down from what was once the ceiling of air-filled caves thousand of years before the end of the last Ice Age 15,000 years ago.
When the ice melted the sea level rose, flooding the caves.
This process occurred in stages.
Evidence for this are the shelves and ledges, carved into the limestone by the sea, which run the complete interior circumference of the Blue Hole at various depths.
The Blue Hole is a "karst- eroded sinkhole."
It was once a cave at the center of an underground tunnel complex whose ceiling collapsed.
Some of the tunnels are thought to be linked right through to the mainland, though this has never been conclusively proved.

Notable are the large population of sharks such as lemon, black tip, reef, hammerhead, and bull sharks. Mysterious and legends always have been around the Belize Blue Hole.
This was the entrance to Xibalba?.
It's the kind of underwater geology that inspires speculation about aliens creating geometrically perfect anomalies, mermaids and monsters living in darkness.
I explored the bottom of the Blue Hole perimeter (3,140 feet circumference).
To do this I dove down twice, reaching the depth of 375' feet which took 4 to 5 hours of diving each day.

Scuba divers will drop lines and various items of equipment into the hole.
A documentary crew will film the expedition, which will be live streamed to a global online audience.

The deeper divers go, the danger increases.
Divers can be hit with nitrogen narcosis below 30 metres, a phenomenon where one’s decision making is severely impaired.
Also known as the “martini effect”, fatalities can occur as divers are overcome by symptoms of dizziness, euphoria and panic.
"There are typical risks associated with any marine operation,” Flemming says.
"But we will bring the necessary equipment and rescue vehicles to circumvent that."

The Stingray SR500 model submarines, manufactured by Flemming's company, Aquatica, are fitted out with a 96-hour life support system, in case anything should go wrong.
Entanglement poses one of the biggest dangers to the submarines.


Flemming says the expedition, which last month was sanctioned by the Belize government, is likely to begin before Christmas.