As the moon rises on Friday, July 27th in 2018 you will begin to see the process by which the moon hides beneath the Earth's shadow, what we call a lunar eclipse.

What Is A Lunar Eclipse And How Is It Different From A Solar Eclipse?

You may have heard the terms lunar and solar eclipse used previously and not known exactly what it refers to beyond the general darkening of either the moon or sun.
In both instances what we're seeing on Earth is a shadow draped over the body. 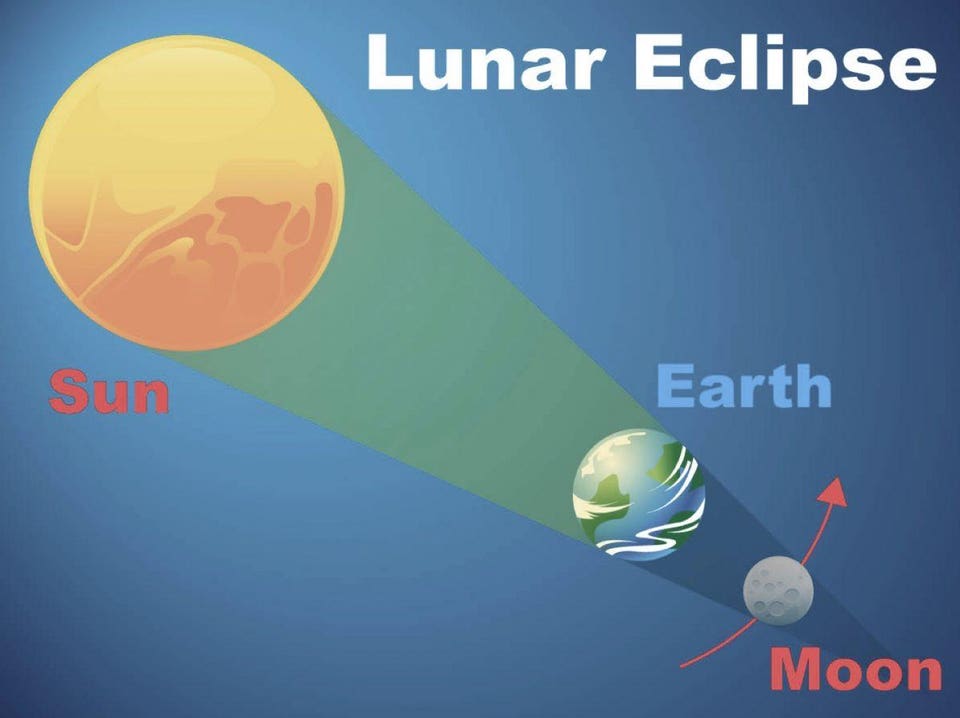 Diagram of a lunar eclipse
NASA

In the diagram above you'll see the arrangement of the sun, Earth, and moon during a lunar eclipse.
In this special arrangement, all three bodies are aligned in a straight line.
However, the alignment is sun > Earth > moon.
The sun is shining brightly on the Earth, but the moon has crept exactly behind the Earth to be in its shadow.
This means there is no direct sunlight reaching the moon, bouncing off the moon, and traveling down to Earth (the typical process that lights up the moon in our night skies).

Detail of diagrams of solar and lunar eclipses from 1431 to 1462.
Image taken from f. 8 of Physician's folding almanac, including John Somer's 'Calendar'
British Library

In comparison, below is a diagram of a solar eclipse.
In this instance, the bodies are all aligned similar to a lunar eclipse but there's one slight difference: the position of the Earth and moon are swapped.
This means the sun is shining brightly on the moon, but part of the Earth lies in the shadow of the moon, not receiving direct sunlight.
During this celestial event we see for a brief period the sun darkened by the shadow of the moon as we are in exact alignment sun > moon > Earth. 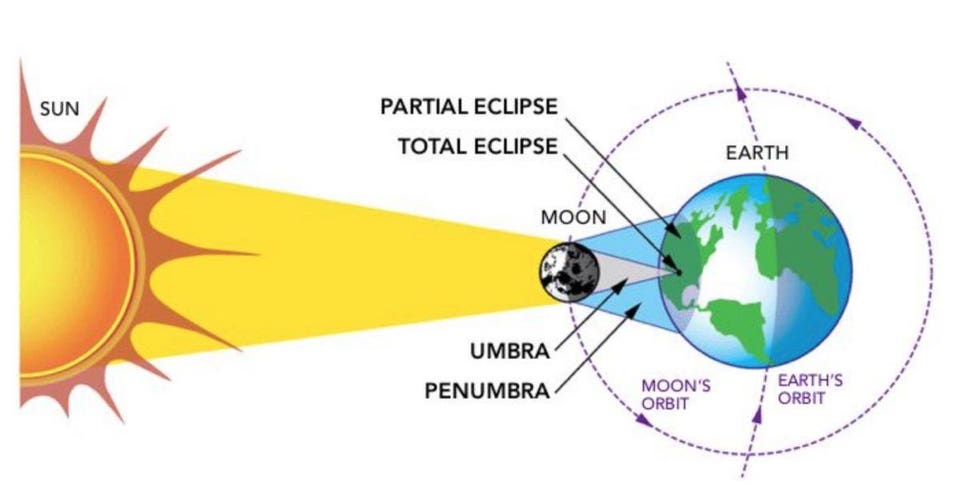 The correct demonstration of the Sun creating a shadow of the moon on Earth.
NASA

How Special Is This Week's Lunar Eclipse?

While we typically experience anywhere between one and four lunar eclipses per year, it is exceptionally rare to have such a long total lunar eclipse and during the month of July.

This Friday's total lunar eclipse means two things are taking place: The bodies are aligned in a straight line in the order of sun, Earth, and moon and at the same time there is a full moon.
A partial eclipse can be when the three bodies aren't fully aligned or if the moon isn't full at that point in time.

Another unique factor about the total lunar eclipse is that the Earth is close to the farthest it will be from the Sun, called the Aphelion.
The table below from timeanddate.com shows the aphelion occurred on July 6th, 2018.

The reason this lunar eclipse is the longest of the 21st century is because it passes through the center of Earth's shadow, increasing the time in which the moon is blocked from the sun.
The theoretical limit of a lunar eclipse is 1 hour and 47 minutes, which we will be just shy of at 1 hour and 43 minutes.

How Do I Track The Total Lunar Eclipse - When Is the Best Time To Watch It?

You're likely wondering when would be ideal to watch the total lunar eclipse and to get a sense of the trajectory of the eclipse on July 27th.
Timeanddate.com has a great way to track the lunar eclipse, you just enter in your location and it will populate everything you need to know about the moon's trajectory, timing, etc. 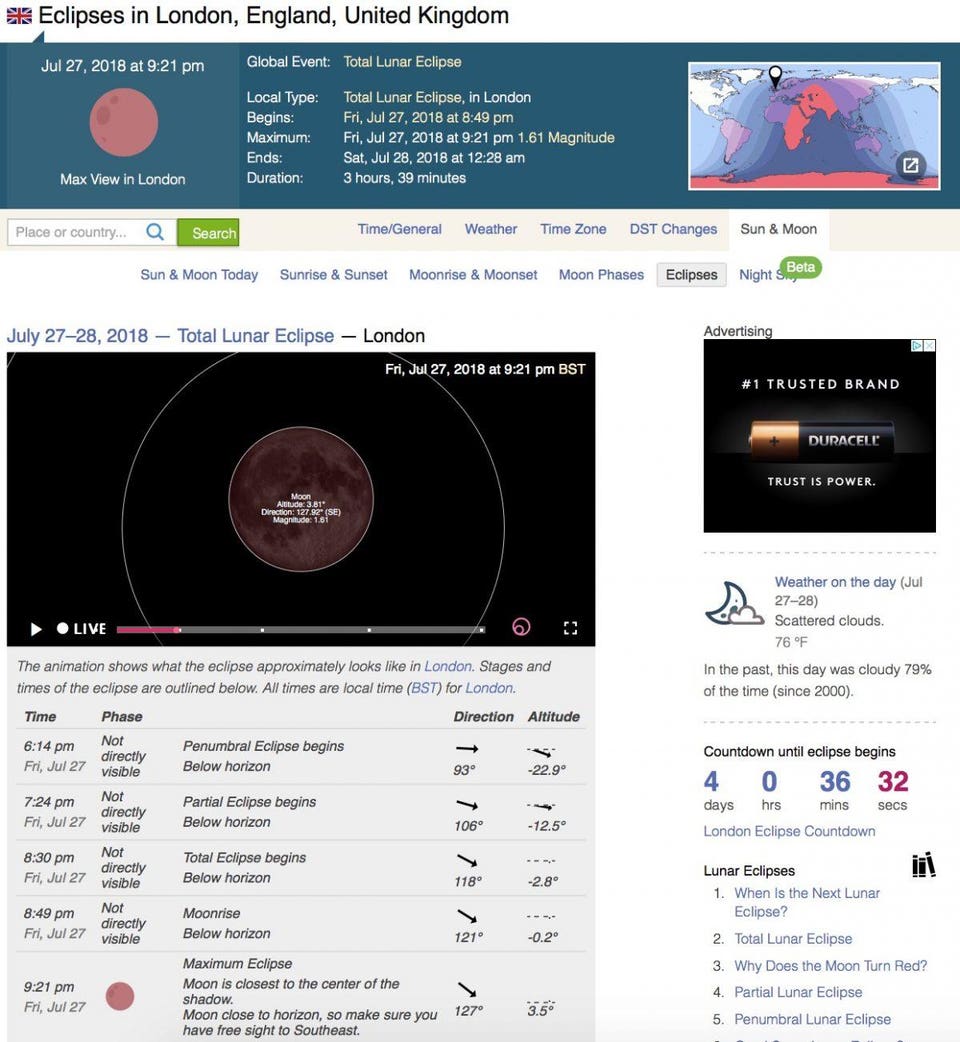 Screenshot of the July 2018 lunar eclipse path through London, England.
www.timeanddate.com
What Is A Blood Moon?

The lunar eclipse will also be a blood moon, which is a term for when the moon glows a deep red color.
The reason for this is due to sunlight scattering.
Since during an eclipse there is no direct sunlight hitting the moon, all of the light which reaches the moon and bounces back to Earth (allowing us to see the moon) is indirect.
The indirect light goes through Rayleigh scattering as it passes through Earth's atmosphere.
This, in effect, scatters the longer blue and violet wavelengths more than the shorter red and orange wavelengths.
Hence, more red/orange wavelength light reaches the moon and is bounced back to Earth, presenting to us a deep red blood moon.

The best part about lunar eclipses is that you don't need any special equipment or glasses as there's no blindingly bright sun to look at.
Simply step outside and look up toward the moon this July 27th summer night and witness the beautiful deep red glow of the blood moon lunar eclipse.