Vessel tracking exposes the dark side of trading at sea 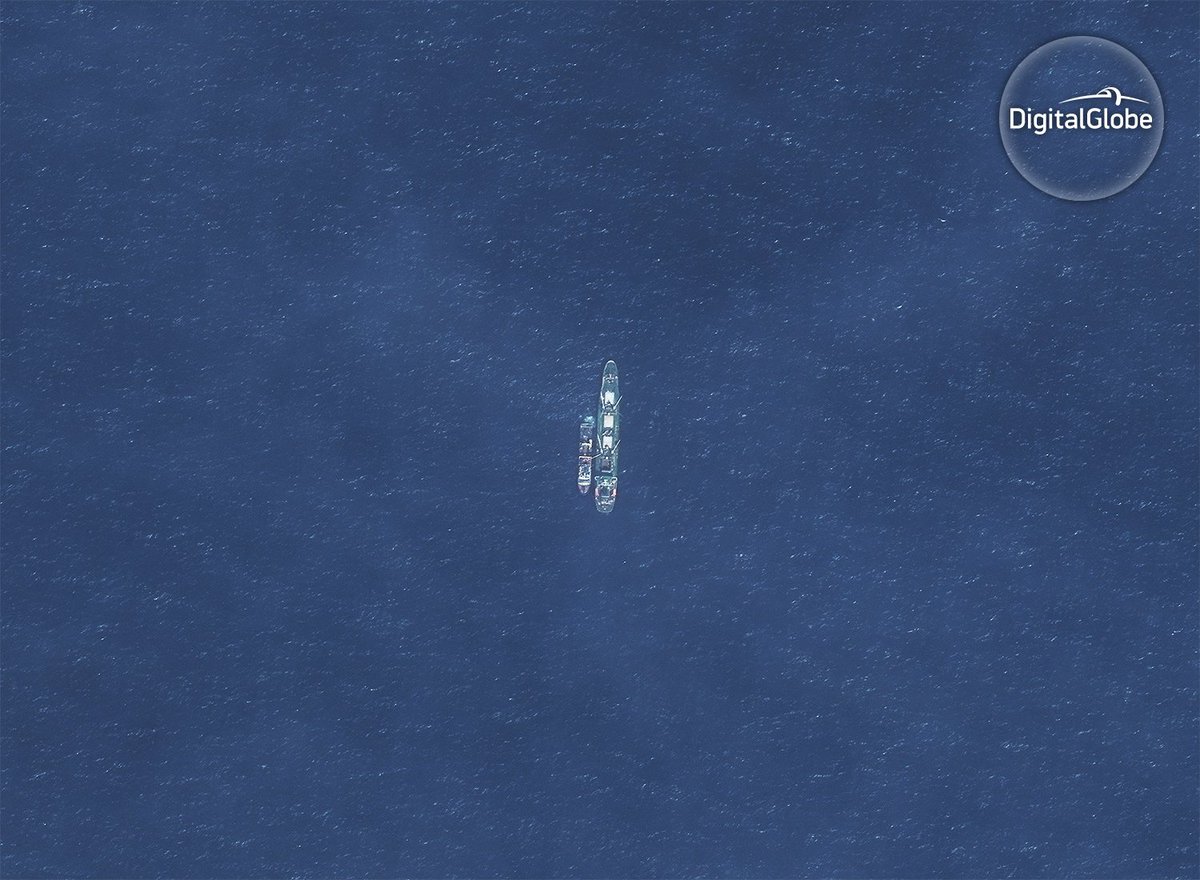 “Some human rights abuses have been associated with transshipment.
By allowing fishing vessels to remain at sea for months or even years at a time, captains are able to keep their crew at sea indefinitely, resulting in de facto slavery”

First ever large-scale analysis of fishing vessel interactions exposes the potential extent of the unmanaged exchange of goods at sea, raising global concerns over illegal fishing and human rights abuses.
The study, published in Frontiers in Marine Science, brings transparency to trading at sea.
It provides the first ever public view of the extent to which these exchanges could be occurring and exposes the need for a global collaboration to improve fisheries management.

"The practice of transshipment -- refrigerated cargo vessels meeting with fishing boats at sea to exchange seafood, crew, fuel or supplies -- is common in many fisheries as it enables fishing vessels to remain at sea while their catch is taken to market," says Dr Nathan Miller of SkyTruth, USA, who led the study.
"However, it lacks uniform regulation and transparent data. This hinders sustainable fisheries management as it makes it very difficult to monitor the amount of marine life being taken from the sea." 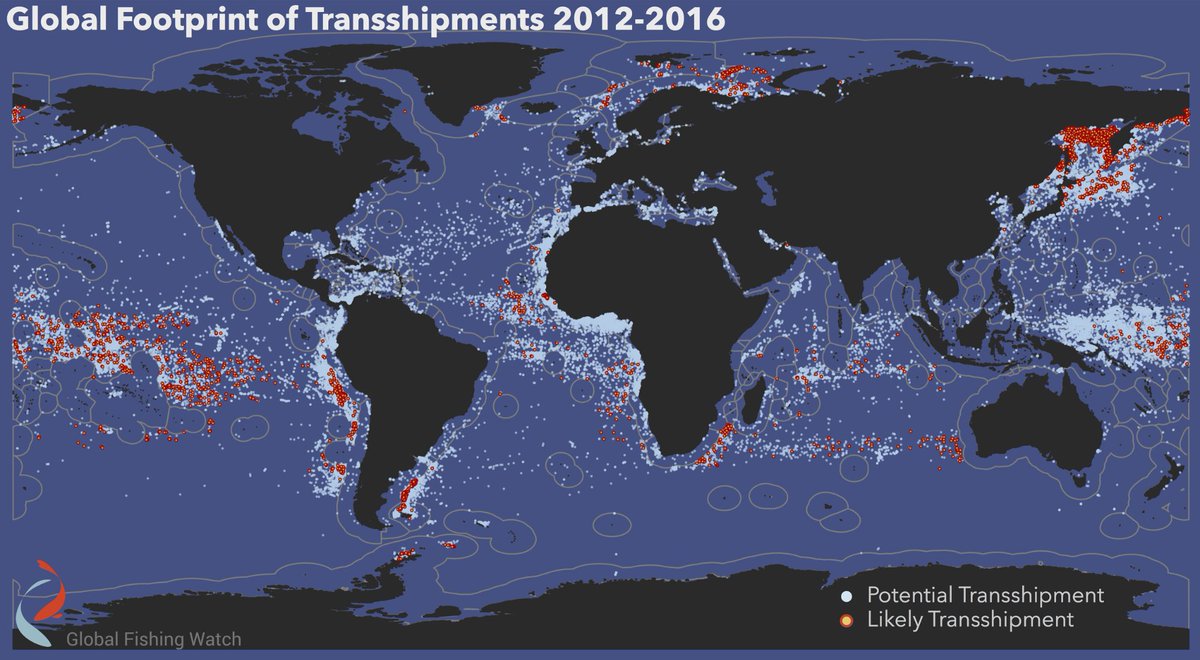 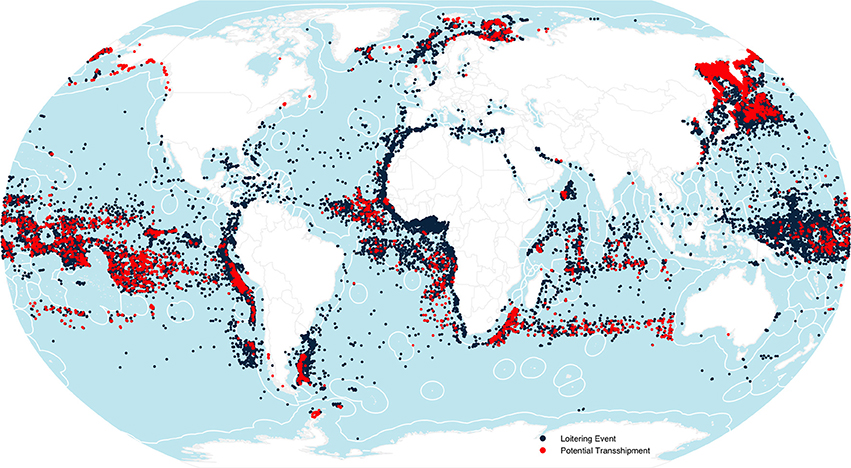 Global patterns of transshipment behavior illustrating encounters (red) and loitering events (black). Highest densities appear in the Russian Far East and the Barents Sea, outside the Exclusive Economic Zones (EEZs) of South America, within the EEZs of African nations, and across the Equatorial Pacific.

The lack of consistent regulation enables illegally caught fish to enter the market.
It also creates the opportunity for other illegal activities relating to drugs and even people.
"Some human rights abuses have been associated with transshipment. By allowing fishing vessels to remain at sea for months or even years at a time, captains are able to keep their crew at sea indefinitely, resulting in de facto slavery," say Miller.


Global Fishing Watch’s new encounters layer reveals for the first time where and when thousands of vessels are involved in close encounters at sea.

The outcomes associated with this poor regulation motivated the researchers from Google, Skytruth and Global Fishing Watch.
They wanted to create a transparent and publicly available way of identifying and sharing transshipment behaviors on a global scale. 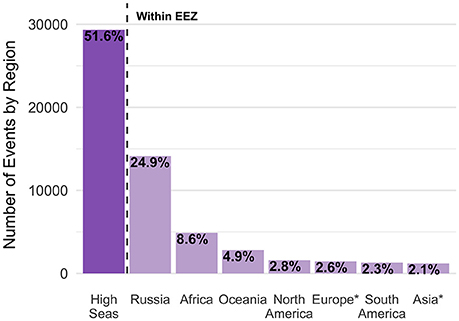 Geographic distribution of loitering events and encounters (combined).
Roughly 52% of the events occur in the high seas.
*Note that Russia is presented separately.

To do this, the team analyzed over 30 billion vessel tracking signals to identify potential transshipment encounters.
This included refrigerated cargo vessels loitering at sea long enough to receive a transshipment, or two vessels in close proximity long enough to transfer catch, crew or supplies.
"Our research is unique in its scale, but also in that we use a big data technology platform and satellite tracking data to provide the first public view of the potential extent of global transshipment," says Miller.

Analysis of the data showed that transshipment activities occur on a global scale, yet some areas had particularly high activity.
"Transshipment activities were observed in all ocean basins, but were most common in international waters," says Miller.
"Nearly half of the events we tracked occur on the high seas and involve vessels that are registered in countries which may differ from the vessel's owner and provide minimal oversight. This means that a vessel may be held to less strict standards and regulations than its home country would require."
"The prevalence of events outside of national waters in much of the world is juxtaposed by the prevalence of events in Russian waters, as well as those involving foreign vessels within the waters of western African nations," says Miller.
"While the activities within Russian waters predominate, the activities within the waters of western African nations are of considerable concern."

As could be expected with such a large dataset, the limitations of the data also need to be taken into consideration before conclusions should be drawn.
"The use of the vessel tracking system, from which we derived these data, varies globally and among fleets. Operators can turn off the tracking device or broadcast incorrect identity information and crowded regions of the ocean can affect tracking accuracy. However, we can account for these limitations and our results change only modestly if we alter the parameters," says Miller. 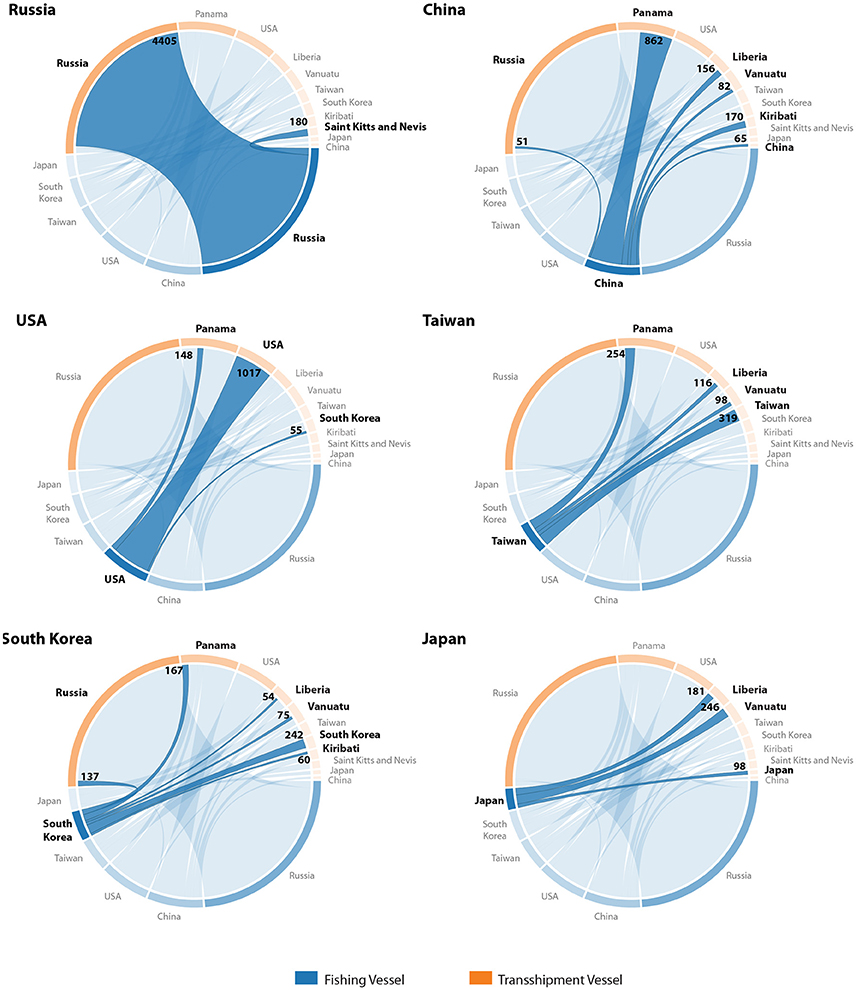 Overall, the results suggest that many transshipment events occur beyond any nation's jurisdiction, where the monitoring and regulation of fishing activity is limited.

The team hope their research will act as a starting point to encourage a more transparent and sustainable fishing practice.

"We hope our results will expose the potential association of transshipment with illegal fishing and other criminal activities, as well as stimulate discussion on sustainability and management of high seas fishing," says Miller.
"Tackling the sustainability and human rights problems associated with transshipment at sea will require global perspective and cooperation."