From Washington Post by Chris Mooney and Brady Dennis

Humans are now fishing at least 55 percent of the world’s oceans — an area four times larger than the area occupied by humanity’s onshore agriculture.

That startling statistic is among the findings of a unique, high-tech collaboration that is providing a massive amount of new data about global fishing operations.
The results, published Thursday in the journal Science, offer a powerful glimpse of the problem of overfishing on the hard-to-regulate high seas.
According to the Food and Agriculture Organization of the United Nations, 31.4 percent of global fish stocks were overfished or fished unsustainably, as of 2013, while another 58.1 percent were “fully fished.” 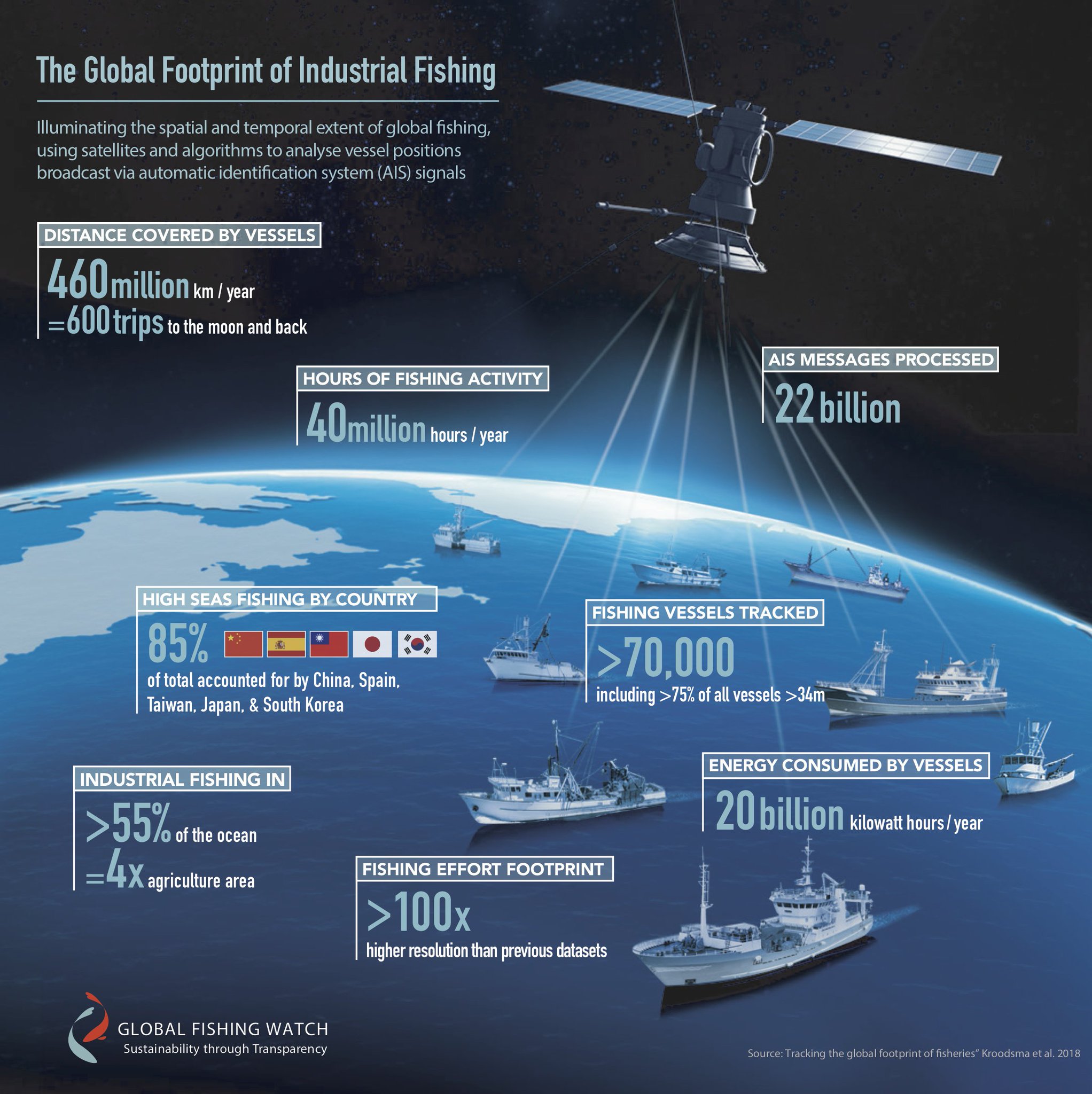 The result was a picture of fishing that the study, led by David Kroodsma of Global Fishing Watch, says “has never been directly quantified.”
Because of data limitations, the percentage of the oceans fished could be as high as 73 percent, the study said.

The Dynamics of the Global Fiching Fleet - interactive-

“Fishing is happening almost everywhere and all the time,” said Jackie Savitz, chief policy officer for the advocacy group Oceana.
“I think people don’t really have a sense of how heavily fished our oceans are and how intensely they are fished.”
She said the intensity of global fishing documented by Thursday’s study is far greater than researchers have been able to track in the past.
“That means we’re putting more pressure on fish populations,” Savitz said, noting that increased fishing also means more inadvertent catching of other species, such as sea turtles.
“That means there’s more pressure on our oceans than we thought.”

There was particularly intense fishing off the southeastern coast of South America, the eastern coast of China, western Africa, and all around Europe and the Mediterranean, the research found.
The North Atlantic, far northeastern Pacific, Indian Ocean and Southern Ocean were far more devoid of fishing.

Here’s one image of the fishing pattern off the coasts of the northeastern United States/Canada and UK/France : 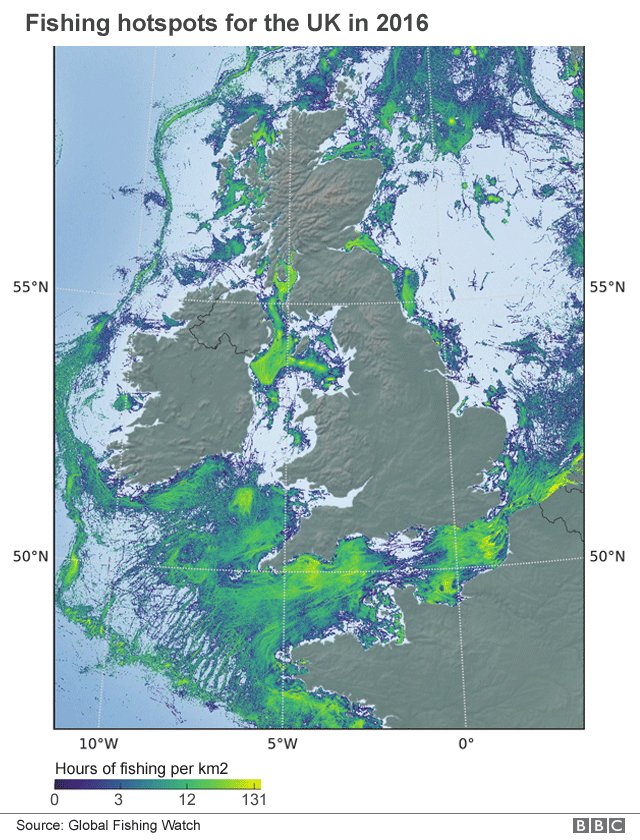 While Thursday’s study itself doesn’t delve into what areas are being overfished around the world, Savitz said experts have long documented overfishing in many places.
But she said the latest data helps illustrate that “the tragedy of the commons is very much at place in the oceans,” and that it underscores the need for a more thoughtful global approach to regulating fisheries.

“What we need to do is, both within countries and internationally, put in place sustainable fishery management policies,” Savitz said.
“Unless we get policies in place to protect fishery sustainability, what we’re essentially doing is undermining our food security.”

The study found that ships from just five nations accounted for more than 85 percent of global fishing — Spain, Taiwan, Japan, South Korea and China.
China’s fishing footprint was by far the largest, however, based on data for the year 2016.
(The study used data from 2012 through 2016.) This graph shows the number of fishing hours by flag state in 2016.
(Global Fishing Watch)

One leading fisheries scientist said that while the study’s methodology is novel, overall it reaffirms an existing picture of how much the oceans are being fished.

“The results are remarkably consistent with the catch data that have been traditionally employed to measure fishing effort,” said Jeremy Jackson, a marine sciences expert at the Scripps Institution of Oceanography, by email.
“Ditto the fact that China, Spain, Taiwan, Japan and South Korea take 85 percent of it all on the high seas. Still, it’s good to see the strong confirmation, and of course it’s unsustainable without massive restrictions in effort.”

Daniel Pauly, a prominent expert on global fisheries and a professor at the University of British Columbia, added that Thursday’s study “adds a new dimension to the scientists’ and fisheries manager’s tool kit, a very effective one.”
“It can be seen as one of the first instances of high-tech being turned against illegal fishing (until now, it was the pirates who used it),” he wrote in an email from Hong Kong.
“What is new is that the [Global Fishing Watch] enables civil society to use satellites to monitor the activity of fishing vessels, and thus to fight against illegal fishing and to increase transparency.”


Global Fishing Watch uses data broadcast from ships at sea to map more than 60,000 industrial-sized fishing vessels.
In 2017, nano-satellite data from Spire increased resolution by nearly doubling the data in the platform.

In addition, Pauly said, the data help make a case that all fishing vessels — not only the large commercial ones operating far offshore — should be satellite-monitored.
“The next thing is thus to pressure the International Maritime Organization to close the loophole they have for smaller, coastal fishing vessels, which do not need to have [electronic tracking systems].”

The technology used by Global Fishing Watch to conduct the study relies on public broadcast data from the Automatic Identification System (AIS), which uses satellite and land-based receivers to track the movement of ships over time.
Not all fishing vessels willingly broadcast their location, of course — particularly those intent on breaking the law — and vessels can switch off their trackers, potentially hindering the usefulness of the technology.

But the United States and other countries already require vessels of a certain size to use the locator system, partly as a safety measure to avoid collisions at sea.
Global Fishing Watch allows users to access that information to track specific vessels over time. 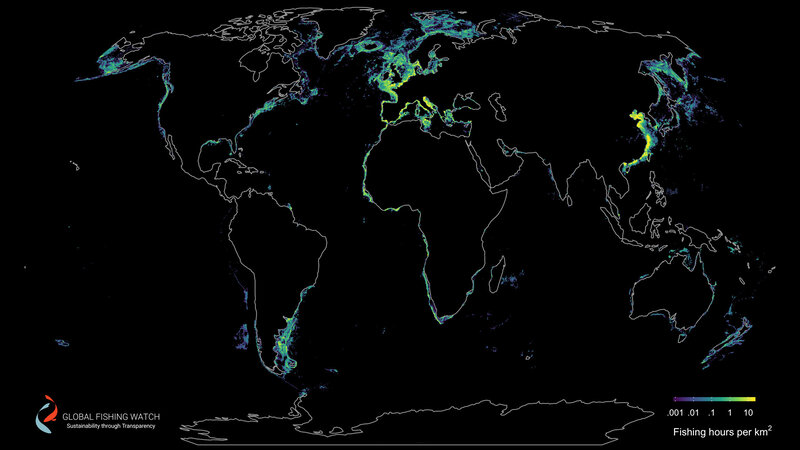 This map shows fishing by trawlers, which drag fishing nets behind them.
They dominate fishing in coastal areas, such as fisheries near Europe and China 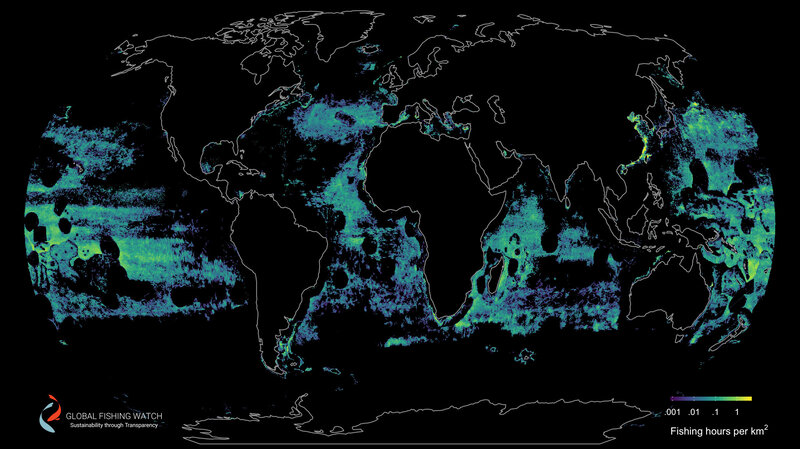 This map shows activity of fishing vessels that use drifting longlines.
They roamed the high seas, especially in tropical latitudes

The new satellite technologies are one part of a broader, ongoing international push to reduce overfishing in the oceans and cut back on illegal fishing.
One 2014 study found that between 20 and 32 percent of fish imported to the United States were caught illegally.

“The problem is just gigantic,” then-Secretary of State John F. Kerry told The Washington Post in an interview in 2016.
“A third of the world’s fisheries are overfished, and the ones that aren’t overfished are at max, with more and more demand. …
It’s an ecosystem that requires sustainability to survive, and we’re not treating it in a sustainable fashion.”

Despite the huge scale of the effort, the fishing captured in the study represented only 1.2 percent of all the calories produced for humans to eat, the study found.
However, as the Food and Agriculture Organization notes, these are particularly beneficial calories, because fish provide amino acids, fats, vitamins and other key nutrients and help prevent cardiovascular illnesses.

Thursday’s study also shed light on the sheer scale of global fishing, noting that in 2016 alone, the ships that were tracked spent 40 million hours at sea and traveled 460 million kilometers — “equivalent to traveling to the Moon and back 600 times.”