In 1939, Coast Survey published its first chart with a new focus on depth contours.
The new depth curves helped navigators of that era locate the position of their vessels by comparing a line of echo soundings with the charted depth contours.
Publisher:     US C&GS Coast & Geodetic Survey (1939)
Image: 5101a-03-1939  / Scale: 1:232702

In 1844, the United States Coast Survey published its first official nautical chart.
It was the result of an immense amount of manual topographic and hydrographic surveying, manual drafting, manual engraving on copper printing plates, and manual intaglio printing (using black ink from copper plates).
In 1939, the United States Coast and Geodetic Survey (C&GS) published its first nautical chart that included isobaths as the primary representation of the seafloor rather than individual depth soundings.
Data for the isobaths were collected by a recording echo sounder, while topographic revision was performed from aerial photographs.
The production process included manual and mechanical scribing on wet-plate glass negatives; additional chart compilation using photography to merge in standard elements; photographic transfer to aluminum lithographic printing plates; and printing in multiple colors on a powered rotary offset press.
A major innovation for the C&GS came in March 1939 with the publication of a new edition of Chart 5101, designated 5101A (U.S. Department of Commerce et al. 1940, 99; Shalowitz 1964).
It marked the beginning of a new role for bathymetric contours.
It was the first chart designed for ships that have their own echo-sounders on board.
Recording echo sounders allowed the survey to collect orders of magnitude more information about landforms at the bottom of water bodies.
Continuing to place primary responsibility for representing this information with the point data that soundings represent did not do justice to the richness of the data now available.
Instead of playing a subsidiary role to the soundings on the chart, contours could now play the same role as topographic contours, that of being the primary representation of the land surface.
This change in role can be seen in such chart editions as MH400 1938, 1942, and 1951, and E1200 1927, 1938, and 1948.
As these series progress, contours gain significant detail, while soundings either remain as they were or, as in E1200 1948, are dramatically reduced.
( source : NOAA, a cartographic history by Jonathon L. McConnel) 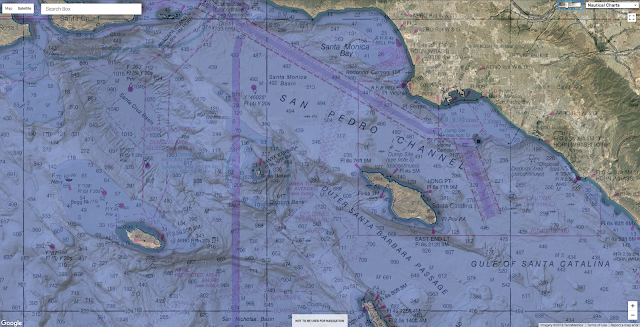 
The beginning of the full transition away from the last of the original techniques began in 1939 when the first chart was published that fully incorporated the possibilities for different symbology offered by the vast quantities of data created by recording echo sounders.
Charts continued to evolve after 1939, entering a new phase around 1980 based on internationally approved symbology, but the greatest changes are evident by 1939.