From Space by Sarah Lewis

A powerful new weather satellite launched today (March 1) from Cape Canaveral Air Force Station in Florida, heading toward a perch above the eastern Pacific Ocean to monitor extreme weather as it develops.

The National Oceanic and Atmospheric Administration (NOAA) will operate GOES-S in partnership with NASA.
The Lockheed Martin-built satellite will join GOES-East, currently in orbit, to provide a broad, high-definition view of weather on Earth.
It is the second in a series of four advanced weather satellites that will reside in geostationary orbit — hanging in place over one spot on Earth as they orbit and the world turns.

"GOES-S will provide more accurate data with higher temporal resolution to track storm systems, lightning, wildfires, the coastal fog [and] volcanic ash plumes that impact the western U.S., Alaska, Hawaii and the coastal to eastern Pacific ocean," Louis Uccellini, director of the National Weather Service at NOAA, said during a news conference Tuesday (Feb. 27).
"There are unique aspects of these intense Pacific storms that we'll be able to observe more accurately and use in our forecast process."
"I believe very strongly GOES-S will improve the scientific understanding for the western U.S., just like GOES-East has for the eastern U.S., and is another step forward in our overall effort to build a weather-ready nation," Uccellini added. GOES-16 imagery of Hurricane Harvey making landfall in Texas on
August 25, 2017. (NOAA)
Like GOES-16, which provided groundbreaking new data and imagery during the severe 2017 Atlantic hurricane season, GOES-S will bring this same new technology to the Pacific Ocean.
This means forecasters will have new high-resolution imagery of atmospheric rivers, as well as Pacific hurricanes that track toward Hawaii or Mexico during the summer and autumn.

The current GOES-East satellite launched in 2016, and it has provided views of developing weather in unprecedented detail.
NOAA used GOES-East to track hurricanes Harvey, Irma, Maria and more, as well as January's bomb cyclone and other extreme weather events, including wildfires developing in northern Texas.
The new GOES-S will be at a vantage point to help analyze California's wildfires in more detail, as well.
The satellite will scan the skies five times faster than the GOES-West satellite it will replace, will have four times the spatial resolution and use three times as many spectral bands.
Besides fire, lightning and tropical storms, the satellite can also track the influx of charged particles and radiation from the sun called space weather.

The satellite will be able to scan each spot below it every 5 minutes, or every 1 minute to 30 seconds on special focus areas — in the latter case, for developing weather events.
Together, GOES-S (which will be renamed GOES-West) and GOES-East will be able to focus on four locations to refresh views every minute, or two locations to refresh views every 30 seconds.

"Those of us in the severe weather community are really excited about the data we're seeing from GOES-16 [GOES-East]," Kristin Calhoun, a research scientist with NOAA's National Severe Storms Laboratory, said during the conference.
"And we're also eagerly anticipating the increased coverage from GOES-S across the United States." You don’t have to live on the West Coast to know that coastal fog is a hallmark weather event in places like San Francisco and parts of the Pacific Northwest.
Not only will GOES-S provide high-resolution, real-time imagery of fog conditions, but the satellite’s rapid scanning capabilities will also help forecasters predict when fog will clear.

At the news conference and at another one held earlier on Feb. 27, NOAA and NASA researchers shared stories of how GOES-East's remarkably clear views have aided in search-and-rescue operations as well as in forecasting.
During Hurricane Harvey, for instance, data from the satellite allowed first responders to know when it was safe to go out as the storm's eye passed overhead, rescuing more than 200 people — and when to take shelter just before the back of the eyewall swept back over.
During wildfire season in California, people using GOES data were able to warn local authorities about fires before they'd even been spotted on the ground.

And just viewing weather events in so much detail makes it easier to learn how they work.

"The impact of the visualization, the actual videos, the movies coming out is really visceral," Steve Volz, NOAA's director for satellite and information services, said in the earlier conference.
"It allows the researchers to see the dynamics in a way that just looking at numbers just doesn't reveal — the visual impact is remarkable." Special mention: A major upgrade for AlaskaCurrent geostationary satellite coverage of Alaska, such as this recent GOES-15 visible imagery, will be replaced by high-resolution imagery in 16 different
channels.
GOES-S will boost weather prediction all across the western U.S., but the new satellite will be especially valuable to Alaska.
That’s because NOAA’s current geostationary satellites lack sufficient resolution in regions near the Arctic.
GOES-S, however, will provide a significantly clearer view of the Last Frontier - all the way to Alaska’s North Slope, and allow for applications such as tracking sea ice.

The satellite was deployed a little after 8:30 p.m. EST today (1:30 a.m. GMT on March 2).
It will now spend about three weeks making its way into geostationary orbit.
After about six months at that latitude preparing its instruments and running checks, it will move to its final vantage point over the eastern Pacific Ocean, taking on the official name GOES-West.

GOES-S will complement other geostationary satellites, like GOES-East, as well as polar-orbiting satellites like JPSS-1, which launched last November.
Several other nations share weather satellite data with each other and NOAA to provide more complete coverage. 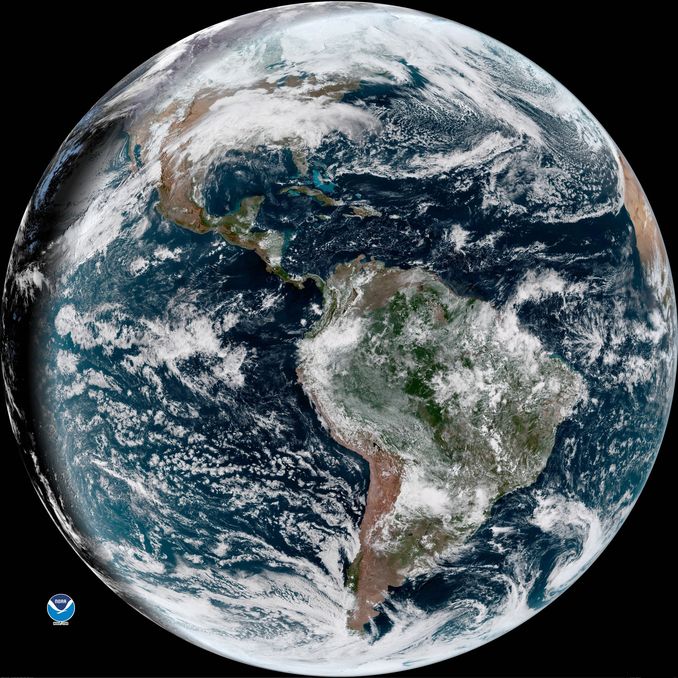 The four-satellite GOES-R program has a total budget of $10.8 billion through its entire life cycle.
Development began in 2005, and the program will extend through 2036.
The next satellite, GOES-T, is scheduled for launch in 2020.