Some 95% of the ocean is completely unexplored, unseen by human eyes.
That naturally means that there are many marine environments that we don’t know much about, but that we’re still putting at risk from damaging activities such as bottom trawling.
Meadows of seagrass – flowering plants that live in shallow, sheltered areas – are a prime example of such a habitat.

Knowing the location and value of environments such as seagrass meadows, which are a nursery for fish, is key if we are to tackle our biodiversity crisis.
With 70% of the Earth covered by ocean, exploring it all presents an enormous challenge.
Thankfully, seagrass meadows are restricted to the shallow waters (less than 90 metres deep), but finding them still isn’t easy.

From charismatic and endangered species like seahorse, turtle and dugong to important food fishes like cod and herring, seagrass meadows support rich biodiversity.
Importantly, 22% of the world’s most landed fish species (including the Atlantic cod) use seagrass as a home at some stage in their life.

Seagrass meadows also provide one of the most effective stores of carbon on our planet.
Sustaining this store may be an important part of mitigating the worst impacts of climate change.
Marine vegetated habitats, which include seagrasses, salt-marshes, macroalgae and mangroves, occupy only 0.2% of the ocean surface, but contribute 50% of carbon that is stored in ocean sediments.
Knowing where this carbon is stored will help us to keep it in the ground.

The use of satellites is often considered to be a panacea for understanding habitat distribution.
This is not the case for shallow water seagrass meadows though.
If you can’t see the seagrass (due to turbid water) with a snorkel and mask, then how do you expect a satellite to see it?
Solutions for locating and mapping seagrass are needed that go beyond space observation. 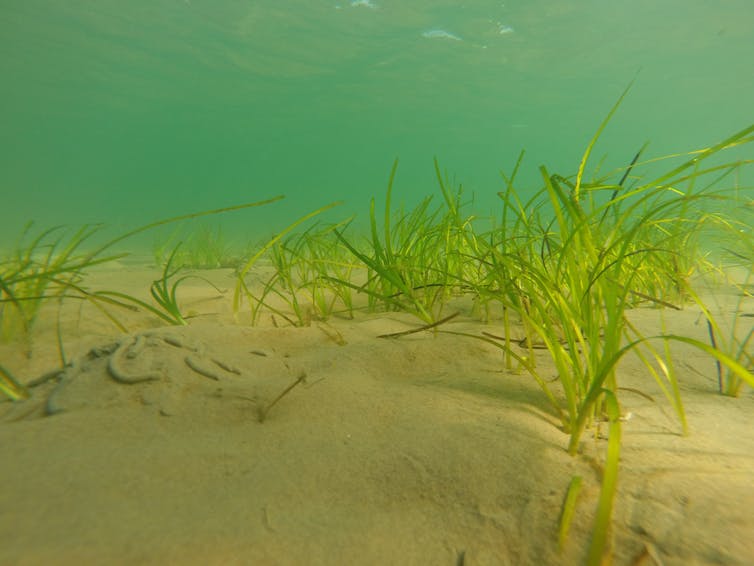 Seagrass meadows are present around the coasts of all continents except the Antarctic.
Benjamin Jones, Author provided

Although seagrass meadows are of fundamental value to people, data on their distribution and health around the world is limited.
To date, around 600,000km² of seagrass has been mapped globally, but it is estimated there could be some four million km² of it.
If we are to protect this key marine habitat, we need to know exactly where it is as there are a myriad of threats to these powerhouses of the sea, including poor water quality and climate-related impacts followed by extreme weather events.

The scale and cost of responding to this challenge appears to be beyond the capacity of most governments.
This is a logistical, as well as a financial issue.
Even in developed countries such as the UK there is not a reliable estimate of seagrass extent, which could be over 600km².

To plug this significant global information gap a new approach is needed.
This approach should enable partnerships and encourage data sharing between governments, private enterprises, conservation groups and the general public.
To achieve this we need user-friendly tools and resources that can draw on a global community of citizen scientists to help understand these amazing habitats.

Citizen science has contributed to major scientific breakthroughs, most notably in space.
They represent a potential research team that could be drawn upon to help solve some of the challenges facing seagrass meadows today.
Citizen science enables us to crowdsource data and engage people in conversations about why we need to protect biodiversity and other resources provided by nature.

As seagrass prefers sheltered and shallow coastal bays, it is an ideal candidate for citizen science programmes.
It is easily accessible, and its functional characteristics mean that answering broader questions about its health, reproductive status or even associated fauna can be met using targeted citizen science campaigns.

Our new research, published in the journal Marine Pollution Bulletin, illustrates how citizen science platforms can be a key means of collecting much needed information to secure a future for seagrass.
Such platforms can also inspire a new generation of seagrass scientists wishing to conserve them – and help meet the challenge of making seagrass a familiar species. 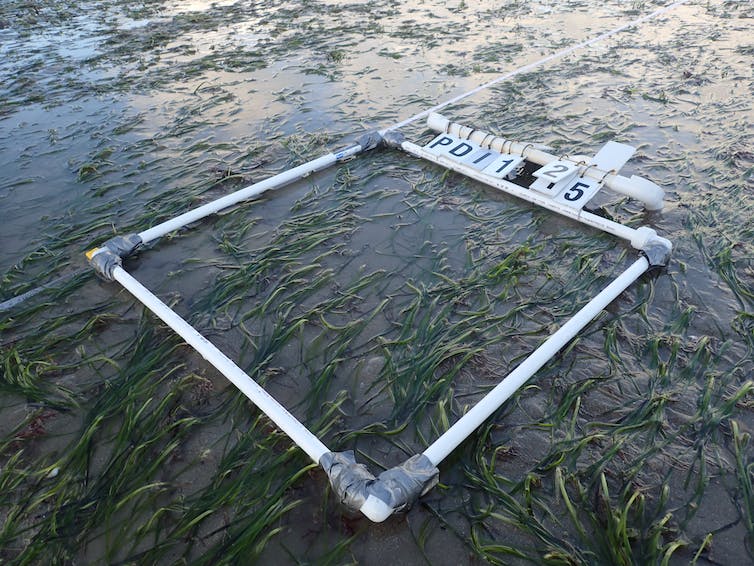 Pictures taken of intertidal seagrass can be a valuable way of citizen scientists helping to map seagrass.

One platform, SeagrassSpotter (created by scientists at Swansea University, Cardiff University and the marine conservation charity Project Seagrass), was developed to engage and support budding seagrass citizen scientists.
In a Pokémon-Go style, SeagrassSpotter aims to engage citizens from around the world to find and document seagrass meadows.
They may do this when walking at low tide, snorkelling or when diving underwater.

In effect, the programme provides a means for untrained scientists to collect reliable and geo-referenced data on seagrass presence and condition – data that is typically costly and logistically difficult to collect on a regular basis.

SeagrassSpotter was officially launched in 2015.
To date, over 750 observations have been recorded by 360 users from 94 locations throughout the North Atlantic, Mediterranean and Caribbean regions.
This includes one sighting of a seagrass meadow in Wales that was last recorded in 1891.
Over the coming months, SeagrassSpotter will be expanded to include more regions of the world.

We believe that while governments should have a statutory responsibility to monitor, map and understand our important seagrass resources, it’s unrealistic to expect this to be complete.
If recent viewing figures for the documentary series Blue Planet II are anything to go by, members of the public are becoming more interested in the marine environment.
Securing a future for seagrass could well lie in the hands of local people (literally) acting as citizen scientists.