The mystery 'shadow zone' in the Pacific Ocean that hasn't moved in more than 1,500 years due to the unique shape of the seabed and its impact on currents 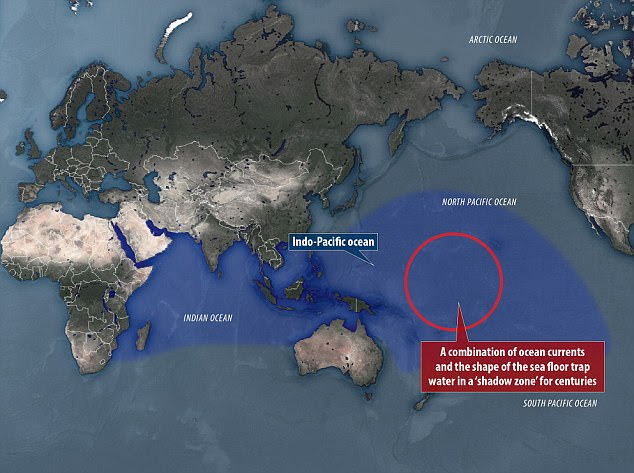 From DailyMail by Tim Collins

The 'shadow zone' covers an area 3,700 by 1,250 miles (6,000 by 2,000 km)
It is found between 0.6 and 1.5 miles (1 and 2.5 km) beneath the ocean's surface
Experts used computer modelling of ocean currents to work out how it formed
It revealed the shape of the ocean floor prevents any upward currents forming

In the North Pacific, way below the surface, hangs water that hasn't seen the sun in a millennium.
Tibor Kranjec / Eyeem

A mysterious patch of water in the Pacific Ocean hasn't touched the surface since the fall of the Roman empire.
Experts used computer modelling of deep sea currents to reveal the reason why the vast 'shadow zone' has remained near stagnant for around 1,500 years.
They found that it sits in between layers of water with currents driven by heat from the Earth below and whipped up by wind above.

The unique shape of the ocean floor means that upwards currents don’t reach high enough to push the layer upwards, leaving it in a no man’s land between the two. A mysterious patch of water in the Pacific Ocean hasn't touch the surface since the fall of the Roman empire.
Experts found that it sits in between geothermal driven currents below and wind driven currents above

Carbon dating has previously been used to identify its age and location, but scientists didn't understand what caused it to form.
By including the shape of the ocean floor in their simulation, the team was able to measure its impact on the movement of currents.
They found that water at the bottom of the ocean, heated by geothermal energy deep within the planet, was unable to rise above 1.5 miles (2.5km) below the surface.

Instead of travelling upwards, currents loop back on themselves horizontally, leaving the layer directly above untouched.
Dr Casimir de Lavergne, lead author from UNSW, said: 'Carbon-14 dating had already told us the most ancient water lied in the deep North Pacific.
'But until now we had struggled to understand why the very oldest waters huddle around the depth of 1.2 miles (2km).
'What we have found is that at around 1.2 miles (2km) below the surface of the Indian and Pacific Oceans there is a 'shadow zone' with barely any vertical movement that suspends ocean water in an area for centuries.'

While the researchers have unlocked one part of the puzzle, their results also have the potential to tell us much more.
The lack of contact with the ocean's surface means oxygenation of the zone is very low.
That means marine life is restricted, but not completely absent.

It is hoped that the research could help scientists better understand the capacity of the oceans to absorb heat trapped by rising greenhouse gases.
'When this isolated shadow zone traps millennia old ocean water it also traps nutrients and carbon,' added fellow author from Stockholm University, Dr Fabien Roquet.
'[These factors] have a direct impact on the capacity of the ocean to modify climate over centennial time scales.'

The full findings of the study were published in the journal Nature.