Can an autonomous sailboat cross the Atlantic ?

Sailing a boat across the Atlantic is challenging enough for a human sailor.
But what about a computer?
BBC Future visits a sailing regatta for robots.

From BBC by Nathan Hurst

No one has ever sailed an autonomous boat across the Atlantic.
Few have even tried – just a handful of teams have competed in the transatlantic Microtransat Challenge since it began in 2010.
All have failed, for reasons including “caught in a fishing net”, “picked up by a fishing boat” or, frequently, simply lost at sea with a vague last-known location.

The closest anyone has ever come was the summer of 2017, when a boat called Sailbuoy, built by a company called Offshore Sensing, travelled 1,500 kilometers – more than half way – before it started going in circles.

Officially, the winner of the Microtransat is the fastest team to achieve the crossing; in reality, the winner is the first.
They have set rules, like a maximum vessel length (2.4m or 8ft) and an obstacle/collision avoidance system.
But teams can just launch their boat anytime between July and December, and it doesn’t even matter what direction they go – Newfoundland to Ireland, or vice versa.
Competitors include university clubs, but also autonomous vessel companies like Offshore Sensing (a company that makes sail-powered autonomous research vessels), and even the US Naval Academy.
The main goal is just finishing, after all.

The boats had to compete in the same kind of events that would test human sailors
(Credit: Aland Sailing Robots)

“It’s just a really challenging environment,” says David Peddie, CEO of Offshore Sensing.
“You have to cope with anything the ocean can throw at you.”

Sailbuoy has a bit of an advantage.
It’s a commercial company that sells similar boats for applications in oceanography and meteorology research.
The vessel it sent on the Microtransat had previously completed several months of autonomous sailing in the rougher North Sea without any problems.

From the top, the boat looks a little like a surfboard, with a solar panel in the middle, and a short, trapezoidal sail near the front.
Aside from the sail, it sits low in the water, cutting through with a tapered nose and tail.
Rough seas toss it about, even washing over the top, without damaging it, and it seems, almost miraculously, to keep a steady course.

Others have eyes on the challenge, too, and new ideas on how to solve it.
At the Aland University of Applied Sciences, a small team of engineers has been building robotic sailboats and entering them in competitions since 2013.
This year, they bought a 2.8m (9.2ft) rigid “wing” type sail – the kind of symmetric airfoil you might see on World Cup sailboats – from a Swedish aircraft manufacturer and mounted it on their 2.4m (8ft) sailboat, ASPire. 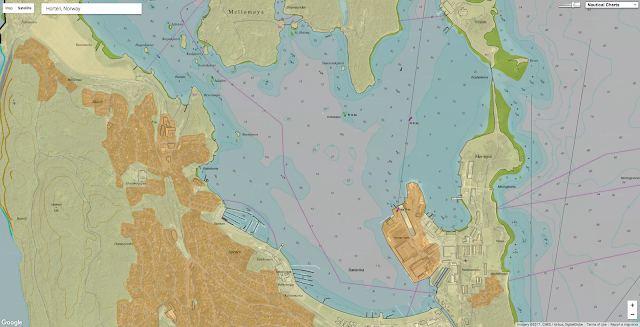 ASP stands for Autonomous Sailing Platform, and it’s white like Sailbuoy, but with a deeper, narrower hull and the tall, rectangular wing sail, flanked with two smaller airfoils.
Both rigs were built not to compete in a race, but to act as research tools, carrying water sensors to measure pH, temperature, conductivity, and salinity.
Despite the focus on research, the risks of using the new and unproven wing sail, and an untested system, Aland Sailing Robots entered its vessel in September’s World Robotic Sailing Championships, held in Horten, Norway – and won.

The World Robotic Sailing Championships is a spin-off of the Microtransat in which teams from universities or companies in related fields compete over four days in different tasks, including a fleet race, an area-scanning competition, collision avoidance, and station keeping, where the boat must hold its position for five minutes.

On a windy first day along Norway’s Oslofjord inlet, a staggered-start race saw ASPire launch shortly after a boat from Norway.
As the boats headed out into Horten’s inner harbour, a bay next to a shipyard with Sweden visible across the water, the team from Aland watched their boat slowly catch, then pass the leading boat.

Some of the robot boats will eventually try to cross the Atlantic under their own power
(Credit: Aland Sailing Robots)

“That was good to see,” says Anna Friebe, project manager for Aland Sailing Robots.
“I didn’t really think we would be able to compete.
But it ended up working, just in time.”

While the team’s strength is in software engineering and situational analysis, they still have to be adept enough at mechanical engineering to make the boat operate in the challenging seas.
ASPire was built on a hull with stabilising lead weights in the keel that was used in a paralympic sailing competition.
To this, in addition to the wing sail, the team mounted the research sensors and built a rig to winch those down into the water.

The boats at the World Robotic Sailing Championships vary in size and shape, from the futuristic-looking ASPire to a small, traditional two-sailed sloop that looks like the kind of remote-control sailboat a kid might sail on a pond.
On the second day of the competition, the fjord was shrouded in rain as the boats used the wind, the angle of their sails, and their rudders, to sit precisely in position without moving.
Like all the competitions, an onboard computer, programmed ahead of time, had to be capable of recognising the wind conditions, understanding its own location, and manipulating the sail and rudder to compensate.
This too, Aland won, ahead of second-place hosts University College of Southeast Norway and US Naval Academy in third place.

Day three featured area scanning, where boats had 30 minutes to cover as much of a designated area as possible.
Most used a traditional tacking manoeuvre to trace a path, playing out line to open the sail, or reeling it in to change the angle.
ASPire’s wing sail instead rotated around a central mast, which Friebe says simplified the operations.
Seen from overhead, ASPire’s path looks like a lawn-mower grid, compared to other boat’s piles of spaghetti, and so Aland made a full sweep, as day four’s collision avoidance event was cancelled due to a lack of sufficient wind.

Aland Sailing Robots was formed to compete in the Microtransat, but financial pressure – most of their funding comes from the European Regional Development Fund and goes toward the marine research platform – means they haven’t had the resources to make an attempt at the crossing.
The fun of competition and the long-term quest to cross the Atlantic are, for many of the participants, byproducts of business or research projects.


The aim of the Microtransat, according to organiser Colin Sauze, is to contribute to ocean-monitoring platforms, but also to provide a learning opportunity.

Both Aland and Offshore Sensing are focusing primarily on aquatic research.
Robots offer several big advantages over the other means of acquiring ocean data, says Peddie.
The other options – a drifting buoy, or a manned vessel – are less mobile or more expensive.
A traditional research vessel can cost $20,000 (£15,180) per day, which Peddie says could run an autonomous sailboat for several months, including the cost of the boat.
Furthermore, small boats (Sailbuoy is two metres long and weighs 60kg (200lbs)) can go places manned boats can’t, like the path of a hurricane, or volcanic or iceberg fields.

Many of the other teams, both in the Microtransat and the World Robotic Sailing Championships, are either run by industry, or partnered with industry.
The US Naval Academy team uses it as education for naval personnel (their boat, Trawler Bait, has been caught by fishermen more than once).
Half of the Chinese team is from Shanghai University, and the other half is from a company.
The Norwegian naval research institute sent an autonomous boat to help with the event.

And a lot of what they work on can be applied even beyond sailing vessels.
Autonomous shipping is already burgeoning, and the standards Microtransat competitors must meet for collision avoidance are the same ones put out by the International Maritime Organisation, and the automatic identification system that the Aland team used to transmit and receive course and speed to other vessels is the same one that commercial ships use.

“For us, as a company, it wasn’t a really big deal, the actual Microtransat,” says Peddie.
“But I’ve been following these guys for a number of years, and I think it’s an interesting concept.
It’s also something which has historic significance, like Lindbergh flew over basically the same distance connecting America to Europe.”

Still, Peddie plans to try again next year, once the Sailbuoy, which was picked up by a fishing vessel, is returned and fixed (they still don’t know quite what’s wrong with it).
“We’d just like to be the first ones who do it, and manage to cross this part of the ocean,” he says.
“Next year I expect we’ll manage the full 3,000 miles.”