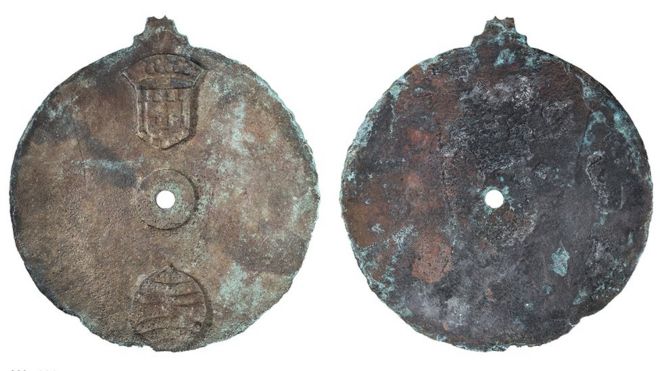 The instrument was once used by mariners to measure the altitude of the Sun during their voyages
photo : Philip Koch

An artefact excavated from a shipwreck off the coast of Oman has been found to be the oldest known example of a type of navigational tool. 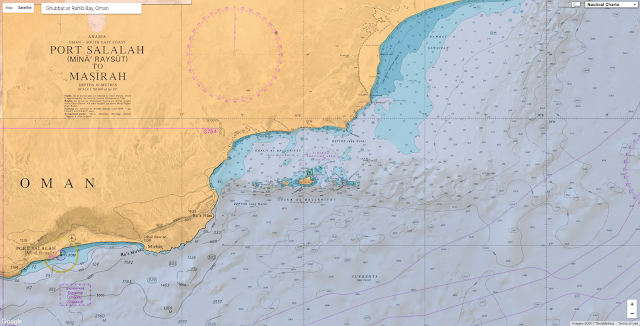 This copper-alloy disc, bearing the Royal coat of arms and the armillary sphere of Dom Manuel I is an important object although its precise identity & function is still unknown.
It does have features suggesting it could be an astrolabe, or part thereof.
The item was found in 2014 in a shipwreck in the Indian Ocean as one of nearly 3,000 objects recovered from the wreck, but it had no visible signs of navigational markings - until now.Esmeralda Shipwreck - The Official Vasco da Gama Expedition

Marine archaeologists say the object is an astrolabe, an instrument once used by mariners to measure the altitude of the Sun during their voyages.

It is believed to date from between 1495 and 1500.
The item was recovered from a Portuguese explorer which sank during a storm in the Indian Ocean in 1503.
The boat was called the Esmeralda and was part of a fleet led by Portuguese explorer Vasco da Gama, the first person to sail directly from Europe to India.

David Mearns, from Blue Water Recovery, who led the excavation and is the author of The Shipwreck Hunter, told the BBC: "It's a great privilege to find something so rare, something so historically important, something that will be studied by the archaeological community and fills in a gap."

The astrolabe was discovered by Mr Mearns in 2014, and was one of nearly 3,000 artefacts recovered during a series of dives.
The bronze disc measures 17.5cm in diameter and is less than 2mm thick.
"It was like nothing else we had seen and I immediately knew it was something very important because you could see it had these two emblems on it," said Mr Mearns.
"One I recognised immediately as a Portuguese coat of arms... and another which we later discovered was the personal emblem of Don Manuel I, the King of Portugal at the time."

The excavation team believed the object was an astrolabe, but they could not see any navigational markings on it.

However, a later analysis uncovered its hidden details.
Laser scanning work carried out by scientists at the University of Warwick revealed etches around the edge of the disc, each separated by five degrees.

The University of Warwick used laser scans to uncover etches on the astrolabe,
which helped navigators work out the height of the sun

This would have allowed mariners to measure the height of the sun above the horizon at noon to determine their location so they could find their way on the high seas.
Mariners' astrolabes are relatively rare, and this is only the 108th to be confirmed catalogued. It is also the earliest known example by several decades.

Mr Mearns said: "We know it had to have been made before 1502, because that's when the ship left Lisbon and Dom Manuel didn't become King until 1495, and this astrolabe wouldn't have carried the emblem of the King unless he was King.
"I believe it's probably fair to say it dates roughly to between 1495 to 1500. Exactly what year we don't know - but it is in that narrow period."
He added: "It rolls back this history by at least 30 years - it adds to evolution, it adds to the history, and hopefully astrolabes from this period can be found."

Posted by geogarage at 2:00 AM