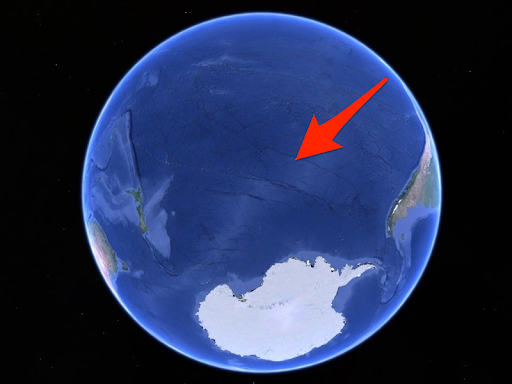 
The most remote location on Earth has many names:
It's called Point Nemo (Latin for "no one") and the Oceanic Pole of Inaccessibility.
Most precisely, its exact coordinates are 48 degrees 52.6 minutes south latitude and 123 degrees 23.6 minutes west longitude.

The spot is about 1,450 nautical miles from any spot of land — and the perfect place to dump dead or dying spacecraft, which is why its home to what NASA calls its "spacecraft cemetery."
"It's in the Pacific Ocean and is pretty much the farthest place from any human civilization you can find," NASA said.
Bill Ailor, an aerospace engineer and atmospheric reentry specialist, put it another way: "It's a great place you can put things down without hitting anything," he said.

To "bury" something in the cemetery, space agencies have to time a crash over that spot.
Smaller satellites don't generally end up at Point Nemo, since, as NASA explains, "the heat from the friction of the air burns up the satellite as it falls toward Earth at thousands of miles per hour. Ta-da! No more satellite."

The problem is larger objects, like Tiangong-1: the first Chinese space station, which launched in September 2011 and weighs about 8.5 tons.

China lost control of the 34-foot-long orbital laboratory in March 2016, and it is now doomed to crash by early 2018.

Where, exactly?
No one yet knows.
Ailor, who works for the nonprofit Aerospace Corporation, said his company likely won't generate a forecast until five days before the space station is expected to break apart in Earth's atmosphere.

When it does, hundreds of pounds of the spacecraft — like titanium scaffolding and glass-fiber-wrapped fuel tanks — could be falling at more than 180 miles per hour just before slamming into the ground (and thousands of miles per hour faster in the upper atmosphere).

Since China doesn't have control of Tiangong-1, it can't assure the space station will disintegrate over Point Nemo.

Astronauts living aboard the International Space Station actually live closer to the graveyard of spacecraft than anyone else.
This is because the ISS orbits about 250 miles above Earth — and Point Nemo, when the orbital laboratory flies overhead. (The nearest island, meanwhile, is much farther away.)

Between 1971 and mid-2016, space agencies all over the world dumped at least 260 spacecraft into the region, according to Popular Science.
That tally has risen significantly since the year 2015, when the total was just 161, per Gizmodo.

Buried under more than two miles of water is the Soviet-era MIR space station, more than 140 Russian resupply vehicles, several of the European Space Agency's cargo ships (like the Jules Verne ATV), and even a SpaceX rocket, according to Smithsonian.com.

These dead spacecraft aren't neatly tucked together, though.

Ailor said a large object like Tiangong-1 can break apart into an oval-shaped footprint of debris that extends 1,000 miles long and dozens of miles wide.
Meanwhile, the land-free zone around Point Nemo stretches more than 6.6 million square miles — so paying your respects to a specific item isn't easy.

While not all spacecraft wind up in the cemetery, the chances are extremely slim that anyone would get hit by debris regardless of where the spacecraft break up on Earth, Ailor said.

"It's not impossible, but since the beginning of the space age .... a woman who was brushed on the shoulder in Oklahoma is the only one we're aware of who's been touched by a piece of space debris," he said.

A bigger risk is leaving dead spacecraft in orbit.

An illustration of space junk. Satellites and debris are not to scale.
ESA

The pernicious threat of space junk

Some 4,000 satellites currently orbit Earth at various altitudes.
There's space for more — even the 4,425 new internet-providing satellites that Elon Musk and SpaceX wish to launch in the near future.

But it's getting crowded up there when considering the threat of space junk.

In addition to all those satellites, there are thousands of uncontrolled rocket bodies orbiting earth, along with more than 12,000 artificial objects larger than a fist, according to Space-Track.org.
That's not to mention countless screws, bolts, flecks of paint, and bits of metal.

"Countries have learned over the years that when they create debris, it presents a risk to their own systems just as it does for everybody else," Ailor said.

The worst kind of risk, according to the European Space Agency, is when a piece of space junk accidentally hits another piece, especially if the objects are large.

Such satellite collisions are rare but do happen; one occurred in 1996, another in 2009, and two in 2013.
These accidents — along with the intentional destruction of space satellites — have generated countless pieces of space debris that can threaten satellites in nearby orbits years later, leading to a kind of runaway effect.

"We've figured out that this debris can stay up there for hundreds of years," Ailor said, later clarifying that some objects in higher orbits, like geosynchronous satellites, can stay in orbit for thousands of years.

Getting old spacecraft out of orbit is a key to preventing the formation of space junk, and many space agencies and corporations now build spacecraft with systems to de-orbit them (and land them in the spacecraft cemetery).

But Ailor and others are pushing for the development of new technologies and methods that can lasso, bag, tug, and otherwise remove the old, uncontrolled stuff that's already up there and continues to pose a threat.
"I've proposed something like an XPRIZE or a Grand Challenge, where would you identify three spacecraft and give a prize to an entity to remove those things," he said.

The most important hurdle to clear, though, may be politics on Earth.
"It's not just a technical issue. This idea of ownership gets to be a real player here," Ailor said.
"No other nation has permission to touch a US satellite, for instance. And if we went after a satellite ... it could even be deemed an act of war."

Ailor said someone needs to get nations together to agree on a treaty that spells out laws-of-the-sea-like salvage rights to dead or uncontrollable objects in space.
"There needs to be something where nations and commercial [companies] have some authority to go after something," he said.