Where is Point Nemo? Point Nemo is the location in the ocean that is farthest from land.
You can't get farther away from land than 'Point Nemo.'

Want to get away from it all?
You can't do better than a point in the Pacific Ocean popularly known as 'Point Nemo,' named after the famous submarine sailor from Jules Verne's Captain Nemo (Twenty Thousand Leagues Under the Sea).

Map of distance to the nearest coastline (including oceanic islands, but not lakes) with red spots marking the poles of inaccessibility of main landmasses, Great Britain, and the Iberian Peninsula. Thin isolines are 250 km (160 mi) apart; thick lines 1,000 km (620 mi).
Mollweide projection. 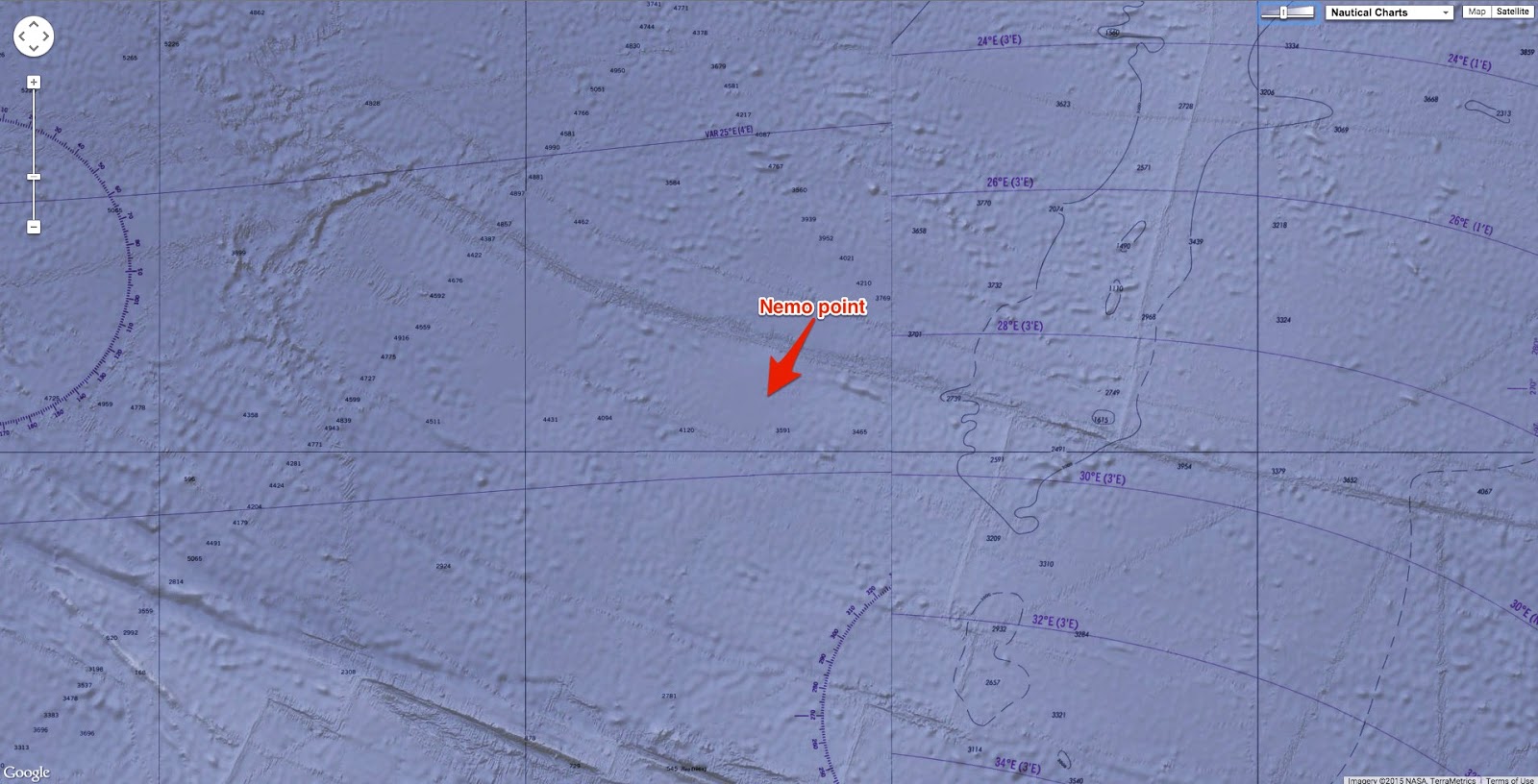 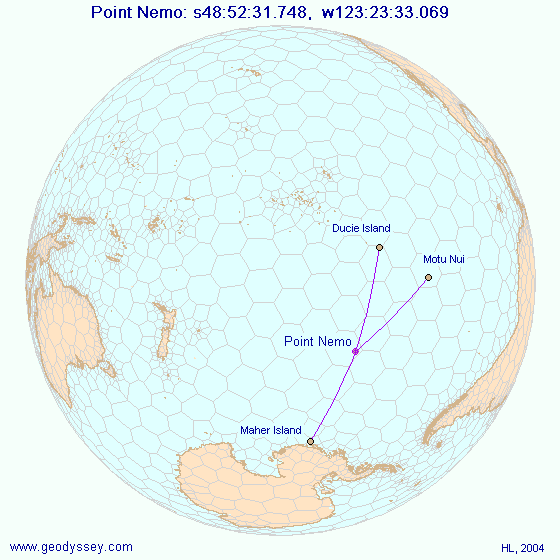 It lies in the South Pacific Ocean, 2,688 km (1,670 mi) from the nearest lands: Ducie Island (part of the Pitcairn Islands) in the north, Motu Nui (part of the Easter Islands) in the northeast, and Maher Island (near the larger Siple Island, off the coast of Marie Byrd Land, Antarctica) in the south. Chatham Island lies farther west, and Southern Chile in the east.
- see Wikipedia Pole of inaccessibility - 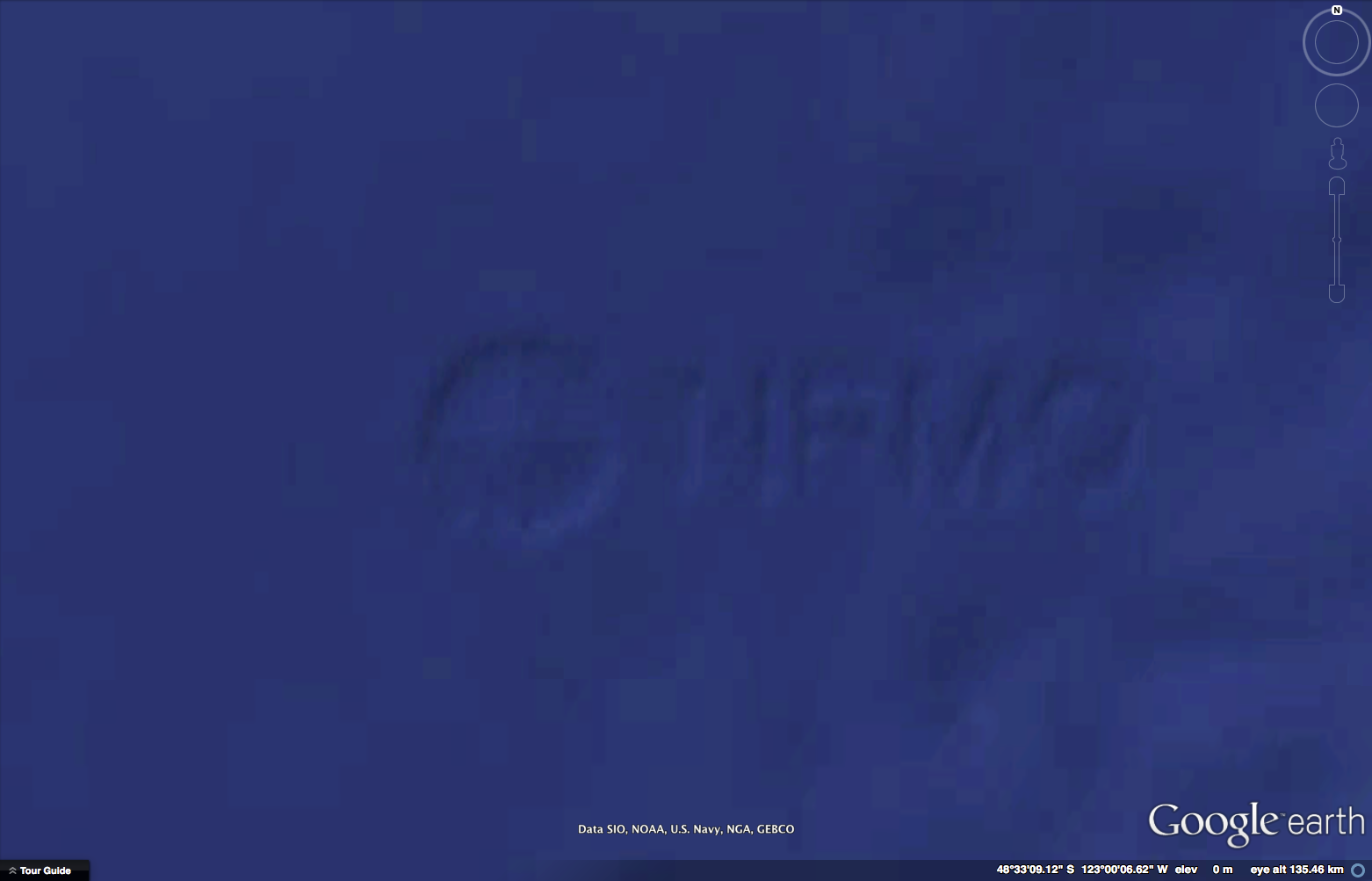 zoom on Nemo Point watermarked on Google Earth
On Google Earth, a circle with the text "NEMO" printed next to it,
slightly darkened on the actual map itself, can be seen at this point.

By the way, in the The Mysterious Island (L'Île mystérieuse in French) another novel by Jules Verne, there is a reference to a "Lincoln Island", unknown (and fictitious) island also located in the Pacific no and so far (about 1500 Nm) NW from the Nemo Point at 34°57′S 150°30′W