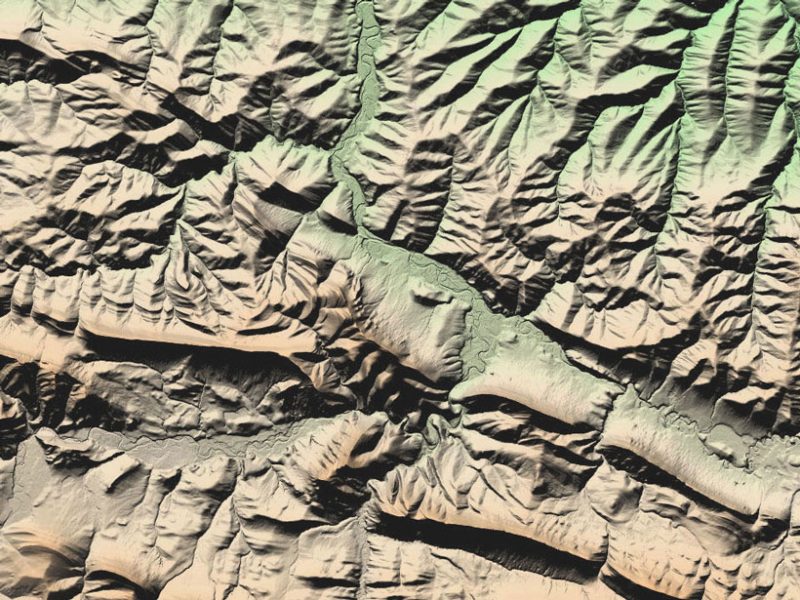 A color-shaded relief image made from the 5-meter mosaic of ArcticDEM shows a portion of the Brooks Range on the North Slope of Alaska.
Colors suggest elevation, from lower (green) to higher (brown).
Credit: Paul Morin, PGC

From EOS by Randy Showstack

Researchers highlight the value of the time element incorporated into imagery and having a baseline for revisiting and comparing topography.

“The Arctic, before we started, was one of the most poorly mapped places on Earth.
It’s not anymore,” said Paul Morin, co–principal investigator of the ArcticDEM initiative, which has now released high-resolution digital elevation models (DEM) of 97.4% of the region.
With this latest release, “we have a uniform product at 2-meter [resolution]” for all the land area north of 60°N latitude, plus those parts of Alaska, Greenland, and Russia’s Kamchatka Peninsula that are south of that point.

The public-private initiative plans to fill in the gaps with a final release in May 2018, according to Morin, director of the Polar Geospatial Center (PGC) at the University of Minnesota.

The initiative, which has produced a 3-D digital representation of terrain surface, is an important tool for studying, understanding, and making decisions about the Arctic, including resources, natural hazards, and infrastructure, scientists and environmental managers told Eos. It is “a game changer for high-latitude science and modeling,” said Laurence Smith, professor of geography at the University of California, Los Angeles.

Released on 6 September, the publicly available ArcticDEM incorporates satellite-acquired imagery, high-performance computing, and open-source photogrammetry software to stitch together a terrain model that governments, commercial entities, and the academic community could find useful for many applications.

The ArcticDEM release consists of two products, Morin told Eos. One is a time-stamped, 2-meter-resolution collection of overlapping DEMs of the Arctic, with each DEM having the date and time associated with it.
The other is a 5-meter-resolution DEM product, which is not time stamped, of the entire region.
The products build on earlier ArcticDEM versions by adding 32% more terrain data, including sizable portions of Russia and Scandinavia.

(top) The newly released Arctic digital elevation model, or DEM, depicts 97.4% of the region’s terrain.
Colors show elevation: green for near sea level, brown for higher topography such as mountains, and white for the highest-altitude areas, such as the Greenland ice sheet.
(bottom) A silhouette of the full ArcticDEM shows the 32% additional Arctic terrain (orange) included in the DEM since its last release.
Credit: Paul Morin, PGC

The products provide two significant advances, according to Morin.
The first is that the resolution for just about the entire Arctic is much higher than in other models.
For instance, compared with the U.S.-Japanese Advanced Spaceborne Thermal Emission and Reflection Radiometer’s (ASTER) Global Digital Elevation Model (GDEM), which came out with updated versions in 2011 and 2016, the 5-meter ArcticDEM has 36 times the resolution of ASTER’s GDEM, which has 30-meter pixels, whereas the 2-meter ArcticDEM has 225 times greater resolution. 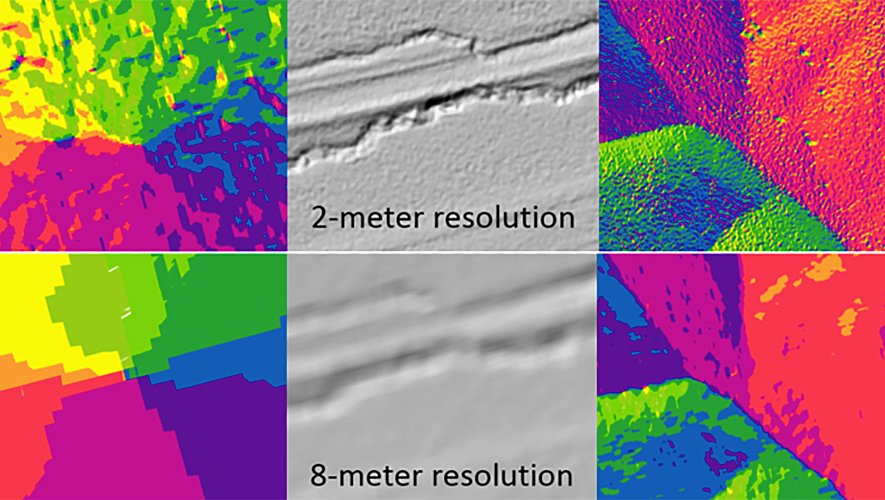 Scientists are using data of the Lena Delta at the end of a remote river in Siberia
to study river systems that are otherwise inaccessible.
see on ArcticDEM explorer

“Probably the biggest leap forward here for science is that we’ve proven that topography can be produced continuously,” Morin said.
This means that whenever the Sun is at least 7° above the horizon, satellites are gathering stereo imagery that then gets processed and released in short order, he explained. Every year, about 75% of the entire Arctic gets reimaged, he said.
For some high-priority areas, such as outlet glaciers in Greenland, the reimaging happens more frequently.
Satellites collect each stereo image as a pair of mono images taken at specific, known angles.

Previous DEM production projects were “one-offs,” Morin noted.
A large mapping effort would produce a DEM of a region like Alaska with the intention of not repeating the mapping for an extended period of time, he noted.

Ragnar Heidar Thrastarson, geographic information system coordinator for the Icelandic Meteorological Office, said, “Previously, we thought of DEMs as a fixed spatial entity that needed to be collected once and then maybe again in 20 years or so. But there are a lot of natural phenomena that change faster than that,” he told Eos.

The new temporal aspect of ArcticDEM “is a huge benefit” for modeling those and following changes in glaciated areas, he said.

A time series (left to right) of images of the West Branch of the Columbia Glacier in Alaska, showing the glacier’s retreat from 2010 to 2015.
Credit: Paul Morin, PGC

The U.S. National Geospatial-Intelligence Agency (NGA) and the National Science Foundation (NSF) have supported the initiative, which grew out of a January 2015 executive order from then president Barack Obama. The four satellites used for collecting imagery—Worldview-1, -2, and -3 as well as GeoEye-1—are all owned by DigitalGlobe and licensed by NGA, which provides the imagery for the initiative.

NSF is providing $2.5 million through its Directorate for Geosciences. In addition, the NSF-funded Blue Waters petascale supercomputer at the National Center for Supercomputing Applications at the University of Illinois at Urbana-Champaign processes the stereo imagery into elevation models. The products, which are produced on a supercomputer, are distributed through arcticdem.org and are also available through Amazon Web Services.

The project also has involved other academic partners and Esri, a mapping company based in Redlands, Calif., that developed an online application, ArcticDEM Explorer, to analyze data. 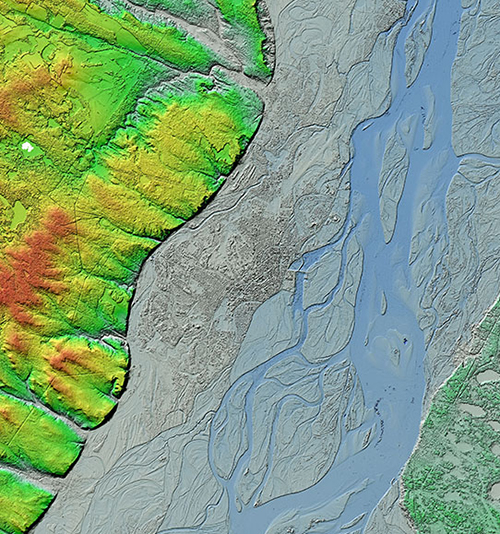 Visible as a darker gray region in the center of this image made from ArcticDEM, the remote Siberian city of Yakutsk stretches between wilderness (green, yellow, and orange areas to the left) and the Lena River (blue) in northern Russia.
Credit: Paul Morin, PGC

An Important Tool for Arctic Science and Modeling Hazards

Scientists and environmental managers told Eos that ArcticDEM is an important tool for Arctic science and other applications.
“It’s a tremendous baseline of information for basic research related to land surface processes,” said Scott Borg, acting deputy assistant director for geosciences at NSF.

Eric Rignot of the University of California, Irvine, and NASA’s Jet Propulsion Laboratory in Pasadena, Calif., told Eos that he will use ArcticDEM to process ice velocity on glaciers and ice sheets and said it will also help clarify drainage boundaries between glaciers.
It “will finally provide a useful reference in time from which we can measure changes in ice volume,” he said.

The Asiaq Greenland Survey used ArcticDEM to make a detailed topographic map and a tsunami model after an 18 June landslide and tsunami at Karrat Fjord.
One motivation was “to look for other areas in the same region that could fail in the same way,” Morin said.

“Earth science is about change,” he noted.
“The surface is key to the past, and being able to measure changes in the surface is going to enable all different kinds of science, from coastal erosion and landslides, to forest management and civil engineering. Because we now have created a baseline for topography for about 10% of the land surface of the Earth, measurements in the future of topography can be measured against this data set.”