The sticker informed the bridge crew that the equipment could not be used for navigation because the
chart system used ARCS.
During the investigation, it was not possible to establish why the chart was to be used only for training and not during the everyday navigation of the ship.
VICTORIA met the mandatory requirement to carry nautical charts and nautical publications in order to plan and display the ship’s route for the intended voyage and to plot and monitor positions throughout the voyage.
However, from a SOLAS regulatory standpoint, that requirement did not prevent supplementary use
of an ECS with ARCS to navigate the ship.
Apart from the formal intended use of the ECS, there is the question of the ECS’ actual use in the everyday navigation of the ship.

On February 10 this year, the Portuguese-flagged container ship Victoria went aground at the entrance to the deepwater channel Lillegrund, Denmark.
Though the bridge crew were aware of the shallow waters ahead, they were caught by surprise when the grounding occurred as their attention was focused on the turn into the channel. 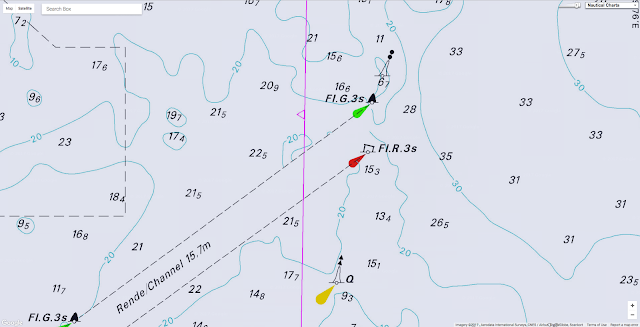 Deepwater channel at Lillegrund with the GeoGarage platform (DGA chart)
The grounding of VICTORIA on 10 February 2017 occurred as a result of a combination of factors  which led the bridge crew to navigate by the buoys and not the sea charts and the ECS
Thereby the bridge crew did not recognise the presence of the shallow waters ahead
The planned approach to the deepwater channel at Lillegrund was instrumental in bringing the bridge crew in a situation where the priority was, first and foremost, to navigate visually by means of the buoys rather than the paper charts and the ECS

The grounding resulted in serious damage to the ship’s hull and several fuel oil tanks and ballast tanks were ruptured resulting in a minor pollution of the environment.
The Danish Maritime Accident Investigation Board (DMAIB) initiated an investigation of the accident and found that the bridge team's priority was, first and foremost, to navigate visually by means of the buoys rather than the paper charts and the electronic chart system (ECS).

The position of the isolated danger mark did not warn the crew about the immediate danger of the shallow waters ahead because it was positioned in such a way that it did not direct the ship away from the shallow water area. 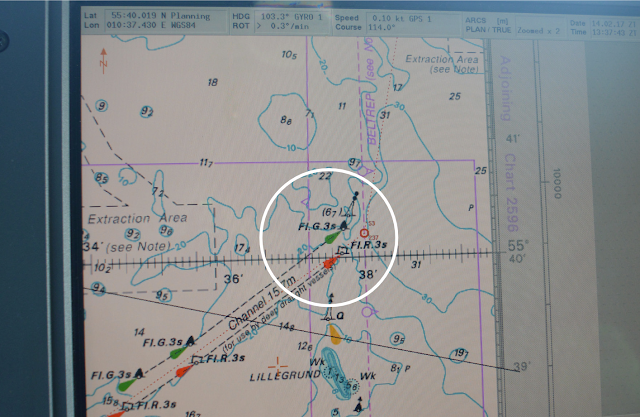 Photo of ECS screen showing the deepwater channel at Lillegrund.
The position of the isolated danger mark did not warn the crew about the immediate danger of the shallow waters ahead because it was positioned on the shallow water area and thereby did not direct
the ship east to avoid the areaTherefore, when the grounding occurred, the crew were caught by surprise and initially did not comprehend what had happened.
Source: Victoria/DMAIB

During the investigation, it was not possible to establish the intended purpose of the ECS.
According to the bridge crew, it was not common to use the ECS when navigating because it was not approved and there was a sticker on the monitor highlighting that it was “ARCS CHARTS FOR TRAINING ONLY.”
During the investigation, the bridge crew continuously referred to the sticker when asked about the use of the ECS.
However, there were some indications that the ECS was to some extent used in daily navigation: It was normally turned on and the ship’s route was loaded into the system, and the ECS was positioned in front of the officer of the watch providing a continuous overview of the ship’s position.

An investigation of the paper charts showed that the fixed positions were only sporadically marked in the paper chart, which indicated that the navigational officers primarily used other means of determining the position of the ship, including the ECS.
The investigators concluded that the accident illustrates that navigating a ship is a complex interaction between different tasks, e.g. using a passage plan that someone else has made, collision avoidance, fixing the position of the ship, maneuvering, interacting with other crew members, talking to the VTS and getting the ship to its destination on time, etc.
As the bridge crew cannot be equally focused on each task simultaneously, a prioritization of tasks will take place.
That prioritization is necessary for the bridge crew to make effective task-specific decisions, but can also lead to other information not being recognized.

The marine accident report is available here.
Posted by geogarage at 5:13 PM