The Larsen C Iceberg is on the brink of breaking off 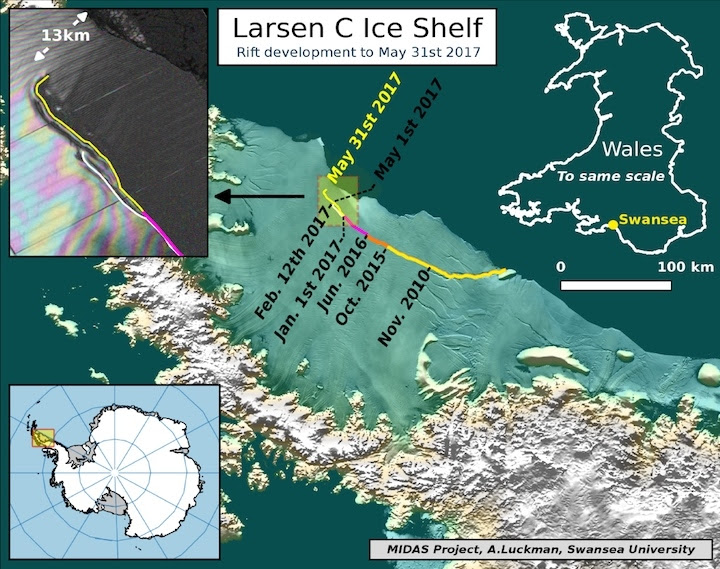 The current location of the rift on Larsen C, as of May 31 2017.
Credit: Project MIDAS

The saga of the Larsen C crack is about reach its stunning conclusion.
Scientists have watched a rift grow along one of Antarctica’s ice shelves for years.
Now it’s in the final days of cutting off a piece of ice that will be one of the largest icebergs ever recorded.
It’s the latest dreary news from the icy underbelly of the planet, which has seen warm air and water reshape the landscape in profound ways.

The crack has spread 17 miles over the past six days, marking the biggest leap since January.
It’s also turned toward where the ice shelf ends and is within eight miles of making a clean break.
There’s not much standing in its way either.
“The rift has now fully breached the zone of soft ‘suture’ ice originating at the Cole Peninsula and there appears to be very little to prevent the iceberg from breaking away completely,” scientists monitoring the ice with Project MIDAS wrote on their blog.


British Antarctic Survey (BAS) recently captured this video footage of a huge crack in the Larsen C Ice Shelf, on the Antarctic Peninsula.
Currently a huge iceberg, roughly the size of Norfolk, looks set to break off Larsen C Ice Shelf, which is more than twice the size of Wales.
Satellite observations from February 2017 show a growing crack in the ice shelf which suggests that an iceberg with an area of more than 5,000 km² is likely to calve soon.
Researchers from the UK-based MIDAS project, led by Swansea University, have reported several rapid elongations of the crack in recent years.
BAS scientists are involved in a long-running research programme to monitor ice shelves to understand the causes and implications of the rapid changes observed in the region.
They shot this footage as they flew over the ice shelf on their way to collect science equipment.
During the current Antarctic field season, a glaciology research team has been on Larsen C using seismic techniques to survey the seafloor beneath the ice shelf.
Because a break up looks likely the team did not set up camp on the ice as usual.
Instead they made one-off trips by twin otter aircraft supported from the UK’s Rothera Research Station.
Ice shelves in normal situations produce an iceberg every few decades.
There is not enough information to know whether the expected calving event on Larsen C is an effect of climate change or not, although there is good scientific evidence that climate change has caused thinning of the ice shelf.
Once the iceberg has calved, the big question is whether Larsen C will start to retreat.

The growth follows reports from early May that the crack across the ice shelf had sprouted a branch, further underscoring how unstable the ice is becoming.
Ice shelves float over water and essentially act as doorstops that hold back the vast Antarctic ice sheet.
The breakup is sure to be a spectacle both awe-inducing and horrifying.
The iceberg on the verge of splitting off is estimated to be the size of Delaware, covering an area of 1,930 square miles.
That’s equal to 10 percent of the ice shelf’s total area.

Once it breaks off, scientists are concerned that the rest of ice shelf could collapse afterwards, a fate that befell Larsen A in 1995 and Larsen B in 2002.
In Larsen B’s case, the ice shelf collapsed in the span of a month following an influx of mild air. 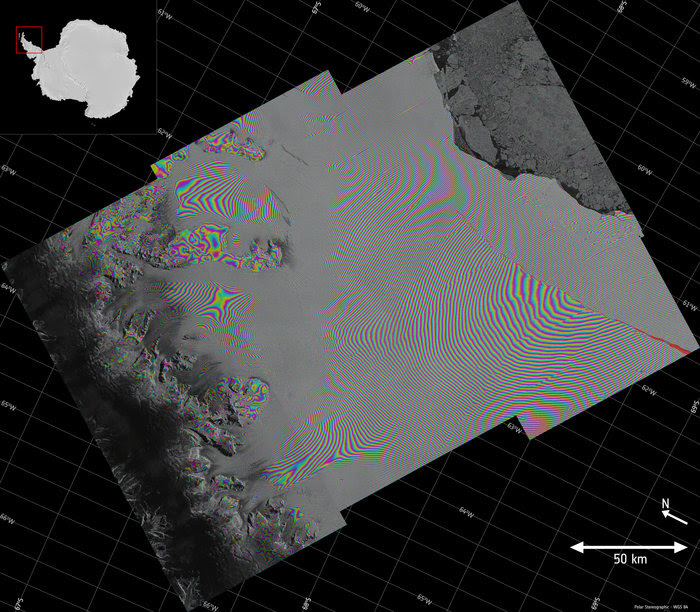 Larsen-C crack interferogram
Two Sentinel-1 radar images from 7 and 14 April 2017 were combined to create this interferogram showing the growing crack in Antarctica’s Larsen-C ice shelf.
Polar scientist Anna Hogg said: “We can measure the iceberg crack propagation much more accurately when using the precise surface deformation information from an interferogram like this, rather than the amplitude – or black and white – image alone where the crack may not always be visible.”
When the ice shelf calves this iceberg it will be one of the largest ever recorded – but exactly how long this will take is difficult to predict.
The sensitivity of ice shelves to climate change has already been observed on the neighbouring Larsen-A and Larsen-B ice shelves, both of which collapsed in 1995 and 2002, respectively.
These ice shelves are important because they act as buttresses, holding back the ice that flows towards the sea.
The Copernicus Sentinel-1 two-satellite constellation is indispensable for discovering and monitoring events like these because it delivers radar images every six days, even when Antarctica is shrouded in darkness for several months of the year.

In February, the New York Times reported that when the iceberg breaks off, it will weaken or destroy two key areas where ice overlaps islands.
Those areas help keep the ice shelf from falling apart. Losing them could dramatically reduce the remaining ice shelf’s stability.
Larsen C is substantially larger than its former neighbors Larsen A and B, and its loss would be a huge blow to ice on the Antarctic Peninsula.

The changes don’t just stop with the Larsen C crack or the Antarctic Peninsula in general.
The vast majority of ice shelves are losing volume due to rising ocean and air temperatures.
That’s helped prime parts of West Antarctica for what might be unstoppable melt that could raise sea levels at least 10 feet.

Researchers also recently found meltwater ponds are much more common than previously thought. They even discovered a roaring seasonal waterfall on the Nansen Ice Shelf.

These and other findings make clear that the Larsen C crack is just one of many changes happening to Antarctica.
Global warming has pushed temperatures up to 5°F higher in the region since the 1950s and they could increase up to 7°F further by the end of the century, putting more stress on ice.

Though the changes are happening in the most remote part of the planet, they’re being felt thousands of miles away as ice turns to water and starts to lap against increasingly beleaguered coastal communities around the world.
And the impacts will only grow more severe unless carbon pollution is reined in.