To unravel this incredible history, scientists use a range of different techniques to determine when and where continents moved, how life evolved, how climate changed over time, when our oceans rose and fell, and how land was shaped.
Tectonic plates – the huge, constantly moving slabs of rock that make up the outermost layer of the Earth, the crust – are central to all these studies.

The time range is crucial.
It’s a period when the Earth went through the most extreme climate swings known, from “Snowball Earth” icy extremes to super-hot greenhouse conditions, when the atmosphere got a major injection of oxygen and when multicellular life appeared and exploded in diversity.

Now with this first global map of plate tectonics through this period, we (and others) can start to assess the role of plate tectonic processes on other Earth systems and even address how movement of structures deep in our Earth may have varied over a billion year cycle.

The Earth moves under our feet 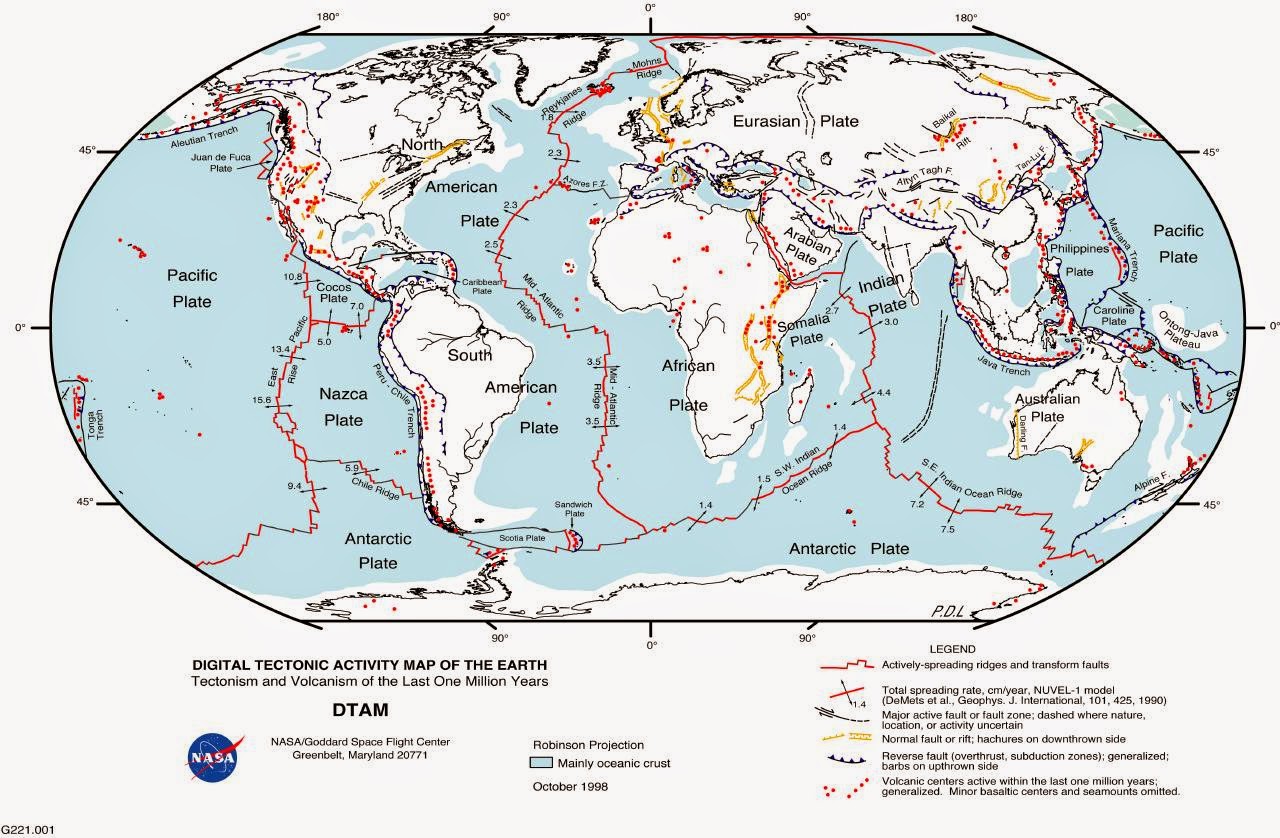 Modern plate tectonic boundaries.But how do we map the Earth like this in the past?
NASA's Earth Observatory

In the modern Earth, global positioning satellites are used to map how the Earth changes and moves.
We know that up-welling plumes of hot rock from over 2,500 km deep in the planet’s mantle (the layer beneath the Earth’s crust) hit the solid carapace of the planet (the crust and the top part of the mantle).
This forces rigid surface tectonic plates to move at the tempo of a fingernail’s growth.

On the other side of the up-welling hot rock plumes are areas known as subduction zones, where vast regions of the ocean floor plunge down into the deep Earth.
Eventually these down-going oceanic plates hit the boundary between the core and mantle layers of Earth, about 2,900 km down.
They come together, forming thermal or chemical accumulations that eventually source these up-welling zones.

It’s fascinating stuff, but these processes also create problems for scientists trying to look back in time.
The planet can only be directly mapped over its last 200 million years.
Before that, back over the preceding four billion years, the majority of the planet’s surface is missing, as all the crust that lay under the oceans has been destroyed through subduction.
Oceanic crust just doesn’t last: it’s constantly being pulled back deep into the Earth, where it’s inaccessible to science.


This animation shows the plate tectonic evolution of the Earth from the time of Pangea, 240 million years ago, to the formation of Pangea Proxima, 250 million years in the future.
The animation starts with the modern world then winds it way back to 240 million years ago (Triassic).
The animation then reverses direction, allowing us to see how Pangea rifted apart to form the modern continents and ocean basins.
When the animation arrives back at the present-day, it continues for another 250 million years until the formation of the next Pangea, "Pangea Proxima".
Notice how the areas of green (land), brown (mountains), dark blue (deep sea), and light blue (shallow seas on continents), changes throughout time.
These changes are the result of mountain-building, erosion, and the rise and fall of sea level throughout time.
The white patches near the pole are the expanding and contracting polar icecaps.

Mapping the Earth in deep time

So what did we do to map the Earth in deep time?
To get at where plate margins were and how they changed, we looked for proxies – or alternative representations – of plate margins in the geological record.

We found rocks that formed above subduction zones, in continental collisions, or in the fissures where plates ripped apart.
Our data came from rocks found in locations including Madagascar, Ethiopia and far west Brazil.
The new map and associated work is the result of a couple of decades of work by many excellent PhD students and colleagues from all over the world.

We now have more details, and a view to way further back in geological time, than were previously available for those studying the Earth.

Using other methods, the latitudes of continents in the past can be worked out, as some iron-bearing rocks freeze the magnetic field in them as they form.
This is like a fossil compass, with the needle pointing into the ground at an angle related to the latitude where it formed — near the equator the magnetic field is roughly parallel to the Earth’s surface, at the poles it plunges directly down.
You can see this today if you buy a compass in Australia and take it to Canada: the compass won’t work very well, as the needle will want to point down into the Earth.
Compass needles are always balanced to remain broadly horizontal in the region that they are designed to work in.

But, these so-called “palaeomagnetic” measurements are hard to do, and it is not easy finding rocks that preserve these records.
Also, they only tell us about the continents and not about plate margins or the oceans.


The cool, rigid, outer layer of the earth, the lithosphere,
is broken into massive plates along discrete boundaries.
What are these plates, and what do the boundaries represent?

The lack of ancient tectonic maps has posed quite a problem for how we understand our Earth.

Tectonic plates influence many processes on Earth, including the climate, the biosphere (the sphere of life on the outer part of the planet), and the hydrosphere (the water cycle and how it circulates around the planet and how its chemistry varies).

By simply redistributing tectonic plates, and thereby moving the positions (the latitudes and longitudes) of continents and oceans, controls are placed on where different plants and animals can live and migrate.

For example, water in the deep oceans was often not at the surface for many many thousands of years, and has different composition from the water presently on the ocean’s surface.
This is important because different water masses contain different amounts of nutrients, redistributing them to different parts of the Earth, changing the potential for life in different places.

Tectonic plates also influence how much of the Sun’s radiation gets reflected back out to space, changing the Earth’s temperature.

How fast tectonic plates move have also varied over time.
At different periods in Earth history there were more mid-ocean volcanoes than there are today, creating water movement such as pushing up ocean waters over the continents.
At these times, some types of volcanic eruptions were more frequent, pumping more gas into the atmosphere.

Mountain ranges form as tectonic plates collide, which affect oceanic and atmospheric currents as well as exposing rocks to be eroded.
This locks up greenhouse gases, and releases nutrients into the ocean.

Understand ancient plate tectonics and we go someway to understanding the ancient Earth system. And the Earth as it is today, and into the future.