The RNZN vessel HMNZS Otago sailing through a storm in the Southern Ocean.
20m swells with 80KMph winds.


From NZ Herald by Jamie Morton

A Kiwi company expects to record some of the largest waves ever known - potentially reaching up to the height of an eight-storey building - after just deploying a wave buoy in the thick of the world's wildest ocean.
In a collaboration with the New Zealand Defence Force, science-based consultancy Metocean Solutions recently moored the high-tech instrument in the Southern Ocean off Campbell Island, nearly halfway between the South Island and Antarctica.
Persistent westerly winds and an unlimited area for waves to build combined to make Southern Ocean waves among the biggest in the world.
But because subantarctic waters were difficult to work in, reliable wave data for the area had been scarce.
Managing director Peter McComb said the moored buoy - the southernmost ever deployed - was designed strong enough to survive a monster wave with a height of 25m.
"And indeed, that's what we are hoping to measure if we get a big storm coming through."

The buoy, fixed in 150m of water, has already registered waves as high as 16m - taller than huge waves that were detected off the Bay of Plenty during Cyclone Cook.
However, this was still well short of the largest on the books: a 19m wave recorded rolling in the North Atlantic Ocean between Iceland and the UK last year.
"Anecdotally, we know that individual waves of 25m height can occur in this area; it might have to be out there many years before it could capture one, but we are hopeful."
By comparison, 25m is the height of 16 cars stacked on top of each other, or an eight-storey building. The wave buoy is lowered into the Southern Ocean off Navy vessel HMNZS Otago.
Photo / Supplied

It's also half the draught (vertical distance between waterline and bottom of hull) of an ultra large container vessel, and nearly half the distance between the waterline and the deck of cruise liner Oasis of the Seas.
McComb said these beasts tended to come not as a single wave rolling across the ocean, but one that emerges from a combination of different wave forms amid a heavy storm.
"You'd likely have a big trough occurring at the same time a large crest comes through - and having been at sea in big storms myself, it's a little bit like a big hole suddenly opening up in front of you. 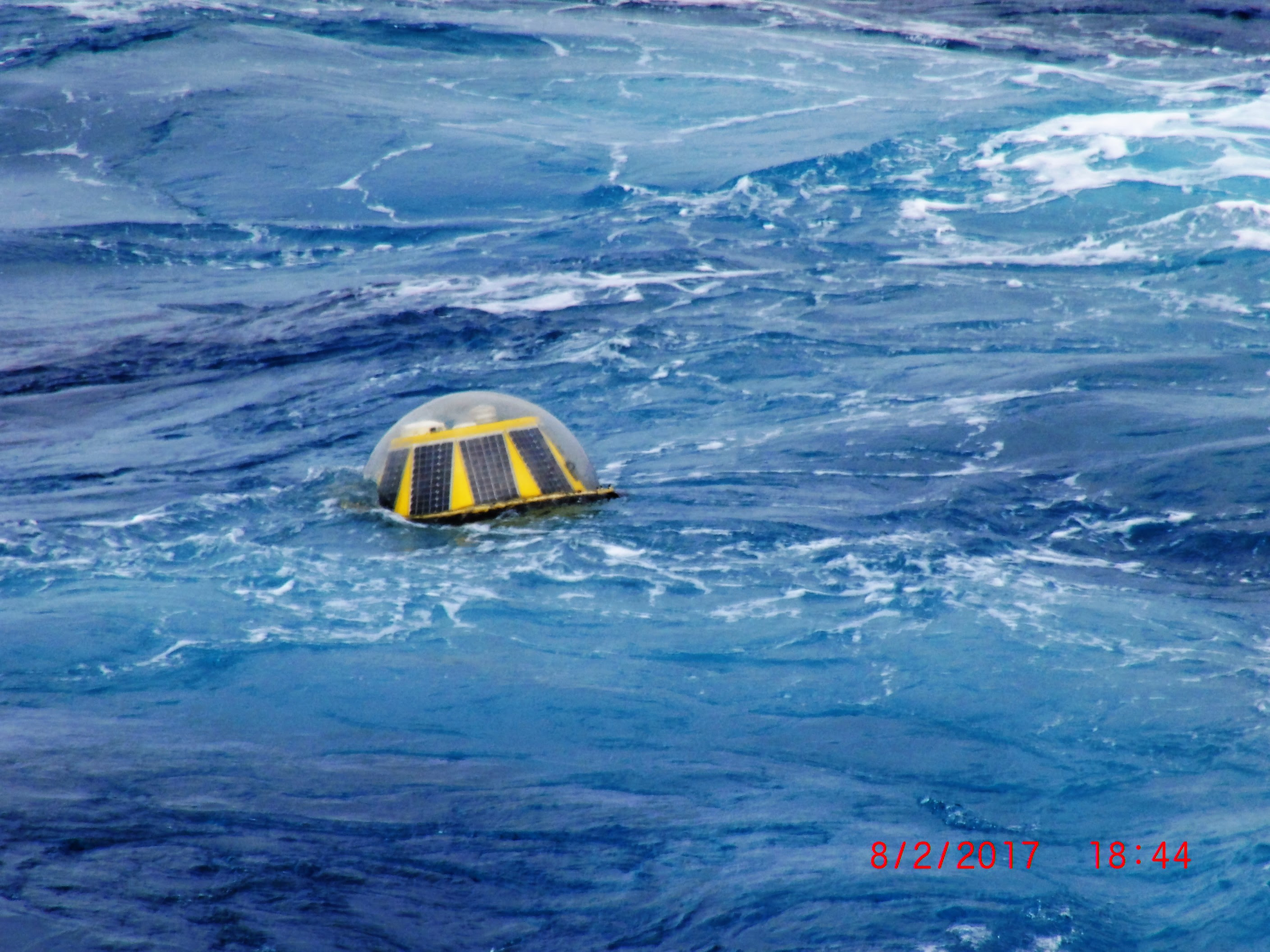 The buoy sits moored in 150m of water near Auckland Island.

"You don't always get the sense of an exceptionally large crest, but you do get one a large hole forming, and that's just terrifying."
Understanding more about how big waves in the Southern Ocean was crucial to improving the design of vessels that operate in that part of the world.
Ships tended to negotiate heavy seas by sailing head-on into the direction the waves were coming from - but, particularly in the Southern Ocean, this could prove challenging when vessels faced long, large swells from one side and shorter, steeper seas from another.

The buoy has been deployed roughly halfway between New Zealand and Antarctica.

Ships plying the ocean ranged from icebreakers and research boats to fishing vessels and small cruise liners.
"Of particular interest to our company is the next generation of Navy ships; we have a search and rescue responsibility that goes all the way to the ice, so, as a nation, it's on our patch and it's of interest to the Navy to understand that as well."
The buoy's open access data feed further had much wider benefits to the world's ocean science community, providing crucial information to improve forecasting and climate models.
"Currently, the models perform the worst in the Southern Ocean, so it's of fundamental importance to collect the data and then feed that new understanding of the physics back into the science."
It comes alongside separate plans for a multi-million dollar research station on subantarctic Auckland Island, which would allow scientists to study deep-sea currents in latitudes where projected changes in climate are expected to be seen most rapidly. Meanwhile, Kiwi scientists are attempting to better understand fearsome "rogue" waves with fibre-optic experiments in an Auckland lab.
Appearing from nowhere, or at least amid a series of ordinary waves, these monsters have the mass and power to sink ships.
Rogue waves were once thought to be mythical, but satellite surveys have now confirmed the dreaded reality.
More recently, physicists have been studying their properties by studying waves of light, which similarly conform to physical laws.
"In the ocean, some rogue waves come at twice the height of what's called significant wave height: so, in a system where you normally get one-metre waves, all of a sudden you get a four-metre wave," explained Professor Neil Broderick of the University of Auckland.
"So it just comes from out of the blue and disappears again: and in fibre lasers, and in optics, you can often see the same thing."
In a Marsden Fund-supported study, his team has been investigating the behaviour of light pulses to understand the origins of rogue flashes.
Because pulses of light propagating along a fibre-optic cable are easier to control and quicker to study than waves of water, fibre-based lasers have become a major focus of current research into oceanic waves.
And by better understanding rogue waves, Broderick and his team have also been seeking how to prevent destructive laser bursts that can fry fibre-optic systems, while also feeding the new insights into oceanographic research and ship design.
"We also want to know how they form, because, if we can control them, then we can get a high-intensity pulse that lets us do things we currently can't do with low-intensity pulses.
"So the aim has been to try to make these things on demand, and then see what sort of applications they have."