From NYTimes by Jugal K. Patel and Henry Fountain

As global warming melts sea ice across the Arctic, shipping routes once thought impossible — including directly over the North Pole — may open up by midcentury.
But high costs may keep the new routes from being used right away.


On March 7, 2017, Arctic sea ice reached its annual wintertime maximum extent, according to scientists at the NASA-supported National Snow and Ice Data Center (NSIDC) and NASA.
The Arctic sea ice extent set a record low after a warm winter.
Combining the Arctic and Antarctic numbers shows that the planet’s global sea ice levels on Feb. 13 were at their lowest point since satellites began to continuously measure sea ice in 1979.

The amount of sea ice covering the Arctic Ocean has declined sharply each decade since the 1980s, according to measurements taken each September when the ice is at its minimum.
Older, thicker ice is disappearing as well.
Scientists say global warming is largely responsible for the changes.
Parts of the Arctic are warming twice as fast as elsewhere.

The changing conditions offer an opening to shipping companies.
The Arctic is potentially a faster, more direct route between Asia and ports in Europe and eastern North America.
Currently there is relatively little cargo shipped through the region.
Although shipping will increase over the next decade, especially as Russia develops oil and gas fields in Siberia, total Arctic cargo tonnage is expected to remain only a small fraction of the amount carried along southern routes through the Suez and Panama canals.
But with “middle of the road” warming — higher than the 2015 Paris accord target but lower than the most extreme climate change forecasts — more Arctic shipping routes could open, both for ordinary ships and those that are built to move through thicker ice.

Even direct over-the-pole routes would potentially be navigable, at least during some part of the summer-fall shipping season.
“We know what is likely to happen to sea ice,” said Nathanael Melia, one of the researchers at the University of Reading in Britain who calculated how the routes might change as warming continues to the middle of the century.
“It will reduce decade on decade, and open up vast swaths of the Arctic Ocean.”
As Arctic routes become more direct, voyage times could fall to less than three weeks in some cases, making Arctic shipping potentially more attractive than the southern routes in coming decades, Dr. Melia’s research shows. 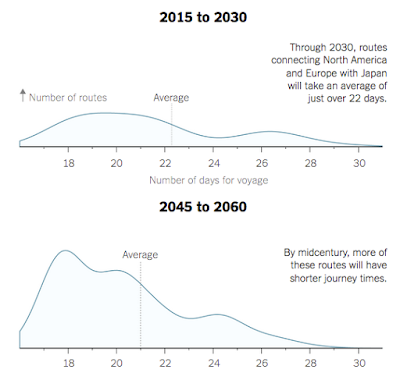 Just because shippers could make greater use of Arctic routes does not necessarily mean they will.
Ice conditions will still vary greatly from year to year, which would discourage shipping companies for which precise timing of shipments is crucial.
Other costs including higher insurance rates, as well as safety considerations, may deter other efforts. A report last year by Copenhagen Business School concluded that trans-Arctic shipping by ordinary vessels between Europe and Asia was unlikely to become economically viable before 2040.