Storm force - Scotland experiences the highest seas in the world 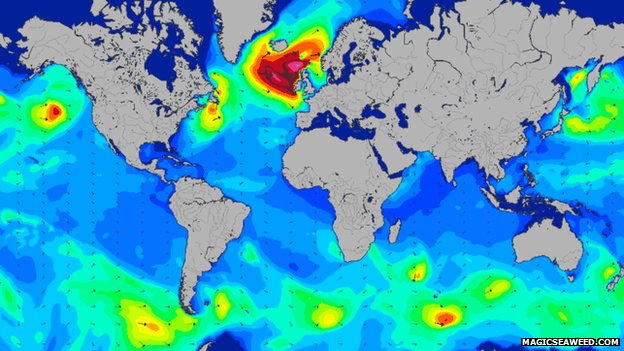 Scotland and Ireland experienced the highest seas anywhere in the world earlier this week, according to swell models.
But what is a swell model and how do they work?

Far off the Western Isles in the North Atlantic a buoy called K5 gathers data on the movement of the sea.

situation for the 4th of February

The information is monitored by the National Oceanic and Atmospheric Administration and other organisations such as the Met Office.
The data is also among resources surfers' website Magicseaweed.com in Kingsbridge, South Devon, uses to create swell models - forecasts of wave sizes out to sea and their size close to shore.

On Monday, K5 - also known as station 64045 - was relaying some big numbers.
Wave heights of 14.3m (46.90ft) were recorded during Monday to create the highest seas anywhere in the world on that day, according to Magicseaweed.com's modelling.
Significant conditions continued on into Tuesday.

Forecaster Ben Freeston said:
"It's been an active winter in the Northern Atlantic with several large storms already.
"Typically a swell in this sort of size range occurs about once per winter approaching Scotland, which is uniquely placed globally for such an event.
"The storm of 4 February pushed waves averaging almost 47ft past a wave buoy some 200 miles west of the coast of Scotland with waves of an average 30ft recorded on the lee side of the Shetlands.
"While this is extremely large by any standard it's not actually unusual in range for Scotland in the winter." 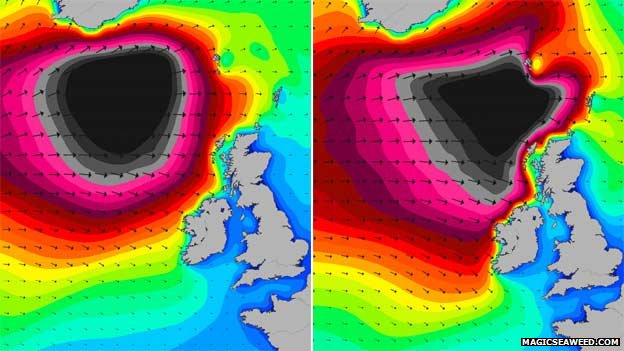 As well K5, Magicseaweed draws on other meteorological information that is being shared across the world by trained observers and air and sea traffic and being sent from automated weather stations and satellites.

Mr Freeston said:
"At Magicseaweed we use a long range numeric modelling system to predict and track these storms and the swells and surf they create.
"As a big storm like this starts to appear in our system - sometimes almost a fortnight in advance - we'll talk simultaneously to big wave surfers and surf contest organisers in Ireland, France, Spain and Portugal who are attempting to ensure they can find the right location at the right time for the largest possible waves and best possible wind conditions." Water mountain: Coastal areas including this harbour on the North Sea are likely to suffer the most today

But the prime conditions surfers are seeking begin as something to be avoided, storms in northern and southern latitudes where cold polar air meets warmer tropical air.

Mr Freeston said that for "truly extreme" wave conditions in the Northern Hemisphere there were just two key regions: Scotland/Ireland and Alaska/Western Canada.
He said: "By comparison an Alaskan wave buoy at a similar latitude tops out over the same period at a maximum significant height of just 33ft. A height exceeded almost every winter in Scotland."

Among the chief reasons for this, he added, was a phenomena known as the Greenland Tip Jet.
The forecaster said that as storms pass to the north of Greenland the large, prominent land mass acts almost like an aircraft wing, creating an area of higher speed winds flowing to the east around the tip. This wind pattern builds energy into swells and points itself directly at Scotland.

Mr Freeston said: "Despite these enormous waves the issue for surfing in Scotland or Ireland is that the same storms that create these colossal swells tend to march over the land as the waves arrive, so a typical swell is accompanied by extremely strong winds that make surfing dangerous or impossible in all but the most sheltered locations.
"For this reason it's probably accurate to say that Scotland has some of the largest waves on Earth - but is far less likely to see them ridden at this size than other locations a little further removed from the storm's path." Rubble: Scottish islanders are cleaning up after the 'storm of a lifetime' saw 80ft waves destroy lighthouse sea defense walls which had stood for 122 years on Fair Isle, off the north coast

Dave Wheeler, a photographer and local weather forecaster on Fair Isle, in Shetland, was monitoring Monday's swell charts.
He said the high seas were among the worst in living memory on the remote island.
Waves presented as bright colours on the charts caused actual damage on Fair Isle, with the sea smashing a wall at the 120-year-old South Lighthouse and washing the debris several hundred metres inland.
Mr Wheeler said: "No-one can remember damage to this extent at the lighthouse.
"Monday's sea conditions have been described as phenomenal."