The Arctic is a key area of global climate change, with warming rates exceeding twice the global average


It is being billed as the biggest single Arctic research expedition ever planned.
Germany is going to sail its 120m-long research vessel, the Polarstern, into the sea-ice at the top of the world and just let it get stuck so it can drift across the north pole.
The 2,500km (1,550-mile) trip, to begin in 2019, is likely to take a year.
Researchers hope to gather valuable new insights on the region where Earth's climate is changing fastest.

Last month the extent of Arctic sea-ice was the lowest ever recorded for a January (during the satellite era), with temperatures several degrees above the long-term average.
Prof Markus Rex will lead the so-called MOSAiC project:
"The decline of Arctic sea-ice is much faster than the climate models can reproduce and we need better climate models to make better predictions for the future.
"There is a potential that in a few decades the Arctic will be ice free in summer. That would be a different world and we need to know about that in advance; we need to know is that going to happen or will that not happen?

"Prof Rex outlined the plan for the Multidisciplinary drifting Observatory for the Study of Arctic Climate here at the annual meeting of the American Association for the Advancement of Science (AAAS).
The German scientist, who is affiliated to the Alfred Wegener Institute in Bremerhaven, said the €63m (£54m; $67m) expedition was very nearly all funded, and would have key contributions from international partners.


A realtime 3D VR app for visualizing imagery from different camera systems deployed aboard the RV Polarstern.
For details please see the paper.

Other European states, such as the UK, are involved - so too the Americans, the Russians and the Chinese.
The mission has echoes of the Norwegian explorer Fridtjof Nansen's attempt in the 1890s to be the first person to reach the North Pole by drifting in a ship locked in ice.
A schooner called Tara also traversed the frozen ocean - from Siberian waters to the Fram Strait - in the same way a decade ago.
But the RV Polarstern is an enormous science platform and its list of tasks and goals dwarfs those of all previous efforts to work in the region.
"We’re bringing a vessel full with equipment: many, many measurement containers and remote sensing in-situ instruments," Prof Rex said.
"We'll take water, ice and air samples. And we'll set up camps on the sea-ice close to the Polarstern and others up to 20-30km away. And the whole set-up will drift across the Arctic. That will give us a new and absolutely fascinating insight into the climate system."
The MOSAiC team even plans to make runways on the sea-ice so research planes can take to the air in support of the RV Polarstern. 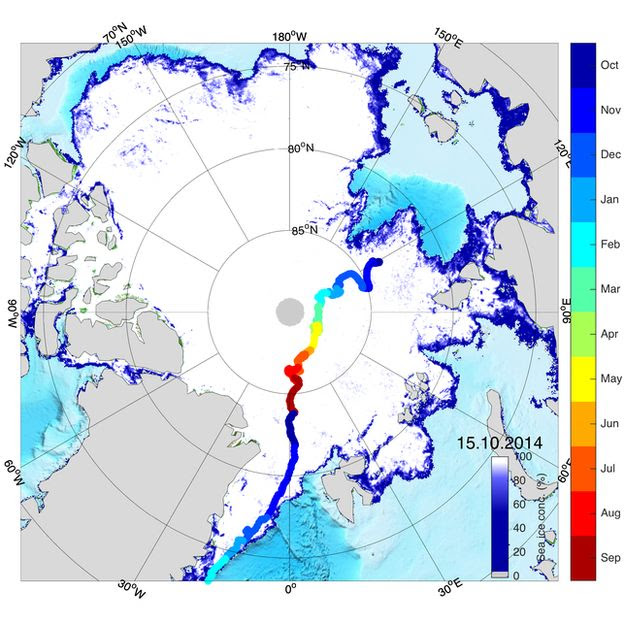 Possible route. The drift would start in the East Siberian Sea. RV Polastern would be taken over the top of the world and be released by the sea-ice in the Fram Strait between Greenland and Svalbard

It will, however, be a difficult expedition for the scientists involved, especially during the freezing midwinter period when the Sun will not get above the horizon.
The researchers will also have to keep their eyes peeled for predatory polar bears.
But Prof Rex said the endeavour was vital to our understanding of this remote region and stressed the relevance to the wider public who live far from the North Pole.
"A warmer pole would affect weather patterns at mid-latitudes," he told BBC News.
"A warming Arctic means that the temperature contrast between our latitudes and the North Pole will be reduced in the future. This means the flow of air, the wind, that blows around the Arctic will be less zonal in the future climate, and it will allow for more excursions of cold air from the Arctic to our latitudes, and more excursions of warm air from lower latitudes to the North Pole. That certainly will have a strong impact on our weather."

RV Polarstern is expected to take up position ready to be captured in the sea-ice in the late summer or autumn of 2019, with the intention of being released a year later.