Dust from western Africa in the centre of the picture, pushing across the Atlantic Ocean on easterly winds in June 2014.
NASA


The way in which man-made acids in the atmosphere interact with the dust that nourishes our oceans has been quantified by scientists for the first time.
In an international study led by the University of Leeds, researchers have pinpointed how much phosphate “fertiliser” is released from dust depending on atmospheric acid levels.

Phosphorus is an essential nutrient for all life, and when it falls into the ocean, it acts as a fertiliser that stimulates the growth of phytoplankton and marine life.
The new study allows scientists to quantify exactly how much phosphate “fertiliser” is released from dust depending on atmospheric acid levels.

Dr Anthony Stockdale, from the School of Earth and Environment at Leeds, is lead author of the study.
He said: “The ability to quantify these processes will now allow models to predict how pollution on a global scale modulates the amount of fertiliser released in airborne dust before it falls into the oceans.
“Many regions of the globe are limited by the amount of phosphorous available, so pollution can have a very important impact on marine ecosystems.”

Fellow author Michael Krom, an Emeritus Professor from Leeds who is now at the University of Haifa, added: “If more carbon dioxide is taken up by marine plants due to fertilisation from acidified dust, it is possible that air pollution may have been inadvertently reducing the amount of greenhouse gases, while at the same time increasing the amount of plants and even fish in areas such as the Mediterranean Sea.”

Co-author Professor Athanasios Nenes, of Georgia Institute of Technology, said the implications went beyond the carbon cycle and climate.
“The Mediterranean is one of many locations of the globe where pollution and dust mix frequently,” he said.
“This study points to one more way this interaction can affect marine life and the 135 million inhabitants of its coastline.”

Professor Krom added: “The next step is to develop models which include this new pathway for increased plant growth in the ocean, in order to fully determine the effect on marine ecosystems and Earth’s climate, considering a full suite of chemical, physical and biochemical processes.”


Satellite tracks Saharan dust to Amazon in 3-D
For the first time, a NASA satellite has quantified in three dimensions how much dust makes the trans-Atlantic journey from the Sahara Desert to the Amazon rainforest. Among this dust is phosphorus, an essential nutrient that acts like a fertilizer, which the Amazon depends on in order to flourish.
The new dust transport estimates were derived from data collected by a lidar instrument on NASA's Cloud-Aerosol Lidar and Infrared Pathfinder Satellite Observation, or CALIPSO, satellite from 2007 though 2013.
An average of 27.7 million tons of dust per year – enough to fill 104,980 semi trucks – fall to the surface over the Amazon basin.
The phosphorus portion, an estimated 22,000 tons per year, is about the same amount as that lost from rain and flooding.
The finding is part of a bigger research effort to understand the role of dust and aerosols in the environment and on local and global climate.
NASA

Phosphorus is one of the essential elements for life and is a critical component of building blocks such as DNA.
Dusts, from deserts such as the Sahara, are an important source of phosphorus to Earth’s oceans.
The mineral-containing dust is generated in copious amounts during storms and is found throughout the atmosphere.
Most of the phosphorus in this dust is in an insoluble form that the microscopic plants of the oceans – phytoplankton and diatoms – cannot get at.
Known as apatite, the phosphorus in the dust is similar to the substance found in our teeth and bones.
Acids can be released naturally into the atmosphere from volcanic eruptions and from living organisms. 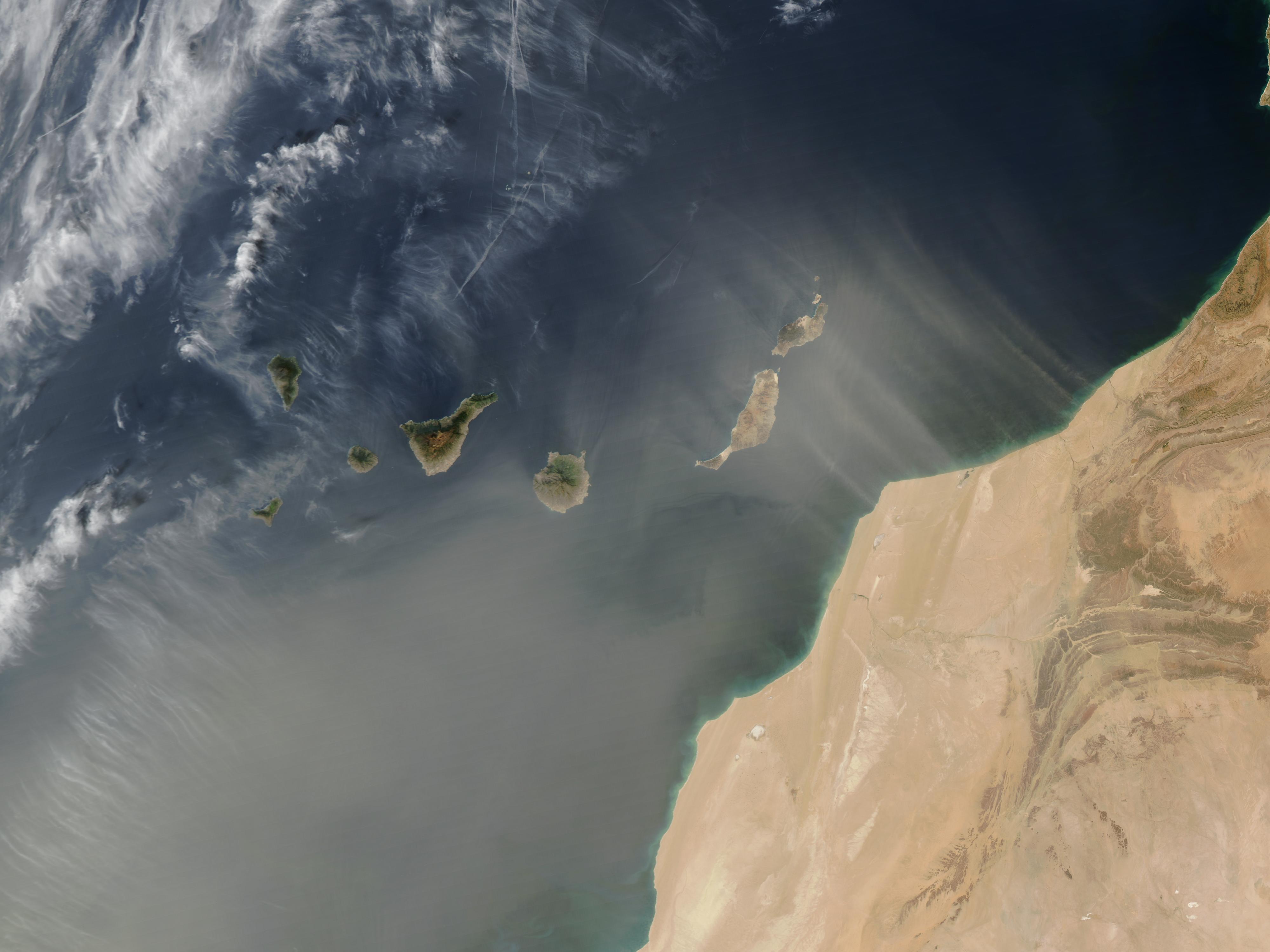 But the burning of fossil fuels is currently the most significant source of atmospheric acids.
In the same way that acid produced by the bacteria in our mouths can cause tooth decay, so can acids in the atmosphere dissolve apatite and turn it into a form of phosphorus that can be used by marine organisms, the study authors said.
As well as researchers from Leeds, Georgia and Haifa, experts from three institutions in Greece, one in Israel, one in Germany and two others in the UK worked on the findings, published today in Proceedings of the National Academy of Science of the USA.