Vasco de Gama sailed the seas during the Age of Discovery,
the same period that Columbus “discovered” the Americas.
This shipwreck is infamous and a whopping five hundred years old.

Shipwreck From Explorer Vasco da Gama's Fleet Discovered March 15, 2016 - After 18 years of research, excavations and archaeological analysis, National Geographic grantee David Mearns has successfully discovered one of Vasco da Gama's ships lost at sea in 1503 off the coast of present-day Oman. Together with the Oman Ministry of Heritage and Culture and over 50 crew members they found thousands of artifacts including gold coins, canonballs, ceramics, and a ship's bell that helped them confirm the age and provenance of the ship.

Vasco de Gama's fleet
Portuguese navigator Vasco da Gama found a sea route to India in 1498, becoming the first European to reach Asia by sea and ushering in an era of Portuguese imperialism.
Da Gama secured a monopoly on the valuable spice trade, terrorizing coastal cities and vessels along the way.
(In one infamous story, da Gama torched a pilgrim ship carrying more than 300 Muslims—including women and children —returning from Mecca.)

When Oman's Ministry of Heritage and Culture recently announced the discovery of a 500-year-old shipwreck from the fleet of famed explorer Vasco da Gama, it marked the culmination of an 18-year archaeological search and recovery effort led by self-described "shipwreck hunter" David Mearns of Blue Water Recoveries Ltd.

During da Gama's second voyage to India (1502-1503),
his uncles Vicente and Brás Sodré were in charge of a five-ship squadron.
They had specific instructions to provide military cover for friendly trading states on the west coast of India and to disrupt Arabic shipping along the route, Mearns told Live Science, but they disobeyed their orders and instead went to the Gulf of Aden, where they carried out a campaign of piracy.


After sacking and killing everyone on five Arab ships (and keeping much of the loot for themselves), the Sodrébrothers needed to make repairs. 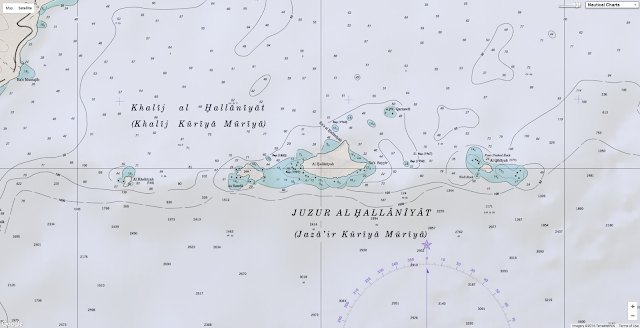 They took shelter in a bay at Al-Hallaniyah, the largest of the Khuriya Muriya Islands, located about 28 miles (45 kilometers) off the southern coast of Oman.
"They were friendly with the Arabs [on the island] and trading with them —maybe too friendly with their wives, it seems from the archives," Mearns said.
The Portuguese ships were anchored in a bay that was protected on all sides—except the north.
When the local fishermen knew there was a strong wind coming from the north, they told the Portuguese sailors to get on the other side of the island.
But, believing their iron anchors to be strong enough to withstand the storm, the Sodré brothers didn't heed the warnings.
The wind came, and the ships' moorings were torn away.
Brás Sodré's ship, nau São Pedro, ran hard aground, but Vicente's ship, nau Esmeralda, sank in deeper water, killing him and everyone else on board.
Another captain from the squadron recounted the disaster in great detail in a letter to the Portuguese king, and the story has been retold in many histories.
"It was a very rich and well-told story, which is great for archaeology," Mearns said.
"You usually don't have that luxury."

Map of the Portuguese discoveries

That story led Mearns to the northeastern coast of Al-Hallaniyah in 1998.
During the initial investigation, he said he found more than 20 large stone cannonballs sitting right on the surface of the seabed.
Mearns and his Omani partners then conducted more thorough archaeological surveys and excavations in 2013, 2014 and 2015.
They found hundreds of artifacts, including copper-alloy barrels, a number of stone shots, gold coins, West African and Asian ceramic pots and stone beads, he said.

"Where most archaeologists study wrecks that have already been found, with this one we actually set out to find it," he says, beginning with an eyewitness account of the Esmeralda, the ship of da Gama's uncle, Vincente Sodré, sinking in the waters off of Al Hallaniyah Island in the Arabian Sea.
The project team, a partnership between Oman's Ministry of Heritage and Culture and Blue Water Recoveries and supported by the National Geographic Society Expeditions Council, spent three seasons mapping and excavating the wreck site.
The remote location and complexity of the shipwreck required a wide array of technology—from magnetometers and differential GPS, to airlifts that work like "underwater vacuums"—and a number of specialists to operate it.
To examine some of the shipwrecks' corroded artifacts, the team turned to high-tech methods.
They used CT scanning to identify two silver coins: the Manuel índio, minted in 1499; and the real grosso, minted sometime between 1475 and 1479.
Portuguese King Dom Manuel I ordered the índio to be struck after the return of da Gama's first voyage to India, specifically to be used in trade with India.
As there is only one other known índio in the world (housed at the National Historical Museum of Brazil), this coin has reached legendary status in the coin-collecting world, Mearns and his colleagues wrote.

Loss of Esmeralda as per Livro das Armadas

CT scans were also used to get a better look at a bell (which was wrested from under a boulder in shallow water) and found that it was inscribed with the numbers "498."
The researchers suspect that perhaps the "1" eroded from the manufacture date of 1498; that would chronologically fit with Sodré's squadron, which left Lisbon in 1502.
"It's very possible that that could be the oldest ship's bell ever found in the world," Mearns said. "And it was found less than 100 meters [328 feet] off a shoreline, in a depth of water that you could have snorkeled to. As small as the world is, there are still places left to explore."

After recent underwater excavations and careful analysis of more than 2,800 artifacts, including cannonballs and rare coins, the researchers are now fairly certain they have found the nau Esmeralda, the doomed ship commanded by da Gama's uncle.
Shown here is a copper alloy disk, marked with the Portuguese royal coat of arms.

Take a behind-the-scenes look at what it took to locate and excavate the earliest shipwreck we have from Europe's Golden Age of Exploration.

The findings were published online March 14 in the International Journal of Nautical Archaeology.