The jellyfish’s swimming secret? It’s a master of suction

Watch this on The Scene

Few natural phenomena are as mesmerizing as a swimming jellyfish, with its graceful full-body contractions.
Biologists rhapsodize about it for a different reason than your typical aquarium-goer, though: It’s a highly efficient way to get around the ocean.
And now, scientists have figured out exactly what helps drive that locomotion.

New research in Nature Communications reveals that jellyfish and an unrelated eel-like creature called a lamprey are in fact more pulling their bodies along than pushing.
That might seem like a minor discovery, but in fact it could transform not only how engineers think about building underwater vehicles, but how biologists think about movement at large.

Take a look at the GIF below.
That’s a swimming lamprey, surrounded by millions of miniscule glass beads.
By shining lasers into the tank and recording it all with high-speed cameras, researchers were able to track the movements of the beads and calculate the different pressures the lamprey creates as it cuts through water.

A lamprey doing its thing. Red is high-pressure water, while blue is low-pressure.
John O. Dabiri

What you’re seeing in red at the lamprey’s snout is an area of high pressure, which you’d expect where the creature has to break through the water.
More interesting, though, are the blue bits: areas of low pressure that those undulations create.

As the lamprey twists and rotates, it churns the water next to its body into small whirlpools, explains Stanford University’s John Dabiri, a fluid dynamicist who authored the study.
“At the center of those vortices you end up getting low pressure, just like in a hurricane or tornado you often will have low pressure in the middle of that rotating mass of air.”
Those low pressure whirlpools form near the creature’s forward-facing surfaces, sucking in the water ahead of the lamprey and propelling the animal forward.
The jellyfish is the same way: Both animals essentially suction their way through Earth’s oceans. A lamprey illuminated with the green and red lasers
that track the movement of tiny glass balls in the tank.
Sean P. Colin

That mechanism makes them highly efficient swimmers.
If these animals just propelled themselves forward by pushing water back with their waggling tails or full-body contractions, they’d waste a lot of energy—imagine the waves left behind a high-speed motorboat.
“In the case of the suction motion,” Dabiri says, “it’s possible to sort of slip past that water without leaving a lot of energy in your wake.”

These findings could be a big deal for engineers.
Like a flick of a fish’s tail tends to waste energy, so too do propellers.
But there may be a way to generate low-pressure suction around a vessel to give it a boost, says Dabiri.

If engineers end up capitalizing on this suction-driven swimming technique, they won’t be the only ones.
Biologists may take note too.
Lampreys and jellyfish are pretty darn evolutionarily distinct—they’re not even remotely closely related.
So if this trick of locomotion is present in two disparate groups, it may well show up elsewhere in the animal kingdom.
To create the low-pressure vortices, both the lamprey and the jellyfish exploit their bendy bits—and all kinds of other structures in the animal kingdom are nice and flexible as well.
“What we see are, for example, wings and fins bending somewhere around 70 percent of the way,” says biologist Jack Costello of the Marine Biological Laboratory, who was also involved in the research.
“That seems to be true whether it’s a mosquito wing or a condor wing or fish bodies.” 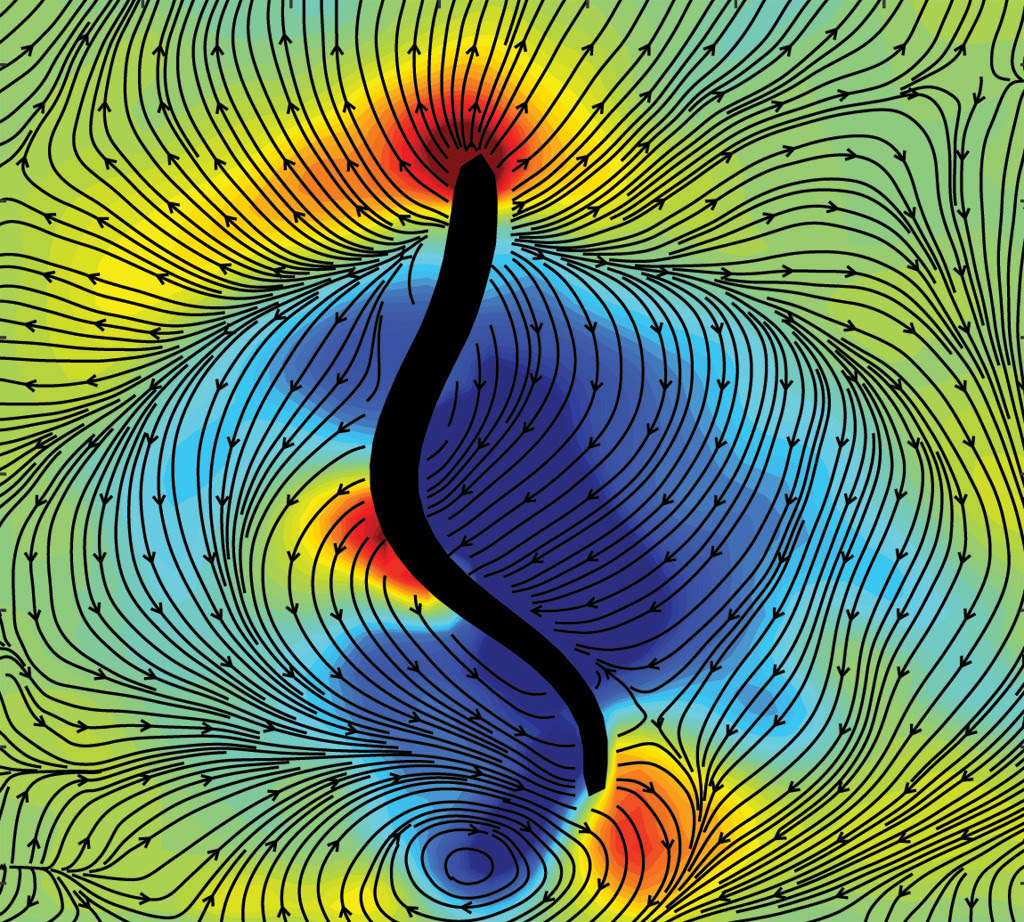 Another shot of a swimming lamprey, this one showing the direction of flowing water.
John O. Dabiri

Could it be that other creatures out there are utilizing the suction trick?
With such a big advantage in energy savings, one might expect evolution to select for it.
“It’s such a strong selective force acting, it doesn’t care what lineage you come from,” says Costello. “It’s sort of like gravity doesn’t care whether you’re a dinosaur or a tsetse fly.”
The beautiful, hypnotic jellyfish, then, may hold far more secrets than it lets on.
So the next time you’re at the aquarium, take time to appreciate its ballet.
It’s kind of a big deal.
Posted by geogarage at 1:07 AM