The US Coast Guard says that the missing cargo ship El Faro sank
after sailing into the path of Hurricane Joaquin in the Bahamas.

The Coast Guard believes the missing cargo ship sank in the Atlantic Ocean with 33 people aboard.

Rescuers have been searching for the container ship, which was in the path of Hurricane Joaquin, since the crew last made contact Thursday morning, saying El Faro was listing but the situation was manageable.

The vessel was carrying 33 people—28 Americans and five Poles—and while searchers have found debris they believe came from the ship, they haven’t found the vessel itself or any survivors. One body has been found. 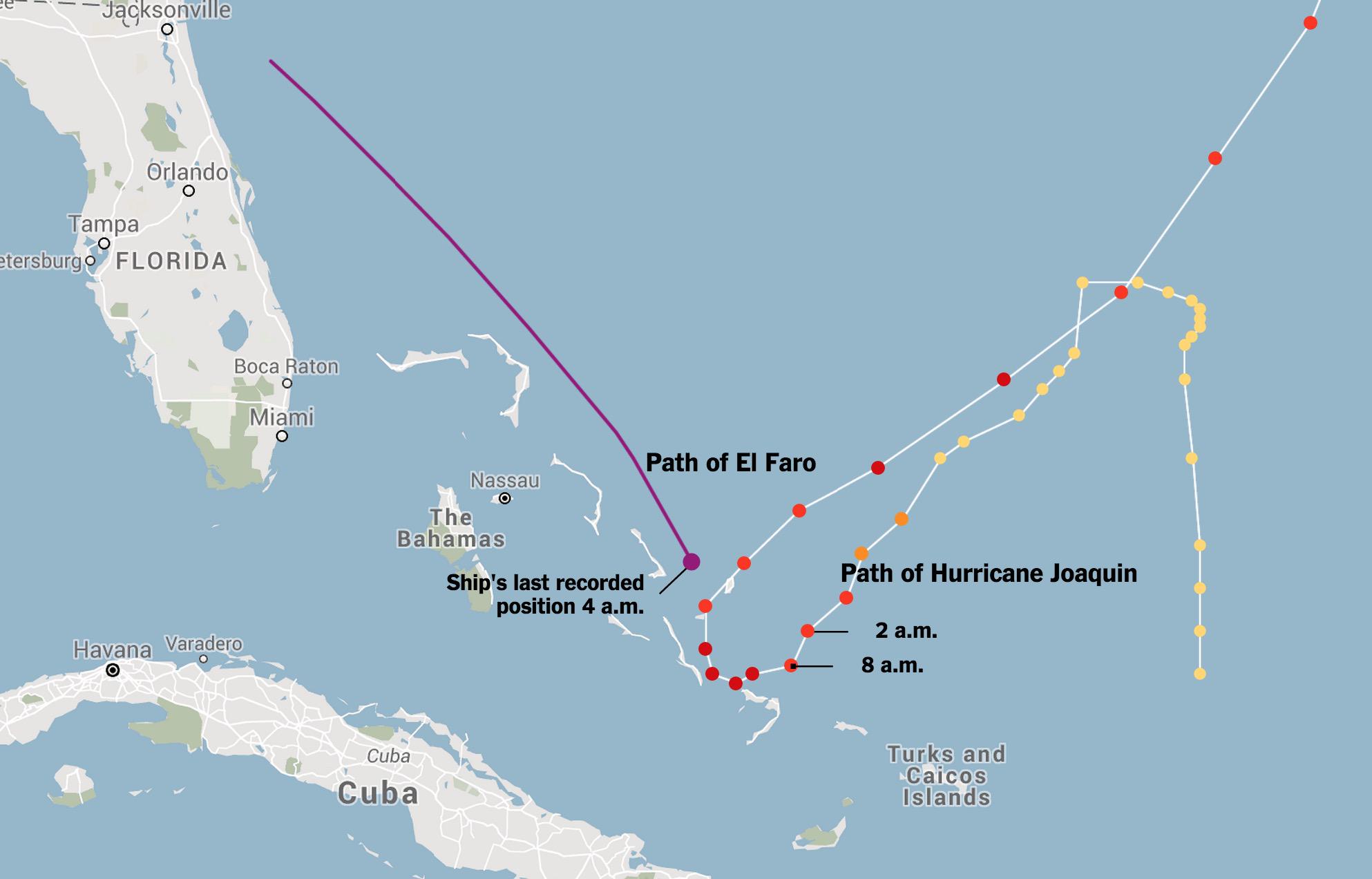 While nautical disasters remain a fact of life—everything from missing sailboats to deadly catastrophes like the Costa Concordia’s sinking or recent ferry disasters in Asia—it is exceptionally rare for a large ship like El Faro to disappear.

How rare? An analysis of vessels greater than 100 gross tons by the insurance giant Allianz found that in the past 10 years, from 2005 to 2014, only six ships were reported as “missing/overdue”—or, in other words, lost. Three were in 2005.


There were none reported in 2011, 2012, 2013, or 2014.
This isn’t to say that ships don’t sink.
In 2014, 49 ships “foundered,” which includes sinking or submerging—the largest category of ship losses.
But often those are cases where ships sink with some warning, and most or all of the crew can be rescued.
The second-largest category is ships that ran aground.
(An excellent 2008 Wired story goes inside the world of ship-salvage crews that try to right these vessels.)
It’s not an illusion that shipping seems safer these days.
The number of total losses has decreased over the last decade.
And no ship lost in 2014 in any method—foundered, wrecked, or otherwise—was as large as El Faro, which was built in 1975 and was 790 feet long with a gross tonnage of 31,515.
The biggest cargo ship lost last year was 12,630 gross tons, and while eight of 20 crew members died, that was in a collision—not a disappearance.
The Caribbean, where El Faro is missing, also sees comparatively few losses versus the South China Sea, the Mediterranean, or the British Isles.

It’s far too early to know what went wrong with El Faro. It’s not uncommon for cargo ships to lose containers in heavy seas, but sinking is.
Allianz lists several risk factors for ships: overreliance on electronic navigation; understaffed or undertrained crews; and structural weakness.


El Faro was much older than the average container ship worldwide, which is just under 11 years old, but her owner told the AP the boat was in good condition and suited to rough weather because she was built for Alaskan trade: “She is a sturdy, rugged vessel that was well maintained and that the crew members were proud of.”
Beyond that, large container ships are generally built to withstand major storms.
The nature of the business is that captains still have great discretion in how they choose to handle a storm, or whether to try to avoid it.
El Faro had a built-in advantage in that it was carrying cargo; an empty ship is harder to handle in rolling waves, Popular Mechanics noted in 2012.
Port has its own risks—a ship can be battered against a pier or run aground.
That encourages some captains to stay at sea.
Before losing contact, El Faro radioed that it was aware of the weather and was prepared.
But, retired captain Max Hardberger wrote for the trade site gCaptain, “If the master does decide to put to sea, he should realize that he may be exchanging a dangerous situation for a suicidal one.”
If in a storm, however, the captain has to concentrate on two things, he wrote: keep plenty of room away from shore, reefs, and other obstacles; and keep the boat pointing into the waves.

Steering-way is necessary to keep the bow into the wind and waves.
If the main engine fails and the ship falls off broadside to the waves, it will be in a perilous situation.
The ship must also have adequate sea room to leeward, both as insurance in case she loses steering-way and to counter the effects of wind, waves, and current.
If the master has any doubts about his searoom, he must make way offshore while it is still possible. Failing all that, ships are typically equipped with enclosed lifeboats that can launch in a storm and will withstand bad conditions.
In pitching seas, it can be impossible to launch a traditional, uncovered lifeboat.
A boat from the famous Edmund Fitzgerald, found shorn apart after the sinking, shows their inadequacy. But a crew needs to have some warning in order to get into modern lifeboats, too.
So far, searchers have found one of the ship’s two boats.
It was empty.
Links :
Posted by geogarage at 1:33 AM