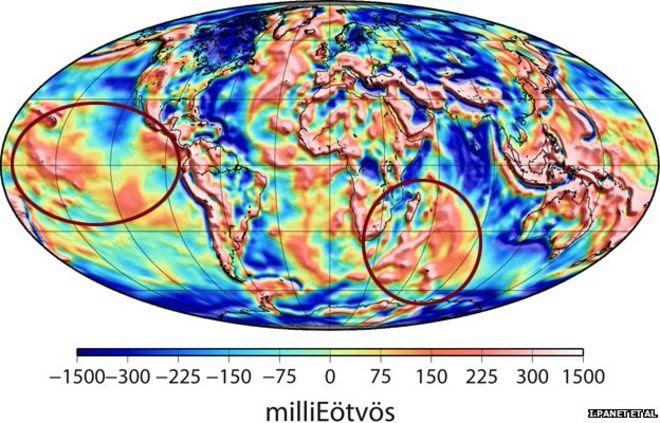 Goce detects deep plumes of mantle material rising from more than 2,000km down

Europe's Goce gravity satellite has provided striking new visualisations of the Earth's deep interior.
Its gravity data has enabled the effect of variations in the density of rock to be traced up to more than 2,000km below the surface.
The maps, published by the journal Nature Geoscience, help to show how material moves up and down, driving a range of geological phenomena.
These include subduction zones, where the great tectonic slabs covering the Earth's surface dive under one another.
"Ultimately, volcanic activity and earthquakes occur because of these slow movements inside the Earth's mantle," explained Dr Isabelle Panet from the Institute for Geographic Information and Forestry, Paris, France.
"The volcanoes and earthquakes are, if you like, just the surface expression of these deep dynamics," she told BBC News.

By tracking the speed at which waves of energy from tremors propagate through rock, scientists can determine the structure of the Earth's interior - a technique known as seismic tomography.
But to convert these speed variations into densities, seismic tomography leans on quite a few assumptions, including the temperature and composition of the rock at various depths.
Determining these density differences is, however, essential to derive the relative buoyancy of material.
This might be hotter, lighter material on its way up, such as in a plume of magma; or cold dense rock on its way down, such as a swathe of oceanic crust descending at one of those subduction zones.

Goce offers some complementary information.
The satellite, which flew from March 2009 until November last year, gathered unprecedented information on the subtle changes in the pull of gravity around the Earth.
These deviations reflect differences in the mass, and by extension the density, of material at depth.
By viewing the rate of change, or gradient, in the acceleration due to gravity in three separate directions, Dr Panet and colleagues have been able to pull out a number of interesting features from the data. 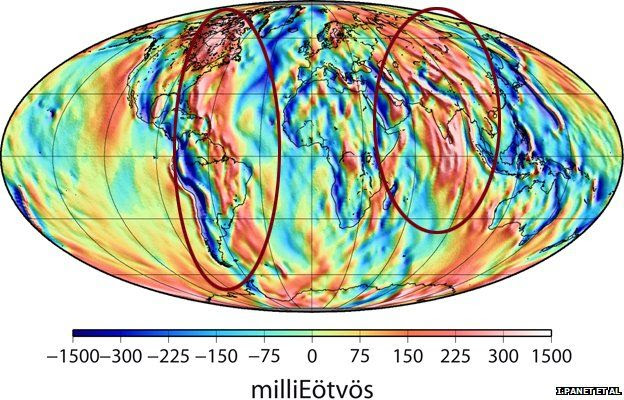 These include major mantle plumes in the Pacific and south-east of Africa.
Also visible are ancient subduction zones running deep under Asia and along the Americas.
What Goce is probably seeing is the buried remnants of old plate material of Jurassic age (older than 150 million years ago) in the case of Asia, and of roughly Cretaceous age (older than about 60 million years ago) in the case of the Americas.

In addition, the satellite's gravity data contains a residual signal of the former Tethys Ocean. Subducted material is seen in the maps stretching from the Mediterranean to the Himalayas.
The Tethys Ocean is thought to have closed in the past 40-50 million years as India and Asia collided.
Dr Panet said: "The main interest of these gravity gradient data is to use them in combination with seismic tomography because the maps of seismic velocity anomalies - they do not give you the mass.
"And the mass is a very important parameter to understand the dynamics of the mantle because it creates the buoyancy forces that drive material up and down. Now, by combining the structural information from seismic tomography and the mass sensitivity of the Goce data, we can better understand the dynamics of the mantle's convective fluids."

Goce's ability to sense the uneven distribution of mass through the Earth has already allowed scientists to map the boundary globally between the Earth's crust and the mantle - the so-called Moho boundary.
The famous "discontinuity" lies some 10-70km below the surface and marks a sharp change in rock properties.
Other researchers are investigating old plate movements by linking gravity signals on different continents, such as on Africa and South America, to show how they were once joined together.
"What we are seeing is that Goce data enable us to sense features from really quite shallow regions in the crust, down to very deep in the mantle," commented Dr Rune Floberghagen, the European Space Agency's mission manager for Goce. 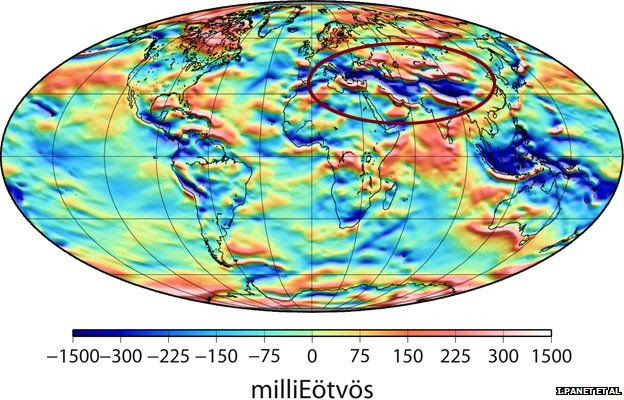 Note : The Eotvos is a unit for the rate of variation of the gravitational acceleration.