Children of the Tide - Microscopic life in the ocean
This science/art video presents the rarely-filmed embryo and larval development of common marine invertebrates during the first few weeks of their lives as "Children of the Tide".
Mostly filmed under a microscope using a "dark field" lighting technique.
This 8 minute version is cut down from the original 24 minute version that was distributed to marine science centers and schools.
Filmed at Friday Harbor Laboratories (Washington, USA) and Vancouver Island, Canada.

From The Guardian by Rebecca Bell

The sea off our coasts teems with microscopic life that breaks down the carbon dioxide we pump into the air.
Now a series of expeditions aims to find out more

Our coastal seas play a much bigger role in our lives than simply providing a nice backdrop to a fish and chip supper on the beach and the occasional paddle when the weather allows.
The sea close to the coastline is known as the shelf sea and it extends out until the seabed reaches a depth of 200 metres.
In the UK our widest shelf sea reaches 300km from the mainland.
These shallow shelf seas make up only 5% of the world’s oceans but 15-20% of all life in the ocean lives here.
They remain mysterious.
“We are not entirely sure how the shelf seas can sustain quite so much biological growth,” says Professor Jonathan Sharples from the University of Liverpool.
“They must receive nutrients from the deep ocean to fuel this growth, but we don’t know how this happens.”
Whatever the reason, these shallow seas sustain 90% of the world’s fisheries and are one of the most important ecosystems on Earth.

As well as helping to supply our national dish, these shelf seas play an important but not completely understood role in controlling the levels of CO2 in the atmosphere.
In the same way as trees and vegetation on land, shelf seas can suck out CO2 from the atmosphere like a pump.
There are two parts to the shelf sea CO2-zapping machine.
“First, CO2 dissolves in the surface of the ocean if the concentration of CO2 in the sea is less than in the atmosphere,” says Dr Joanne Hopkins from the National Oceanography Centre.
“You could think of this as the reverse of bubbles escaping when you open a fizzy drinks bottle – because the concentration of CO2 in the air is less than in the bottle.”
The other important part of the system is the micro-organisms themselves, which the shelf seas are teeming with.

Plankton from Parafilms
New videography techniques have opened up the oceans' microscopic ecosystem, revealing it to be both mesmerizingly beautiful and astoundingly complex.
Marine biologist Tierney Thys teamed with Christian Sardet (CNRS/Tara Oceans), Noé Sardet and Sharif Mirshak to use footage from the Plankton Chronicles project to create a film designed to ignite wonder and curiosity about this hidden world that underpins our own food chain.

If you were to take a swim in the sea and accidentally gulp some water you would swallow thousands of micro-organisms called plankton, which amazingly, given their minute size, are a crucial food source for whales.
There are two types of plankton: phytoplankton (tiny marine plants) and zooplankton (tiny marine animals).
One thousand of the smallest phytoplankton would measure 1mm, while typical zooplankton are 1-5mm in length.
Plankton make sea water look murky and this biological material is rather romantically known as “marine snow”.
As phytoplankton grow they take up CO2 and convert it to organic carbon and oxygen, in the same way as a leaf does by photosynthesis.
“Half of the oxygen we breathe comes from forests, the other half from these tiny marine plants,” says Sharples.
“The zooplankton then eat the organic carbon that the phytoplankton are made of."

“The oceans remove about one-third of the total carbon we put into the atmosphere each year by burning fossil fuels, and shelf seas play a disproportionately high role because of their high biological activity,” says Dr Louise Darroch from the British Oceanographic Data Centre. “We want to understand how plankton extract CO2 from the atmosphere and how their ability to remove CO2 may be sensitive to changes in our climate.” 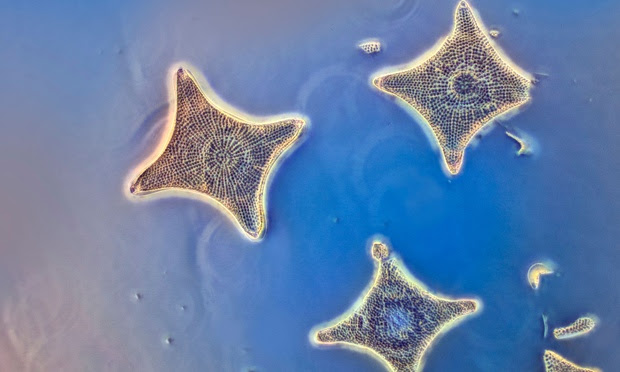 In order to tackle this important question, the Natural Environment Research Council and the Department for Environment Food and Rural Affairs have funded a project called Shelf Sea Biogeochemistry which will take measurements throughout shelf seas in a number of expeditions over the next year.
Sharples, Hopkins and Darroch returned from one of these surveys just before Christmas.
“Our research expedition took us to the Celtic Sea aboard the UK’s newest research vessel, the RRS Discovery,” says Sharples.
“The expedition was 25 days long with no sight of land. The ship carries 50 people, roughly half of them scientists and half crew. At 100 metres long, the ship is capable of working in most weathers, though seasickness can be a bit of a problem for the first few days as we all get used to the motion.”

The research involved measuring the concentration of nutrients and organic material in the water, collection of sediment from the seafloor and monitoring changes in the temperature and saltiness of the water.
A range of instruments was used – including autonomous gliders that measure temperature and water turbulence, and are controlled remotely by someone sitting comfortably onshore – as well as “snowcatchers”.

“Snowcatchers are huge plastic tubes, as tall as a room and one metre in diameter, that are lowered beneath the sea surface to a particular depth where they are closed, capturing the water around them along with all the marine snow floating in it,” says Hopkins.
Once up on deck, scientists can investigate how plankton – and importantly, zooplankton faeces – can settle.


Plankton of the French Riviera from Parafilms

“Particles in the ocean sink, taking with them lots of carbon that was removed from the atmosphere. It’s what happens to these particles and the carbon they carry that forms the basis of a large component of our work,” says Darroch.
If organic material sinks quickly, the carbon reaches the seabed before dissolving, and under the right conditions it can be locked up long-term in the deep marine realm.
If undisturbed it will remain there, and this is how fossil fuels form – if the right conditions prevail over millions of years.

Studies like this will provide a better understanding of how much CO2 is removed from the atmosphere in shelf seas today.
Once we know this we can more effectively model how future changes in climate will affect this ecosystem, and the waters that we rely on so heavily for energy, food and recreation.