‘The man who doesn’t breathe’: World-record diver can hold his breath underwater for 22 minutes

Stig Åvall Severinsen was the first person to hold his breath for more than 20 minutes under water,
a Guinness World Record.
He believes that controlling our breath means controlling our lives.


These photographs show a world record holder in training – a man who can hold his breath underwater for 22 minutes.
Stig Severinsen - nicknamed The Man Who Doesn't Breathe – is the holder of multiple records in diving using his 'State of Zen' technique to control his breathing.
In October 2012, Mr Severinsen broke the record for the longest time breath held voluntarily by a male by spending 22 minutes with his head submerged in a pool in London. (video)

He also holds the record for the longest underwater swim, travelling 500ft (152m 40cm) in just two minutes and 11 seconds.

The 41-year-old from Aalborg said: 'After holding my breath for 22 minutes I actually feel quite ok. 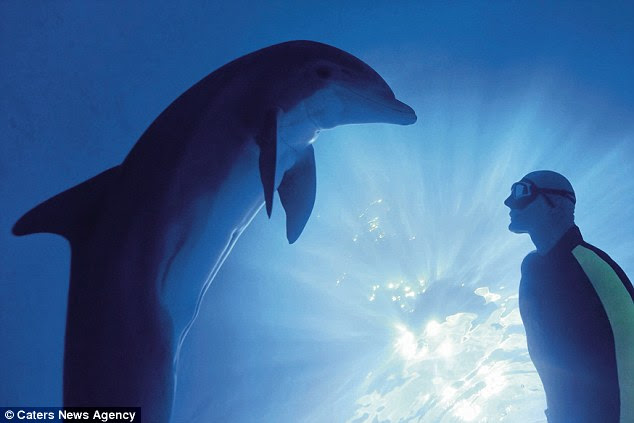 'The most stressful time is usually before the dive but then I get into my zone.
'I've always loved water - from splashing around as a baby to trying to grab as many rubber animals in a single breath.'

Mr Severinsen began free diving in 2003 after a recommendation from his underwater rugby coach.
By the end of his first year of practising he had already broken three records and he spent almost ten years perfecting his meditation technique before breaking the 22 minute dive.
The Dane has written a book called Breatheology which helps people find their 'inner dolphin' - a state of mind to help control breathing underwater.


On a single breath of air, Stig Severinsen sets a new official Guinness World Record by swimming 250 feet (76.2m) below the ice in a frozen lake in East Greenland.

He explained: 'Your heart rate drops, blood pressure changes and your mind shifts.
'This helps alter your brainwave activity alters and you feel in perfect happy balance with your life.
'You have to get into a truly meditative state where you leave all your troubles behind.
'To do this I like to focus on one subject - something like a loved-one or a journey I've taken.'
Mr Severinsen has now retired from breaking records and is spending his time teaching his techniques to everyone from kids swimming clubs to the military.
Posted by Peio at 1:11 AM