The world just experienced its hottest June on record.
The heat was driven in large by part by the hottest ocean temperatures since recordkeeping began more than 130 years ago.
That makes this the third-warmest start to the year.
The global temperature was 1.3°F above the 20th century average in June according to data released on Monday by the National Climatic Data Center (NCDC).
That bests the previous hottest June record, set in 1998, by 0.05°F.
June was the 352nd consecutive month in a row with temperatures that were above the global average.
The last cooler-than-average month was February 1985, the month of “Careless Whisperer.”
The June hot streak extends back even further, with the last cool June coming in 1976 when people were grooving to Wings’ chart topper, “Silly Love Songs.”

The lengthy stretch of hot months is being driven primarily by the rise of greenhouse gases in the atmosphere.
Human activities are responsible for much of that rise and with recent carbon dioxide milestones passed, emissions show no sign of slowing.
Regionally, there were a few particularly hot spots.
Notably, New Zealand had its hottest June as did large part of East Africa and chunks of Southeast Asia.
There were a limited number of cool spots, mostly in Alaska, which baked through the first five months of the year, and far eastern Siberia.
When looking at land areas only, this was the 7th-hottest June.
Temperatures averaged over land were 1.7°F above average.

June Global Land and Ocean plot
It’s the ocean surface temperatures that put the month over the top.
Temperatures were 1.2°F above average.
That’s a smaller number than the 1.7°F land averages, but oceans tend to lag behind air temperatures.
And despite being a smaller number, oceans cover 70 percent of the planet, which tend to give them more weight on global temperatures.
This June represents a significant milestone for the world’s oceans.
Not only was it the hottest June for oceans since record keeping began in 1880, but it was the most anomalously warm ocean temperature for any month.
That means temperatures were more freakishly above average this past June than at any other time in the period of record.
The previous record was a four-way tie with May 2014 being the most recent month.
This June’s temperature record also represents a global mark for the warmest the oceans have ever been.
The record heat happened to hit in June, when oceans are at their warmest, giving temperatures a further boost.
The news comes on the heels of last week’s State of the Climate report, an annual climate check-up for the globe.
The report showed that 2013 saw record amounts of heat trapped in the upper half mile of the ocean, a phenomenon that scientists think is contributing to the “pause” in global warming. 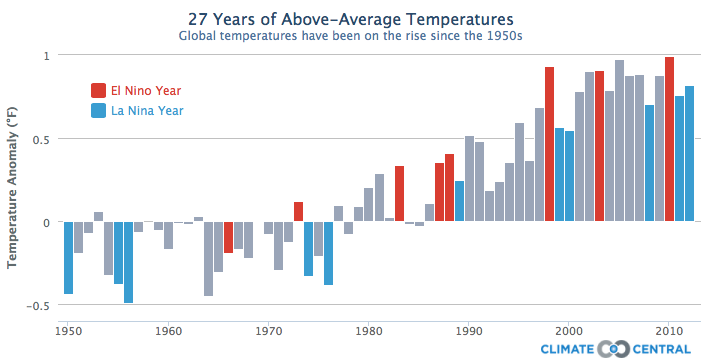 Of course, talking about a “pause” is a bit of an overstatement.
This year is on track to be the third-warmest.
NCDC also said that 9 of the 10 warmest Junes have occurred since 2000 (with 1998 being the lone holdout).
El Niño, the climate phenomenon on the tip of every weather geeks’ tongue, has the potential to ratchet up the global temperature even further by year’s end.
Though there’s been an El Niño watch in place for months, the phenomenon, which is characterized by warm waters in the eastern tropical Pacific, has yet to form.
Forecasters give it a 75 percent chance of forming by fall, though, which could make the year end on a hot note.
Whether it would be enough to overtake 2010, the year of “Tik Tok,” as the hottest year on the record remains to be seen.