Whale spotting from space is fun, efficient and accurate

From TechTimes by Alex Saltarin

Scientists have found a new way of keeping track of whale populations.
Using high-resolution images taken by satellites high up in orbit, scientists are now able to count individual whales in the world's oceans. 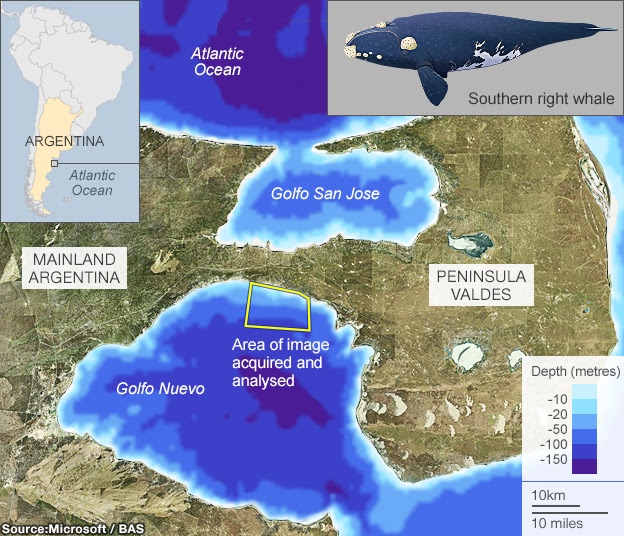 The technology has been successfully tested to count southern right whales in the Golfo Nuevo, off the coast of Argentina, pictured, and it is hoped the scheme will be rolled out globally

Before this new technique was conceived, scientists had to count whales using a more primitive and painstaking method.
Researchers and volunteers had to board ships and count whales by looking for distinctive blowholes sprays and the occasional jumping whale.
Aside from being inefficient and time consuming, this method is also not very accurate.
Moreover, scientists are limited to counting whales one small area at a time.
With the new method, however, scientists have something even better than a bird's eye view of the oceans.

A team of scientists has used high-resolution satellite imagery to count whales.
The images taken from orbit give scientists useful data for the the conservation and documentation of whale populations.
Pictured here are composite images of southern right whales seen from orbit.
(Photo : BAS)

"This is a proof of concept study that proves whales can be identified and counted by satellite," says lead author Peter Fretwell of the British Antarctic Survey (BAS).
"Whale populations have always been difficult to assess; traditional means of counting them are localized, expensive and lack accuracy."
"The ability to count whales automatically, over large areas in a cost effective way will be of great benefit to conservation efforts for this and potentially other whale species," Fretwell adds. 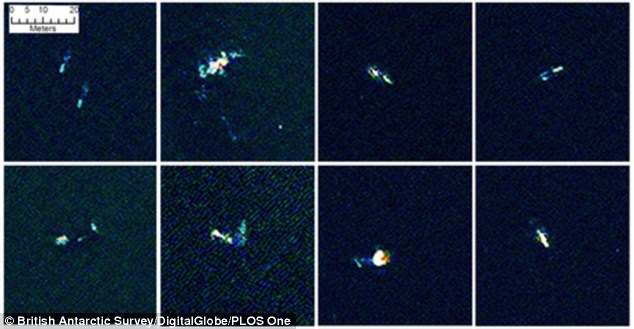 Aside from reducing the time it takes to count whale populations, using images taken by satellites also significantly reduces the cost of these surveys.
Fretwell and his colleagues published their findings in the online journal PLOS ONE.
While using satellites to count whales isn't exactly a new idea, previous attempts proved to be inaccurate due to limitations in technology.
With today's crop of next generation satellites, however, counting whales from space is now both practical and accurate.

The team of researchers used a satellite image taken by the WorldView 2 satellite to count southern right whales that have gathered in a bay to mate and to give birth to young whales.
The location was chosen due to the fact that the bay had shallow waters, which made it easier for the scientists to count the individual whales in the area.

New high resolution satellite image processing technology allows researchers to identify and count right whales at the ocean surface or to depths of up to 15 metres — described as a boon to tracking the health of whale populations.

The southern right whale is an endangered species that was almost driven to extinction due to excessive whaling.
Scientists have been looking for an accurate method of gauging their current numbers to see how well the populations were growing.

"Visual inspection of the image showed that a number of offshore objects, that were both the right shape and size (5 - 15 m) to be whales, could be identified in both the colour and the panchromatic bands," says Fretwell and his colleagues.
"Most of these objects were visible across all bands although in most cases the high resolution of the panchromatic band rendered the objects in greater detail."