The coldest place in the world identified by satellite


What is the coldest place in the world?

It is a high ridge in Antarctica on the East Antarctic Plateau where temperatures in several hollows can dip below minus 133.6 degrees Fahrenheit (minus 92 degrees Celsius) on a clear winter night -- colder than the previous recorded low temperature. 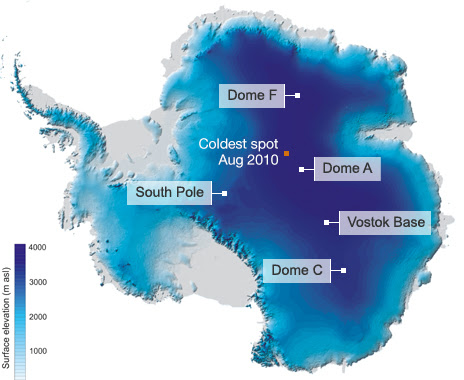 The locations of the coldest places on earth

Scientists at the National Snow and Ice Data Center made the discovery while analyzing the most detailed global surface temperature maps to date, developed with data from remote sensing satellites including the MODIS sensor on NASA's Aqua satellite, and the TIRS sensor on Landsat 8, a joint project of NASA and the U.S. Geological Survey (USGS).

The researchers analyzed 32 years of data from several satellite instruments that have mapped Antarctica's surface temperature.
Near a high ridge that runs from Dome Arugs to Dome Fuji, the scientists found clusters of pockets that have plummeted to record low temperatures dozens of times.
The lowest temperature the satellites detected -- minus 136 F (minus 93.2 C), on Aug. 10, 2010.

The new record is several degrees colder than the previous low of minus 128.6 F (minus 89.2 C), set in 1983 at the Russian Vostok Research Station in East Antarctica.
The coldest permanently inhabited place on Earth is northeastern Siberia, where temperatures dropped to a bone-chilling 90 degrees below zero F (minus 67.8 C) in the towns of Verkhoyansk (in 1892) and Oimekon (in 1933).

At the coldest spots on Earth, every breath is painful.
But how cold can it get on Earth's surface?
What sort of weather brings on the record-breaking cold?

On the high plateau of East Antarctica, there is a ridge along the ice sheet nearly 14,000 feet above sea level.
The dry atmosphere and the long, sunless winter months combine to make this the coldest place on earth.
Under the clear Antarctic night skies the snow surface radiates warmth into space, cooling the air just above the surface.
As the air cools, it gets denser and starts to slide down the slope off of the ridge.
It collects In small hollows just a little downhill and continues to be cooled as the snow in the hollow radiates away its small amount of warmth.

The MODIS sensor on NASA's Aqua satellite allowed researchers from the National Snow and Ice Data Center to find the coldest place on Earth.
By turning to the TIRS sensor on the NASA/USGS Landsat 8 satellite, with its higher spatial resolution, the scientists were able to confirm how the topography facilitates these record low temperatures.