Mystery of how the wandering albatross travels 10,000 miles in a single journey without flapping its wings is solved

Dynamic Soaring: How the Wandering Albatross Can Fly for Free
The wandering albatross spends weeks, even months, at sea without ever returning to land.
With precise GPS data and custom navigation software, researchers have finally figured out how.
Animation: Institute of Flight System Dynamics

The mighty albatross can use its huge 3.5 metre wings to circumnavigate the globe in just 46 days.
But its ability to travel 10,000 miles in a single journey, without expending almost any energy, has long confounded scientists.
Now a team of researchers believe they have worked out how these majestic creatures are able to stay aloft in the skies without flapping their enormous wings. 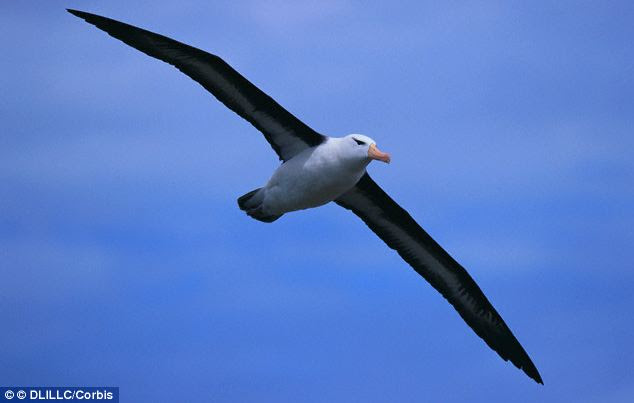 The mighty albatross can use its huge 3.5 metre wings to circumnavigate the globe in just 46 days.
But its ability to travel 10,000 miles in a single journey, without expending almost any energy, has long confounded scientists

Researchers, led by Gottfried Sachs of the University of Technology, Munich, used advanced GPS tracking on a group of 16 wandering albatross.
This allowed them to measure each bird’s position 10 times a second and to within a few centimetres, providing a detailed record of their flight path.
They found that once in the air, the birds performed a flying trick that seemed to involve characteristic repetitive up and down manoeuvres – a technique known as ‘dynamic soaring’. 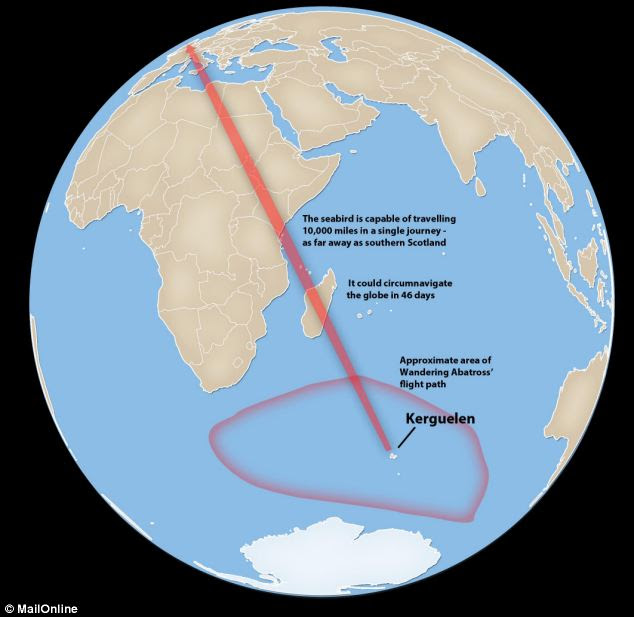 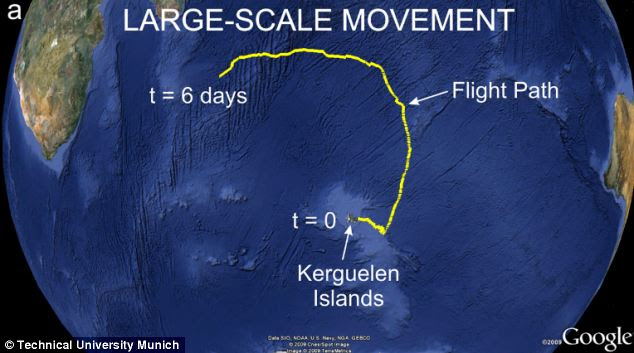 The 4850 km path (projected to the sea surface) of a long-distance flight of a wandering albatross is shown. GPS tracking stopped after the first 6 days of this 30-day-long foraging trip

Dynamic soaring involves the birds gaining height by angling their wings while flying into the wind.
They can then turn and swoop along for up to 100 metres at speeds of up to 67 miles per hour.
By repeatedly using this method, the scientists believe the wandering albatross can travel thousands of miles without flapping its wings.
Aerospace engineer Gottfried Sachs said dynamic soaring has been observed before, but its mechanics have remained a mystery since as early as the 1880s.
‘Students of the albatross’s flight understood early on that the bottommost layer of wind blowing above any surface, including that of water, will incur friction and thus slow down,’ explained Professor Sachs, writing in IEEE Spectrum. 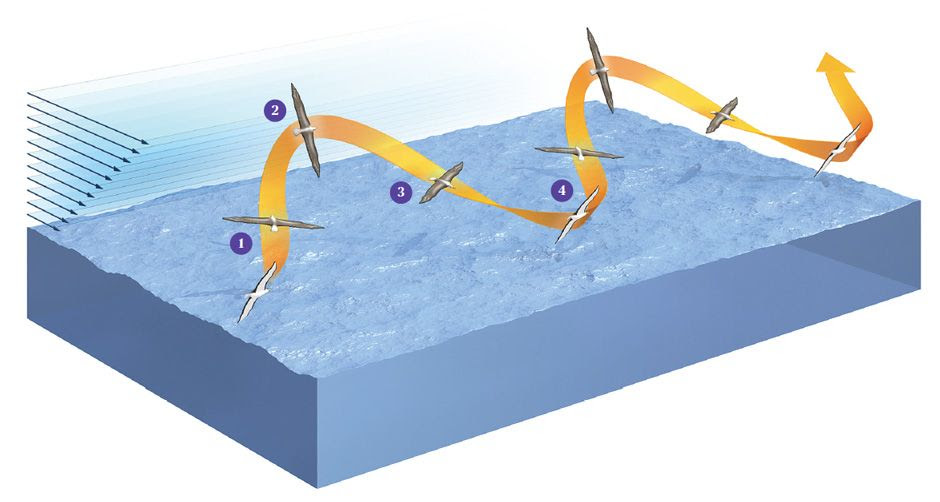 Illustration: Emily Cooper
Flying Free as a Breeze: Unflapping flight, called dynamic soaring, allows the wandering albatross to extract energy from the shear wind field, in which the wind’s strength increases with each additional meter above the water’s surface.
Beginning near the surface, the bird climbs into the wind [1], turns to leeward [2], descends [3], and again turns into the wind [4].


‘This layer itself then becomes an obstacle that slows the layer just above it’.
This result is a 10 to 20-metre high region known as a ‘boundary layer’ through which the wind speed increases smoothly the higher you go in the field.
‘Dynamic soaring manoeuvres extract energy from that field, enabling the albatross to fly in any direction, even against the wind, with hardly any effort,’ said Professor Sachs.
Exactly how the bird extracts energy from a horizontally blowing wind, however, was a puzzle.
By combining computer modelling with GPS tracking, the team were able to accuratley simulate the flight of the bird in different wind speeds. 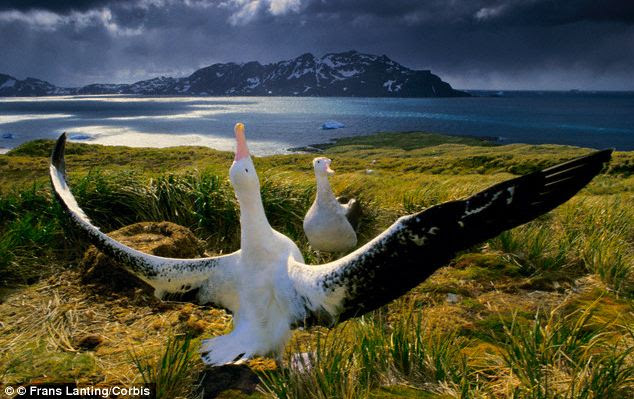 Wandering albatross have the record for the bird with the largest wingspan at 3.5 metres.
Distances are hard to measure, but one banded bird was recorded travelling 6000 km in twelve days.
They spend most of their life on the wing, returning to land only to court a mate and to breed.
The female Albatross lays just one egg that can weigh 1.2lb (0.5kg), in a basic nest on the ground.
The parents take it in turns to incubate the egg for 2-3 months depending on the size of the Albatross species.
Chicks can take anywhere from 5 to 10 months to fledge, depending on the size of the Albatross species.
Albatross are very long living Birds with an average age of between 40 and 50 years old. 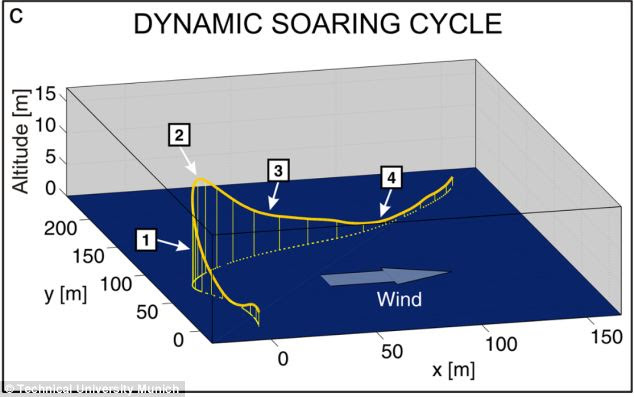 Each dynamic soaring cycle consists of (1) a windward climb, (2) a curve from wind at the upper altitude, (3) a descent and (4) a curve from the wind at a low altitude, close to the sea surface
Dynamic soaring involves the birds gaining height by angling their wings while flying into the wind.
The technique involves flying from the relatively windless layer close to the ocean waves into a region of much faster winds above it.
This gives the birds a boost in airspeed that allows them to soar 30 to 50 feet into the air.
Then they turn, gliding with the wind to get an additional speed boost while swooping downward close to the sea waves.
By repeatedly using this method, the wandering albatross can travel thousands of miles without flapping its wings.


They found that albatross could soar dynamically as long as the wind speed is a bit more than 30 kilometers per hour (16 knots).
Their results also indicated that the shear wind field alone could enable the flight of the birds.

While the albatross had existed for about 50 million years, today it is estimated that fishing vessels kill one albatross every five minutes.
Longlining poses the greatest single threat to seabirds worldwide.
Boats cast lines up to 80 miles long carrying thousands of baited hooks, which trap the birds and drag them under - drowning them.
All 22 species are in trouble with eight currently critically endangered.