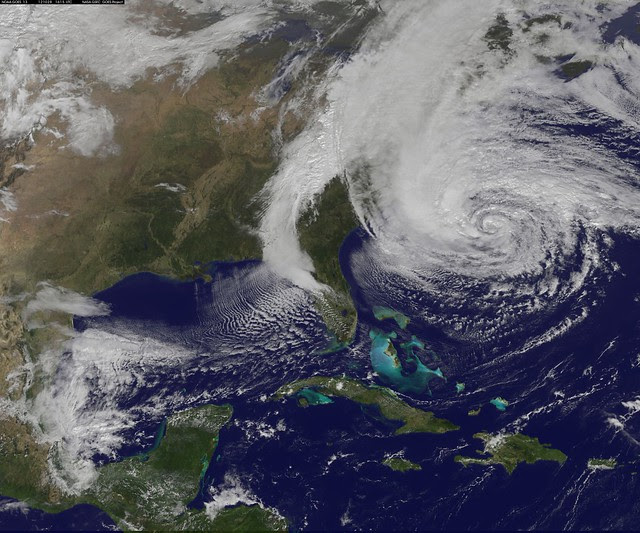 NOAA's GOES-13 satellite captured this visible image of the massive Hurricane Sandy on Oct. 28 at 1615 UTC (12:02 p.m. EDT).
The line of clouds from the Gulf of Mexico north are associated with the cold front that Sandy is merging with.
Sandy's western cloud edge was already over the Mid-Atlantic and northeastern U.S.
Credit: NASA GOES Project

Ahead of the 2013 Atlantic Hurricane Season and in the wake of Hurricane Sandy, the National Weather Service announced Thursday that it is changing its policy on the issuance of tropical storm and hurricane watches and warnings.
The changes will give forecasters more flexibility in issuing hurricane warnings, and streamline the authority for issuing such warnings.

Beginning on June 1, the agency will be permitted to leave watches and warnings in effect even if a hurricane transitions into a post-tropical cyclone, which technically speaking is a different type of storm than a storm of purely tropical origins, provided that the storm still poses “a significant threat to life and property.”

The agency’s procedures came under criticism after forecasters decided not to issue hurricane warnings as Hurricane Sandy approached the Mid-Atlantic coast, since the storm was transitioning from a hurricane into a post-tropical storm.
Based on policies in place at the time, forecasters would have had to cancel hurricane warnings once the storm completed that transition, and they feared that would confuse the public and the emergency management community.

However, critics argue that by not issuing hurricane warnings at all, and instead posting a plethora of high wind, coastal flooding, and other watches and warnings, the Weather Service may have downplayed the risks from Sandy, and caused some people to remain in their homes that were then subject to the storm’s record storm surge along the New Jersey, New York, and Connecticut coastlines.
According to a recent report from the reinsurance company Swiss Re, Sandy caused an estimated $70 billion in total damage and $35 billion in insured losses.

The lack of hurricane warnings during Sandy also has had implications for the insurance industry, since most hurricane-insurance policies contain deductibles that only kick in if a hurricane warning is in effect at the time that the home is damaged.
This means that insurance companies may be on the hook for a greater percentage of losses than if a warning had been issued.

In addition to allowing tropical storm and hurricane watches and warnings to remain in effect after a hurricane transitions into a different type of storm, the new policy would keep the National Hurricane Center in Miami in charge of all forecast products until the storm no longer poses a significant threat. During Hurricane Sandy, responsibility was passed from the Hurricane Center to local NWS offices, which resulted in inconsistent communications and warnings being issued from one state to another.

“Our forecasters now have more flexibility to effectively communicate the threat posed by transitioning tropical systems,” NWS director Louis W. Uccellini said.
“Sandy’s forecast was remarkably accurate and under a similar situation in the future, forecasters will be able to choose the best option to underscore the urgency involved.”

According to an NWS statement, the policy change, which was first proposed during an annual NOAA hurricane conference in November, is supported by preliminary findings from NOAA’s service assessment on Sandy, which is slated to be released in May.
The NWS released an example of a statement that would be issued for a hypothetical hurricane named "Mandy," which states: "Mandy loses tropical characteristics but hurricane warnings remain in effect. Mandy expected to bring life-threatening storm surge and hurricane-force winds to the coast this afternoon."