Image of the week : Great Blue Hole in the Belize Barrier Reef 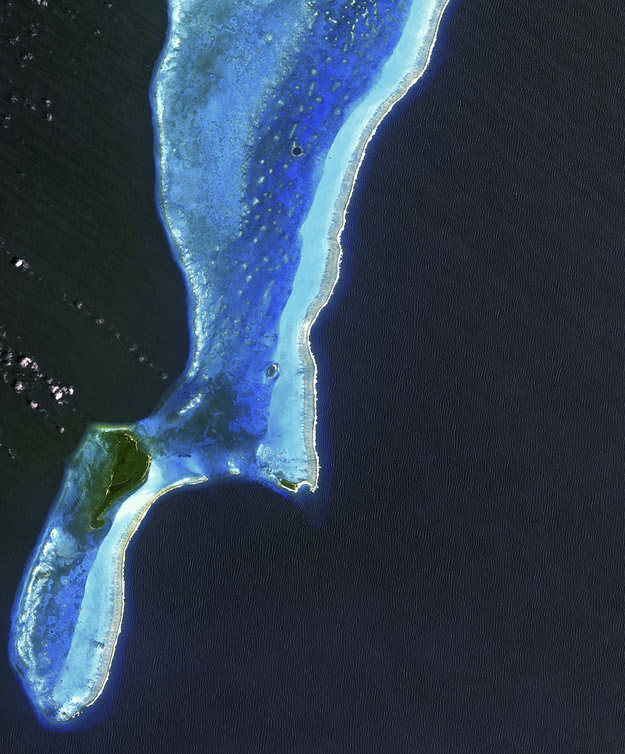 The Lighthouse Atoll in the Belize Barrier Reef is featured in this image acquired by Japan’s ALOS satellite.
In the upper-central part of the image, an underwater sinkhole known as the Great Blue Hole appears as a dark blue circle.

Surrounded by the shallow waters of the coral reef, the Great Blue Hole measures over 300 m in diameter and about 123 m deep.
Formed when the sea level was much lower, rain and chemical weathering eroded the exposed terrain.
Water later filled the hole and covered the area when the sea level rose at the end of the ice age.

Also visible in the image are two coral islands – green with vegetation – called cayes.
The larger to the west is Long Caye, and the smaller Half Moon Caye is to the east.

As part of the Belize National Parks, the Half Moon Caye Natural Monument was the country’s first protected area.
The almost 40 sq km island is an important breeding area for the seabird, the Red-footed Booby.

The greater Belize Barrier Reef has been a UNESCO World Heritage Site since 1996, but in 2009 it was put on the List of World Heritage in Danger.
The reef provides a significant habitat for threatened species, including marine turtles, manatees and the American marine crocodile.

The Advanced Land Observing Satellite captured this image on 29 March 2011 with its Advanced Visible and Near Infrared Radiometer, which is designed to chart land cover and vegetation in visible and near-infrared spectral bands, at a ground resolution of 10 m.