After lying on the ocean floor for more than 40 years, two Apollo rocket engines that helped deliver astronauts to the moon are once again seeing the light of day.

A team organized by Jeff Bezos spent three weeks fishing at sea to recover the corroded F-1 engines, which sat more than 4 kilometers below the surface of the Atlantic Ocean.
Bezos does not yet know precisely which Apollo mission the engines flew on as the original serial numbers on the objects are missing.
He is hoping they are the Apollo 11 engines that brought the first men to the moon.
On Mar. 20, his team’s ship was heading back to Cape Canaveral in Florida with the aged pieces to restore them and perhaps determine which mission they came from. 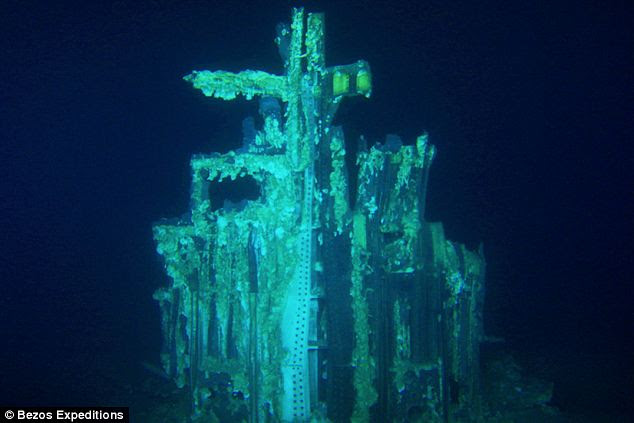 One of the Saturn V Stage Structures used to hold the components together, pictured on the seabed

“We’ve seen an underwater wonderland – an incredible sculpture garden of twisted F-1 engines that tells the story of a fiery and violent end, one that serves testament to the Apollo program,” Bezos wrote in a blog post.
“We photographed many beautiful objects in situ and have now recovered many prime pieces. Each piece we bring on deck conjures for me the thousands of engineers who worked together back then to do what for all time had been thought surely impossible.”

Billionaire Bezos, founder and CEO of Amazon.com, announced his intentions to pull the Space Age relics up from the depths almost exactly one year ago.
Little has been heard about the endeavor since then but that’s often how Bezos works.
His private rocket company, Blue Origin, is probably the most secretive new corporation getting into the commercial launch business. 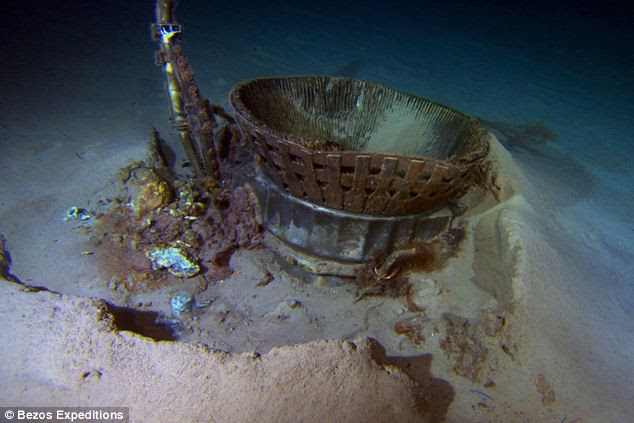 Pulling the F-1 engines up was a tremendous engineering challenge.
The team used remotely operated vehicles tethered with fiber optic cables to work in the black depths at the bottom of the Atlantic.
After restoring the engines and stabilizing them to prevent further corrosion, Bezos hopes to display them at the Museum of Flight in Seattle, though the ultimate decision for where to put them will probably involve NASA.

“This is a historic find and I congratulate the team for its determination and perseverance in the recovery of these important artifacts of our first efforts to send humans beyond Earth orbit,” wrote NASA Administrator Charles Bolden in a statement about the recovery.
”We look forward to the restoration of these engines by the Bezos team and applaud Jeff’s desire to make these historic artifacts available for public display.”

The F-1 engines flew on the gigantic Saturn V, still the largest and most powerful rocket ever built in the U.S. Each engine is nearly 6 meters tall and 4 meters wide and weighs more than 8,000 kg.
They produced 7.7 million pounds of thrust and brought the Saturn V to nearly 58 km above the Earth at a top speed of and to a speed of almost 10,000 km/hr.