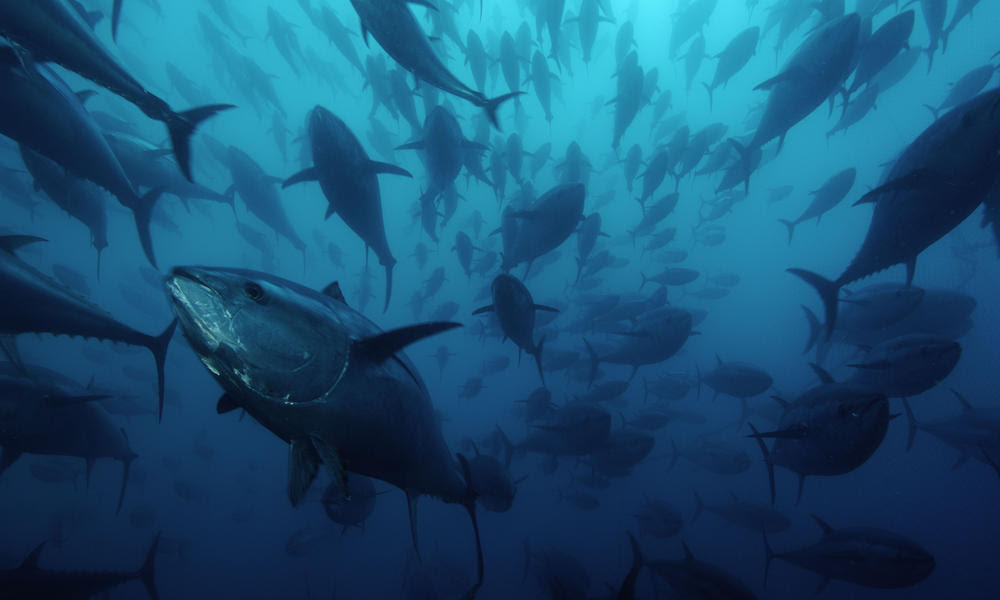 
The oceans are changing faster today and in more ways than at any time in human history.
We are the cause.
Which is why I welcome the launch of the Global Ocean Commission, dedicated to ending the neglect, in international affairs, of the high seas.
These seas lie far beyond the horizon – 200 nautical miles offshore to be precise – and begin where sovereign national waters give way to the global commons, owned by none, shared by all.

There was a time when foreign travel gave many people a familiarity with the high seas.
Rather than a few hours in a plane, "long haul" often meant days or weeks spent staring at an endless canvas of sea and sky.
Today, few of us know much about what happens beyond the horizon and still fewer care.
Like all common spaces, the high seas are vulnerable to misuse and abuse.
Our indifference is costing the world dear for the high seas are being plundered.

For most of our maritime history, the open oceans have been seen as dangerous places to be traversed as quickly as possible.
Remote and enduring, they were home to giant fish and whales; seabirds wandered their featureless expanses and ancient corals grew in the eternal darkness of the abyss.

Despite an increased awareness of overfishing, the majority of people still know very little about the scale of the destruction being wrought on the oceans.
This film presents an unquestionable case for why overfishing needs to end and shows that there is still an opportunity for change.

Whalers were first to spot the high seas' potential as a source of wealth, slaughtering their way through the 19th and 20th centuries until the great whales were a few breaths from extinction. Ocean-going seabirds such as albatross and petrels were also early victims of exploitation due to the vulnerability of coastal nesting sites.
But commercial fishing was a relative latecomer.
Fishing began in earnest in the 1950s as long-line and drift-net fleets sought profit in open ocean species such as tuna, swordfish, marlin and shark.
By the 1980s, they were everywhere.
The huge collateral damage done by these fisheries soon caused alarm.
Drift nets spread lethal curtains tens of miles long killing indiscriminately, taking turtles, whales and dolphins alongside the target fish.
They were banned by the UN in 1992 but long lines studded with tens of thousands of hooks continue the massacre.
Enough long lines are set every night to wrap around the globe 500 times.

In a separate development, from the 1960s, Soviet and European vessels began to probe deeper in response to the decline of their shallow water fish stocks.
They found riches on the Atlantic frontier, where continental shelves fall away into the deep, and around the summits of submerged offshore mountains.
But these fisheries have proved highly vulnerable to overexploitation.
Within the space of a few decades, species such as the roundnose grenadier and orange roughy have become so depleted they are considered threatened with extinction.
Deep sea fisheries carry another high cost in loss of coral forests and sponge groves.
Life is glacial in the frigid inkiness of the deep, so these habitats have developed over thousands of years, sustained by table scraps sinking from a narrow surface layer where sunlight fuels plant growth.
The bottom trawls that are used to catch fish cut down animals that are hundreds or even thousands of years old.

Without ever making a conscious decision to do it, we are losing unseen habitats whose equals on land would include the giant redwood glades of North America, the baobabs of Madagascar and Amazon rainforest.
Where are the regulators in all of this?
Many high seas fisheries have little or no protection.
Regional fisheries management organisations, where they exist, have been charged by the United Nations with management of fish stocks such as tuna.
The best of them are sleeping on the job; the worst, as with the "management" of the endangered Atlantic bluefin tuna, make decisions in the full knowledge that what they are doing is destroying what they are supposed to protect.

Fishing is not the only problem.
Remote as they seem, the high seas are no further than anywhere else from the inescapable influence of climate change, nor are they beyond the reach of pollution.
Mercury and industrial emissions from power plants and industry shed their toxic loads far out to sea. Chemicals concentrate in the surface layer that separates air from water and can quickly leapfrog across thousands of miles of ocean in wind-whipped aerosols.
Circulating currents gather the floating refuse of modern society into enormous regions that have been dubbed the "great ocean garbage patches".
Over the years, drifting plastics fragment into ever-smaller particles that pick up and concentrate chemical pollutants such as mercury and DDT.
Small fish mistake plastics for food and pass chemicals up the food chain until they reach the flesh of animals we eat, like tuna and sharks.
What goes around comes around.

This video features David Roberts of Grist
promoting general awareness of the science of climate change.

If this were all we had to fix, it would be challenge enough.
But there is more.
Climate change is enlarging the deserts of the sea as surely as it is doing so on land.
Surface waters of the open ocean have all the light but few nutrients, which severely limits productivity.
Most of the time, upward mixing of nutrients is inhibited by a density barrier between the warm and light surface layer and cold, dense water below.
Global warming is heating the surface ocean, making it even harder to cross between these layers. This in turn is starving deeper waters of oxygen that has to mix downwards from the atmosphere and surface plants.
The living space in the oceans is shrinking.


Ever wondered what impacts all that carbon dioxide we emit is having on the ocean and what consequences this could have for the future?
This Google Earth Tour, narrated by Dan Laffoley from the International Union for Conservation of Nature (IUCN), who is Chair of Europe's Ocean Acidification Reference User Group, takes us on a global journey to understand what impact carbon dioxide has on ocean chemistry.
It explores the phenomenon of ocean acidification and explains why even small changes to ocean chemistry could have profound implications for marine life and future economic activities.

There is one final blow to the integrity of the oceans that may yet prove the heaviest of all.
Carbon dioxide from fossil fuels is building up in the sea as well as the atmosphere.
There, it forms carbonic acid (as in fizzy drinks).
Acid is the nemesis of carbonate, the basic ingredient of chalk and a fundamental building block of ocean life, including shellfish, corals and plankton.
If we do nothing to curtail emissions, ocean acidity will soar by the century's end toward levels not experienced for 55 million years in a period of runaway global warming.
It is difficult to predict the exact outcome, but let's just say that last time around, corals and chalky plankton suffered badly.

We carry on today much as we have done for thousands of years, using natural resources as if they were endless.
But population growth changes everything.
We must get to grips with the consequences of our planetary dominance, otherwise the consequences will master us.
Out of sight and out of mind they may be, but the high seas are vital to everyone.
By virtue of their sheer size they play a dominant role in the processes that keep our world habitable. They are too big for us to let them fail.
The Global Oceans Commission has urgent work to do.