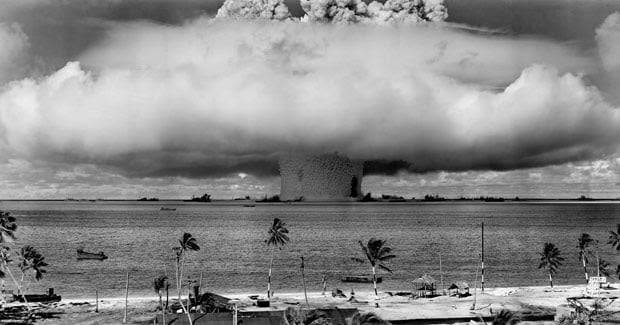 In in 1946, the United States conducted a series of nuclear weapon tests at Bikini Atoll in what’s known as Operation Crossroads.


Bikini Atoll (Marshall islands) NGA chart 81544
with 'prohibited area' indication for the target area, East side of the atoll
All 167 native residents were moved 128 miles (206 km) east to the uninhabited Rongerik Atoll.


A total of two bombs were detonated to test the effects nuclear blasts had on naval warships.
The second, named Baker, was the world’s first nuke to be detonated underwater.
Due to the unique properties of underwater explosions, the Baker test produced a number of unique photographs that the world had never seen before.

Wikipedia states that “photographs of Baker are unique among nuclear detonation pictures”:

The blinding flash that usually obscures the target area took place underwater and was barely seen. The clear image of ships in the foreground and background gives a sense of scale.
The large Wilson cloud and the vertical water column are distinctive Baker shot features, making the pictures easily identifiable. 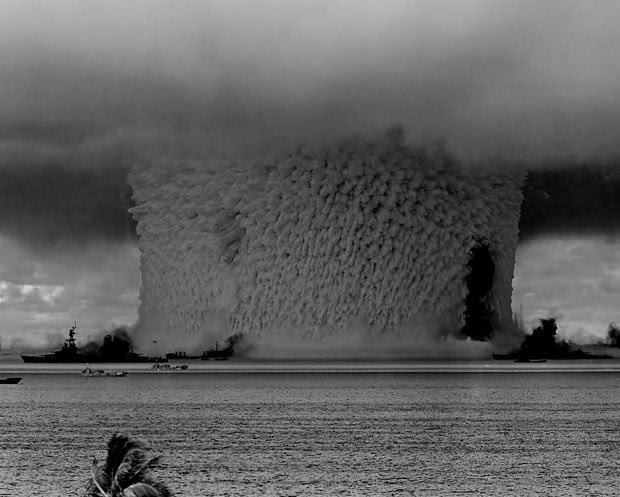 The photograph above is an eerily beautiful image shot from 3.5 miles away showing the massive vertical water column.
Here’s a crop to give you a better sense of scale.
That black thing on the right side of the column is one of the massive ships being lifted into the air. 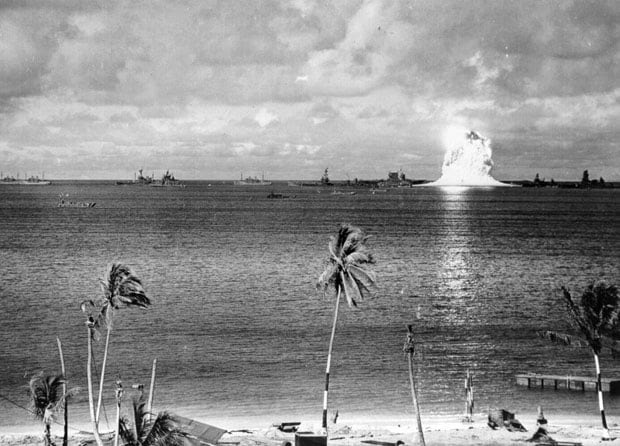 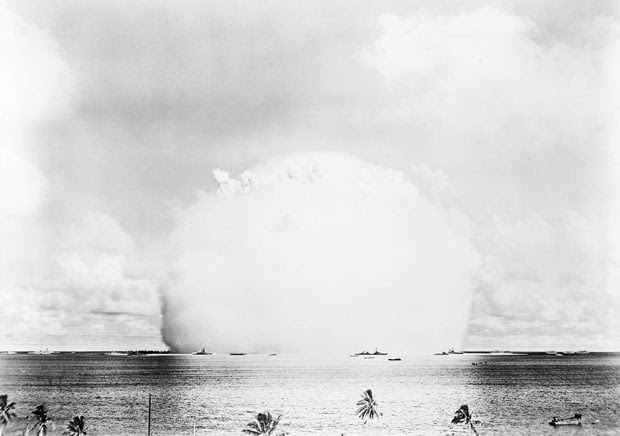 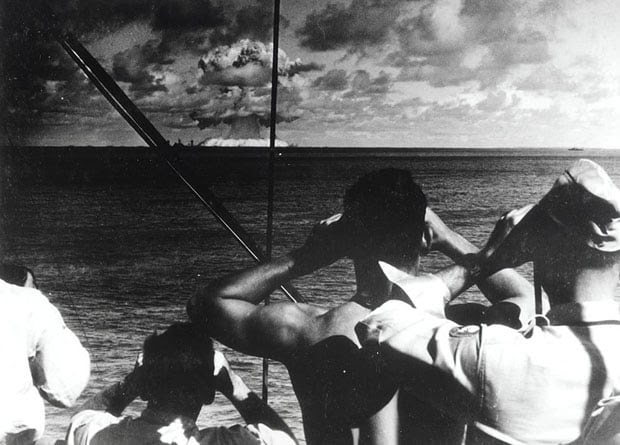 Crossroads Baker, showing the white surface "crack" under the ships, and the top of the hollow spray column protruding through the hemispherical Wilson cloud. Bikini Island beach in the background. 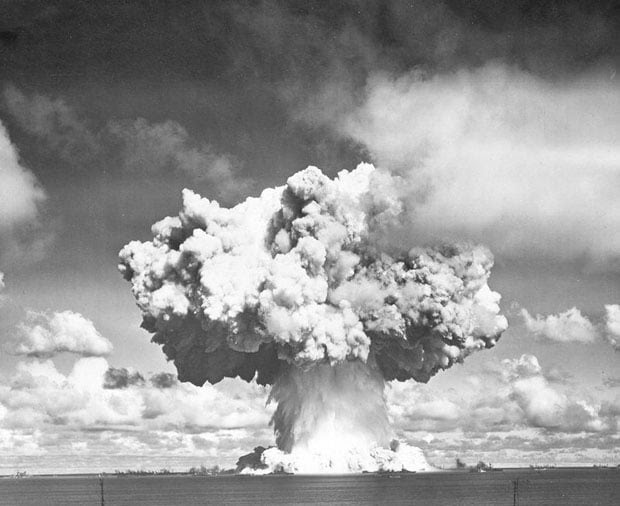 The Wilson cloud has evaporated revealing the cauliflower atop the spray column.
Two million tons of water spray fall back into the lagoon.
The radioactive base surge is moving toward the ships.


The event was also captured on film:

A 1946 test of a 23-kiloton nuke, named "Baker", 27 meters underwater.
This was part of Operation Crossroads.
The tidal wave from the blast rose over 2 miles high.


There were many issues with cleaning up after the test, the life expectancy of people involved was reduced by an average of three months, and the test was later referred to as, “the world’s first nuclear disaster.” 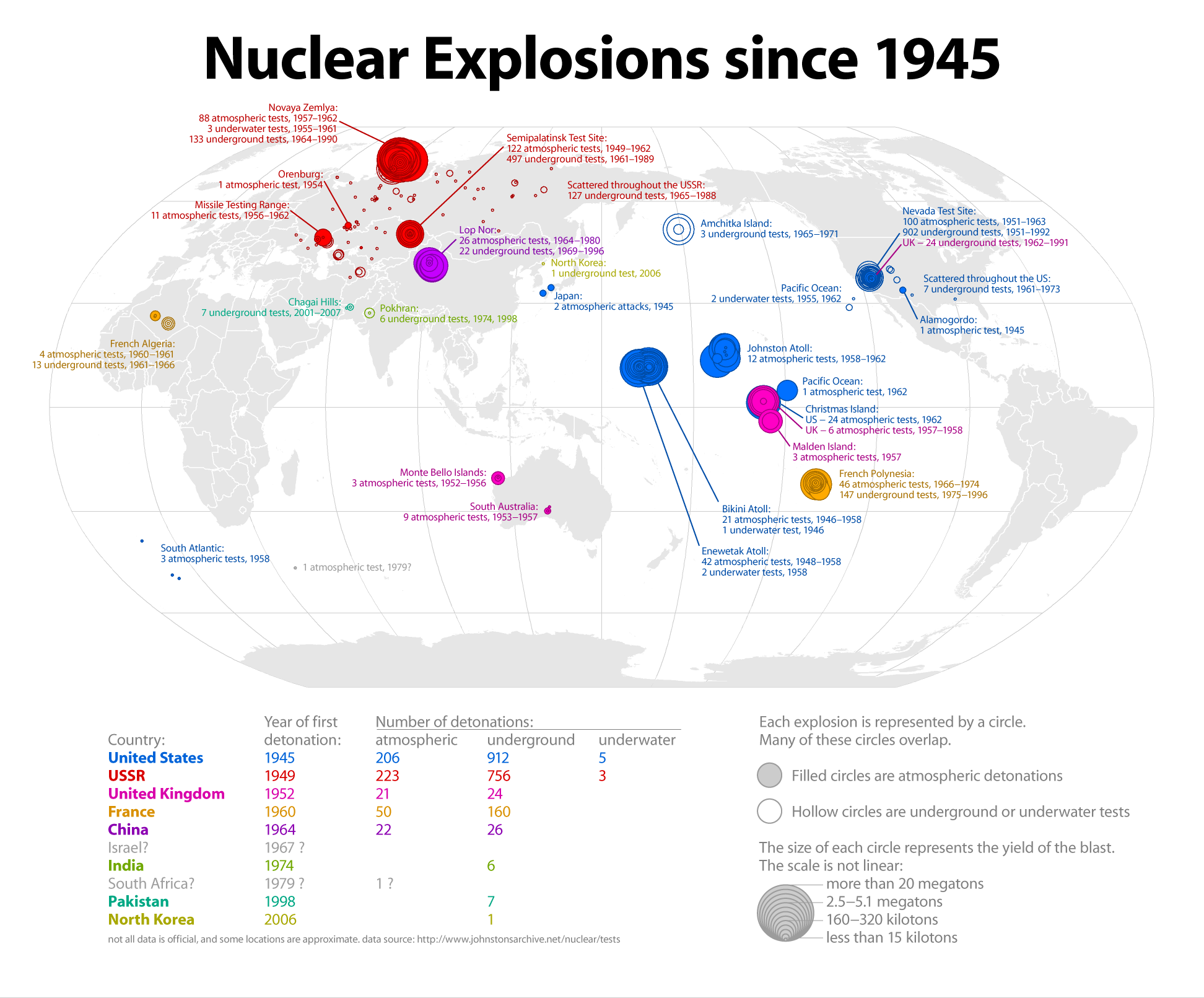