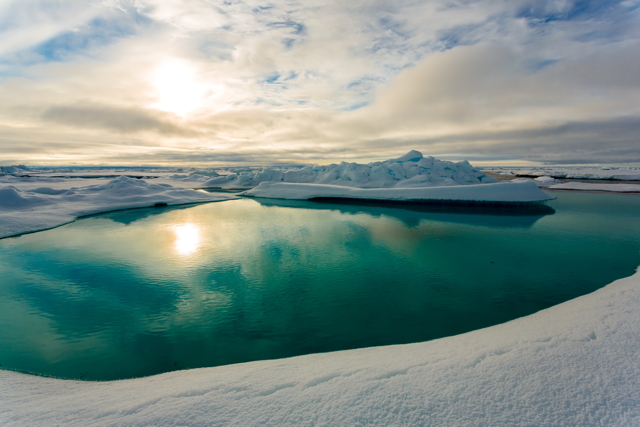 During the Arctic spring and summer, ponds of freshwater appear on the melting ice, dotting the landscape with a dazzling range of blues.

Despite their beauty, these melt ponds are a harbinger of climate change in the Arctic, according to a new study by researchers at the Alfred Wegener Institute in Germany.
The pools form more easily on young ice, and young ice now accounts for more than 50 percent of the Arctic sea ice cover.
The ponds also absorb more of the sun's heat, helping ice melt faster, the study finds.

Graphic depiction of the amount of sunlight above and underneath the Arctic sea ice.
The growing coverage of the ice by darker meltponds increases the share of sunlight, which passes the sea ice.
That means, the space underneath the ice becomes brighter and warmer.
Furthermore less sunlight is refleced back into the atmosphere.
Graphic: Marcel Nicolaus/Yves Nowak, Alfred Wegener Institute

To test the effect of the melt ponds on sea ice, scientists from the institute traveled to the Arctic aboard the research ice breaker RV Polarstern during the summer of 2011. 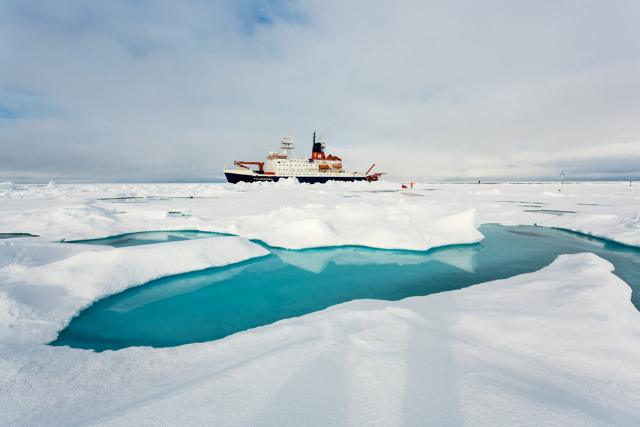 They analyzed how far the sun's rays penetrated the ice with a remotely operated underwater vehicle equipped with radiation sensors and cameras.

Photo, taken by the ROV during its dive through deformed sea ice.
The marker bars are one meter long.
In the background one can see that more sunlight passes the sea ice, because the ice is covered by meltponds.
The numbers and symbols, which are faded in, tell the direction and position of the ROV.
They are needed by the pilot to steer the underwater roboter.
Photo: Alfred Wegener Institute

Arctic sea ice has become distinctly thinner and younger in the past decade, the researchers said in a statement.
The amount of 3-foot-thick (1 meter), multiyear ice, which lasts through seasonal melts, is declining.

This older ice has a rough surface, created by the constant motion from currents and collisions.
Far fewer and smaller ponds appear on this uneven surface, though they were considerably deeper than the flat ponds on the younger ice, the researchers found.

Aerial photo of polar researchers working on sea ice.
Some of them belong to the AWI sea ice physics group.
They have ericted a tent, in which the steering console of the ROV (Remotely Operated Vehicle) "Alfred" is stored.
Photo: Stefan Hendricks, Alfred Wegener Institute

But almost half of the thin, year-old ice floes are extensively covered with melt ponds, the researchers discovered.

"The decisive aspect here is the smoother surface of this young ice, permitting the melt water to spread over large areas and form a network of many individual melt ponds," Marcel Nicolaus, a sea ice physicist and melt pond expert at the Alfred Wegener Institute, said in the statement.
Young, thin ice with many melt ponds allowed three times as much light to pass through than older ice, Nicolaus said.
It also absorbed 50 percent more solar radiation, which causes more melting and means the thin ice reflected less of the sun's rays than thick ice.
"The ice melts from inside out to a certain extent," Nicolaus said in the statement.

The research team is now investigating how additional sunlight will affect organisms that live on and beneath the Arctic ice, such as algae that clings to the ice floes.

"We assume that in the future, climate change will permit more sunlight to reach the Arctic Ocean — and particularly also that part of the ocean which is still covered by sea ice in summer," Nicolaus said.
"The sea ice will become more porous, more sunlight will penetrate the ice floes and more heat will be absorbed by the ice. This is a development which will further accelerate the melting of the entire sea ice area," Nicolaus said.