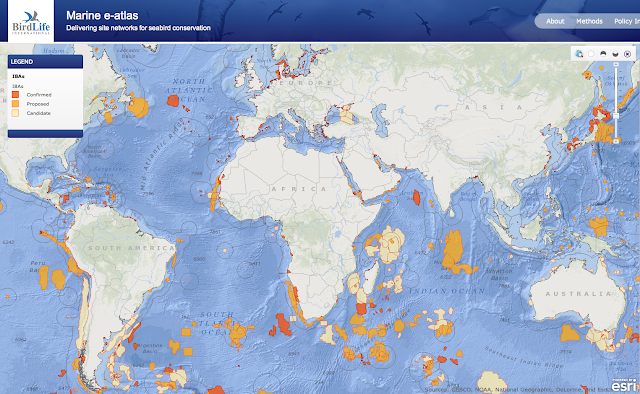 A new atlas of the world's oceans issued on Tuesday shows more than 3,000 sites important to seabirds as part of a drive to improve conservation.

The free online atlas could help governments plan, for instance, where to set up wildlife protection areas at sea or where to permit offshore wind turbines or oil and gas exploration, they said.
The atlas, showing areas vital to birds including pelicans, sandpipers, cormorants and skuas, was compiled by BirdLife International, drawing on work by 1,000 bird experts, government ministries and secretariats of UN conventions.
"Seabirds are now the most threatened group of birds.
They present unique conservation problems, since many species travel thousands of kilometres across international waters," BirdLife International said in a statement.

It identifies more than 3,000 important bird areas (IBAs) worldwide, such as breeding grounds and migration routes, covering in total 6.2% of the world's oceans.
"Our initial target is to encourage governments to use this tool and use this data in their national planning," Ben Lascelles, BirdLife's global marine IBA co-ordinator, told Reuters.
He said that Japan, for instance, had recently consulted BirdLife about where to site offshore windfarms to avoid damage to migratory birds.

The atlas was unveiled at a UN conference on biological diversity in Hyderabad, India.
Areas such as off the tip of South Africa where or the Pacific off South America were among the most important "hotspots" for birds.
The atlas might also lead to the development of other global marine maps, for instance for turtles, whales or sharks, and encourage governments to identify where to site marine protected areas.
Governments have set a goal of protecting 10% of the entire area of the oceans by 2020.
"People have often cited a lack of data as a reason for inaction for protection and management of sites, particularly on the high seas," Lascelles said.
"This is showing that there is a lot of data out there."
Posted by Peio at 1:13 AM