Book in the spotlight : The Mortal Sea, fishing the Atlantic in the age of sail

Convinced that the time has come for historians to take the living ocean seriously, University of New Hampshire history professor Jeffrey Bolster has written a new book—The Mortal Sea: Fishing the Atlantic in the Age of Sail.
In the book, Bolster takes readers through a millennium-long environmental history of human impact on the ocean.

Recently, Mission Blue caught up with Professor Bolster.
Read the Q&A below to find out about the inspiration behind the story, what interesting things didn’t make it into the volume, and how writing this book changed Professor Bolster’s own view of the ocean.

"The only noble thing a man can do with money is to build a schooner."
- Robert Louis Stevenson

Can you briefly describe what inspired you to write The Mortal Sea?

I've spent a lifetime messing around in boats, and as a young man I was a commercial seaman for ten years.
Back then, before I understood the plight of the living ocean, I caught a lot of fish.
More recently, as a historian of early America, I was convinced that the time had come for historians to take the living ocean seriously, and to include its stories in our work.
I wanted to reconstruct a vivid history peopled by individuals making what, they hoped, were the best decisions in the circumstances they faced.
But I also wanted to tell a story sufficiently large to show dramatic changes in the sea over time, a story that would peel back layers from a supposedly "traditional" past.

What was the most interesting or shocking thing you learned while writing this book?

The most shocking revelation was that serious conversations about the need to conserve the ocean's living resources had been occurring for a VERY long time.
In 1873, for instance, "the restoration of our exhausted cod fisheries" was a major concern of the U.S. Fish Commission, because commercial fishermen insisted that the government do something to preserve the stocks on which their livelihoods depended.
From the 1850s to about World War One, fishermen led the charge for conservation.
They wanted to keep fishing, but they wanted fish for the future, and they were very concerned about the depletions occurring right before their eyes. 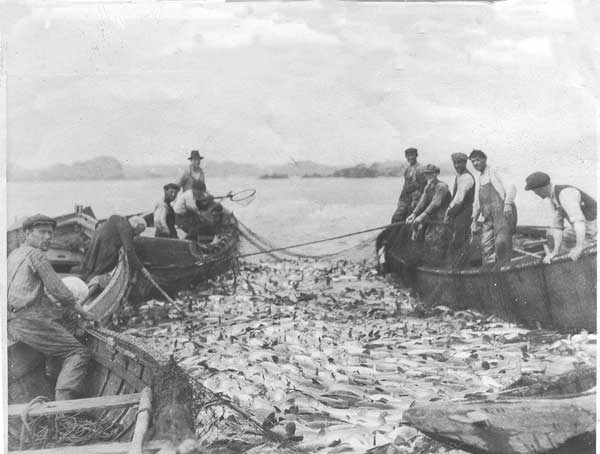 Was there anything that you found to be interesting or important that didn't make it into the book? If so, what?

I had considered, as part of Chapter One, writing about human impact on the Mediterranean during the era of the Roman Empire.
But I decided that was going back too far, and that the Mediterranean was not part of the boreal North Atlantic -- my chief focus.
So I started the story in the Middle Ages, when Viking invaders became the fishmongers to Western Europe, bringing the technologies that would allow coastal Europeans to catch true sea fish.

What do you see as the biggest threat to the world's ocean?

The threats today are numerous, and include ocean acidification, plastic particulates suspended in the water column, and overfishing.
Governments and societies could do something about all three of those, but overfishing stands out as the problem with far-and-away the deepest roots.

Who do you hope reads this book and why?

It's for everyone who cares about the ocean, and is moved by its moods and fogs, its mysteries, its diurnal tidal pulse, and its impact on peoples' imaginations.
Ideally, I would like fisheries managers and politicians to read it because it drives home several crucial points.
One: overfishing is by no means a recent phenomenon.
Two: Ecological time functions on a very different scale from the two-year and four-year political cycles that drive policy.
It took us centuries to make a colossal mess of North Atlantic ecosystems.
We shouldn't delude ourselves that we can "fix" the problem soon.

What do you hope people will take away from the book?

That without genuinely historical perspectives on changes in the sea we can have no idea of the magnitude of the restoration challenges we face.

Has writing this book changed your own view about the ocean? If so, how?

I have spent thousands of days and nights underway in the North Atlantic and Caribbean Sea, and I used to think I knew something about the sea.
Now I sense that my generation (I'm 58 years old) may have been the last to come of age influenced by the flawed assumptions that the sea was immortal.
As late as 1951 someone as perceptive as Rachel Carson could write that mankind "cannot control or change the ocean, as in his brief tenancy of earth, he has subdued and plundered the continents."
She called it wrong, and were she alive today she would want to know how we had been so myopic.
My book explains that story.
And the first line of the Epilogue conveys my current appreciation of the situation.
"In its immensity and fragility the sea has never been equaled."