A census of the ocean

Oceanographer Paul Snelgrove shares the results of a ten-year project with one goal: to take a census of all the life in the oceans.
He shares amazing photos of some of the surprising finds of the Census of Marine Life.
"We can only sense that in the deep and turbulent recesses of the sea are hidden mysteries far greater than any we have solved."
~ Rachel Carson, 1907-1964.
From TheGuardian

Oceans cover more than 70% of the surface of Earth, and contain a large portion of Earth's biodiversity, much of it still unknown.
Further, we know more about the surface of the Moon and Mars than we know about the floor of the world's oceans.
To remedy this knowledge deficit, the Census of Marine Life programme was initiated to catalogue and study the distribution, diversity and abundance of life in the oceans.
The census revealed how diverse, surprising, still vastly unknown, and tenacious life is in the oceans. 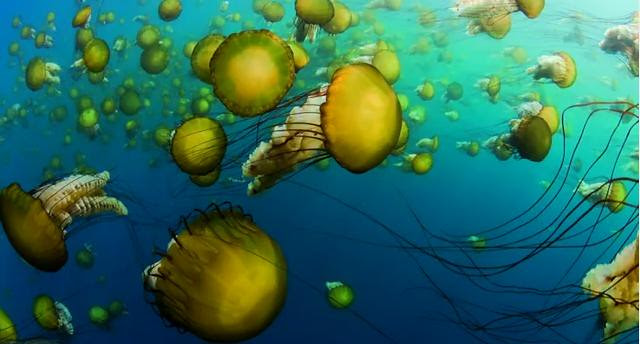 Screen grab
In this disturbing and fascinating video, oceanographer Paul Snelgrove shares some of the results of this ten-year project.
Professor Snelgrove, who compiled the data collected by this decade long marine census into a book, tells how shifting baselines have obscured our view of the loss that oceans have suffered as a result of human over-exploitation and shows us some of the amazing tools used to investigate oceanic habitats.
So far, more than 6,000 potential new species have been discovered, so Dr Snelgrove shares photographs of a few of his favourite newly discovered species.
Posted by Peio at 1:47 AM