From HuffingtonPost and other sources

The Dutch navy says it has discovered the sunken wreck of a German World War I submarine off the island of Terschelling and will designate it a war grave.

-> localization with the Marine GeoGarage

The Defense Ministry says the wreck of the SM U-106 is lying on the seabed 40 meters (130 feet) underwater and 65 kilometers (40 miles) north of Terschelling, an island in the Wadden Sea off the northern Netherlands.

The rusting remains of the submarine, photographed by the Remus ROV (credit : Dutch Navy)
The submarine was first discovered in October 2009 during hydrographical research by HNLMS Snellius, but the find was only announced 16th March after the Dutch Defense Ministry authorities confirmed its identity with German authorities and inform descendants of the crew.

"This type of discovery almost always happens by chance," said Jouke Spoelstra, the expedition leader of the identification project. "Some ten years ago, one of the ships of the Hydrographic Service passed by the exact same location, but then the boat was under a layer of sand. The submarine will be left where it is and will be made an official war grave. A commemoration ceremony could be held at sea, but that will only be done on the investigation of the families."

Following the discovery, the mine hunter HNLMS Maassluis searched the area in December 2009, using a wire-guide underwater camera.
The investigation confirmed that the shipwreck was a submarine.
Two months later, the HNLMS Hellevoetsluis launched the underwater robot Remus to further investigate the wreck.
Divers from the Navy's Diving and Explosive Ordnance Disposal Group were able to recover a cylindrical air tank that was used by WWI submarines to dive and surface.
A copper plate bearing the serial and the submarine numbers on the air tank clearly identified the wreck as SM U-106.

A brass plaque on an air bottle from a recently discovered First World War German submarine as it is displayed in the North Sea, north of the Dutch island of Terschelling.
Photograph by: Royal Dutch Navy, AFP/Getty Images
The sub sank on 7 October 1917 after hitting a mine on its maiden voyage (the SM U-106 was commissioned on 28 July 1917 under the command of Kapitänleutnant Hans Hufnagel and paticipated in one wartime patrol starting on 2 September 1917), with the loss of all 41 crew. 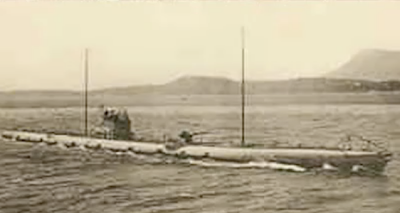 SM U-106
During its first voyage, the submarine had torpedoed two British ships : during the first Battle of the Atlantic, it was credited with the sinking of HMS Contest, an Acasta-class destroyer, and damaging “City of Lincoln,” a 5,867-ton steamer, in the Western approaches.
Normally the German U-boats would be guided through the mines by a surface ship capable of detecting the explosives, Dutch navy spokesman Lt. Col. Robin Middel told The Associated Press, but on its ill-fated voyage the sub ran into a newly laid British mine.
The sub "was to make a rendezvous with that ship, but the ship never found the submarine and nobody had ever heard anything more from it," Middel said.